Alice Cooper, King of Rock-and-Roll Theater, Is Better Than a Therapist

Alice Cooper at the Paramount Theatre, June 12, 2017. Tom Murphy
Alice Cooper, who performed in Denver on Monday, June 12, may still be the most prominent pioneer of shock rock, but the horror of his imagery has long been surpassed by others. The world has become beyond jaded to the terrifying antics that earned Cooper attention in the ’70s, before anyone could “YouTube” them or look up photos of his act on a search engine. Back then, going to a Cooper concert took us well out of our comfort zone. G.G. Allin, Marilyn Manson, GWAR, Insane Clown Posse and their ilk have happened since, making it hard to remember how Cooper caught the ire of parents and cultural conservatives with his on-stage persona and depictions of beheadings, hangings and electrocutions.

What has long separated Cooper from many of those he influenced is that his songs transcend the spectacle, and the spectacle serves the music. When Cooper appeared on stage in a straitjacket last night while being tormented by a creepy nurse, for “Ballad of Dwight Fry,” it was easy to forget that it was one of the earliest hard-rock songs to thoughtfully address mental illness and depression. Cooper's campy theatrics highlight the isolation and despair the song's all about. 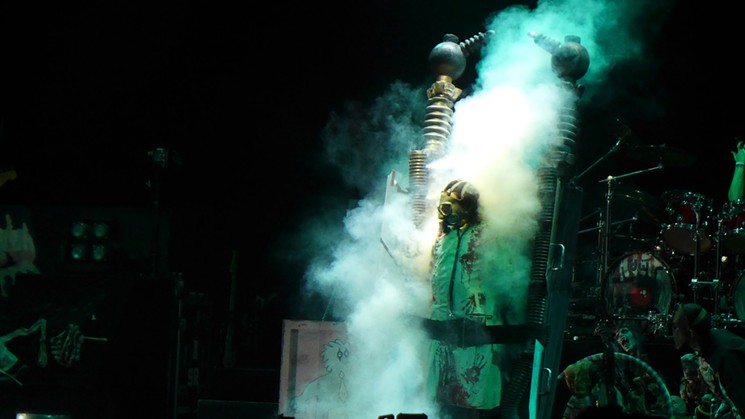 Alice Cooper at the Paramount, June 12, 2017.
Tom Murphy
Rather than leaning on projections or light shows that have become de rigueur in live music in recent years, Cooper used a painted backdrop enhanced by colored lights as well as basic set and costume changes with help from a giant Jack-in-the-Box on stage. Even at 69, Cooper marshaled and directed his own energy, and that of the band, like the conductor of an orchestra performing a familiar piece of music, while still conjuring the excitement of his early days. The band tapped into the nostalgia of the audience for classics like “Under My Wheels,” “I'm Eighteen” and “Welcome to My Nightmare.” It was pop-culture time travel, a throwback to an era when such songs stimulated our imagination, articulating and exorcising our neuroses and angst.

As a performer, Cooper adopts a persona that welcomes us to become part of the spectacle, allowing us to identify with and process otherwise socially unacceptable thoughts and feelings. What Cooper knows and never states explicitly is that being human means we're always having such emotions, and that a great rock or pop song is a healthy way to cope with our most troubling thoughts and impulses. But it's even more than that: Cooper transforms our personal darkness into celebration.

Alice Cooper at the Paramount, June 12, 2017.
Tom Murphy
If Cooper's show was some mundane presentation of great songs, it would still help purge the dark side of our psyches. His lyrics alone are enough to make our negative experiences feel relatable, without letting us get stuck in the pain. But his cheerful and energetic – yet sensitive and thoughtful – take on revenge, depression, death and repression in songs like “School's Out,” “Only Women Bleed,” “Poison” and the others proves that more than many performers, he understands the social function of theater as a vehicle for collective catharsis. He also knows how to share the knowledge that a little joyful, life-affirming, imaginative rock and roll in the face of real-life horror keeps existence from being incredibly dull.