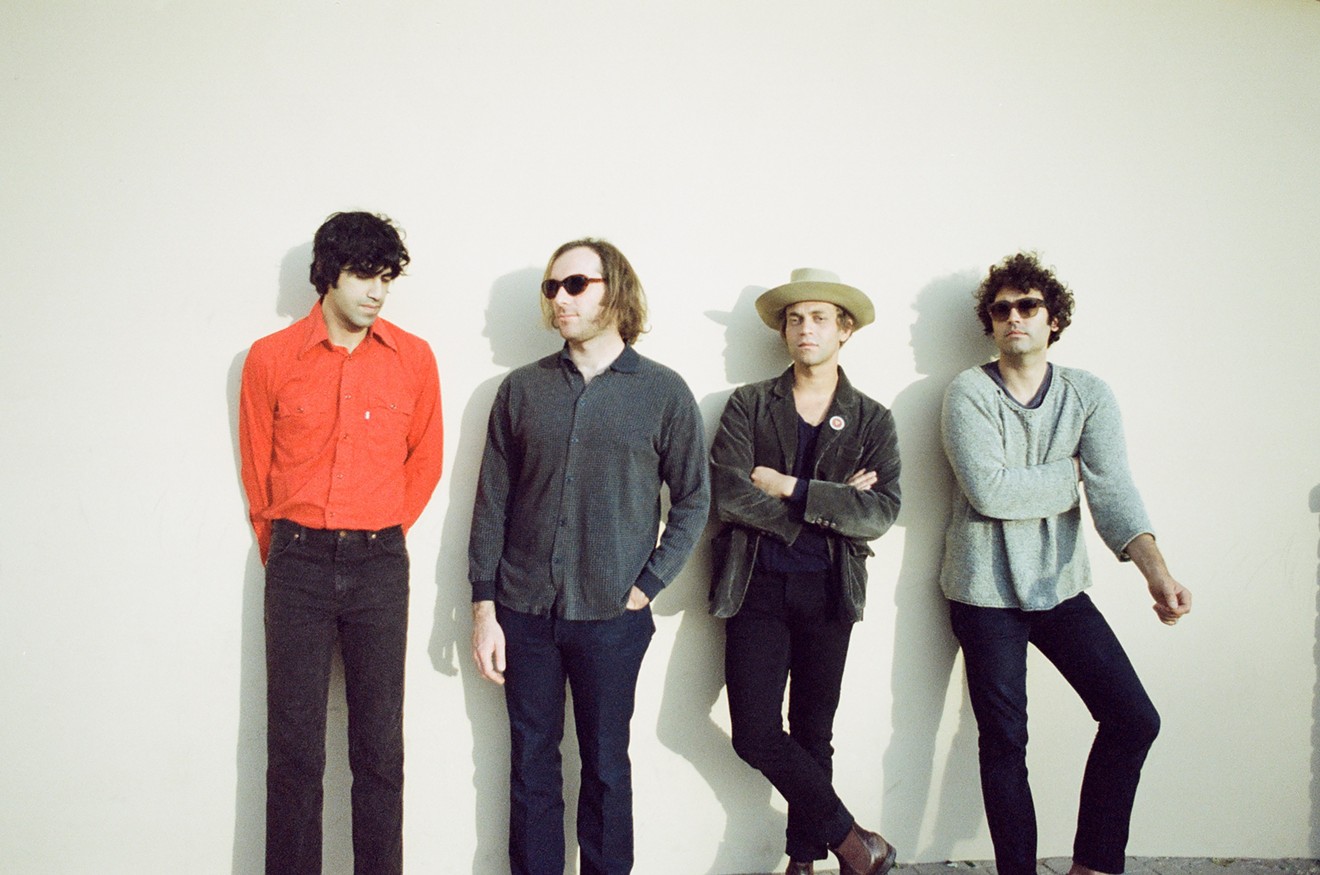 Allah-Las plays the Gothic Theatre on Friday, April 7. Laura Lynn Petrick
Since forming in 2008 and releasing a self-titled debut in 2012, Los Angeles quartet the Allah-Las have become a constant presence in this country's psychedelic-rock circuit.

The band’s most recent contribution to the genre, Calico Review, is a rock-solid and self-assured album comprising meandering psych-folk tunes sprung from the cracks of the Mojave Desert and warmed on the slopes of Laurel Canyon. Given the album’s West Coast vibes, it seems only fitting that the band chose to record at the storied Los Angeles-based Valentine Recording Studio, which hadsat untouched since its mid-century heyday. (Frank Zappa, the Beach Boys and Bing Crosby all took a spin through its production rooms.)

Westword caught up with guitarist Pedrum Siadatian via e-mail in advance of the group's upcoming appearances at Coachella — a truly Southern California institution if there ever was one — and an April 7 concert at the Gothic Theatre.

Westword: You’re about to play Coachella for the second time. Are you excited? Any crazy stories from the last time?

Since most of the band met while working at Amoeba Music, what were the first records you bonded over? Were there any bands or records that you loved that another member of the band hated?

We bonded over Can, the Velvet Underground, Spacemen 3 and garage compilations initially. In terms of bands that we don't agree on, I like the Stranglers but [drummer] Matt [Correia] doesn't.

What did you listen to growing up? What did your parents play around the house?

I just listened to whatever was on the alternative radio and MTV. I really liked the Beastie Boys when I was a kid, and I still have a soft spot for them. I remember my dad playing lots of UB40, Jethro Tull and Depeche Mode in the car.

You’ve had a bit of time between now and the release of Calico Review. How has your perception of the record changed since you released it?

I don't listen to our records after they're finished. I'll revisit it in a few years.

I read that your songwriting process for Calico Review was far more collaborative than on previous albums. What prompted that shift?

It's actually been less collaborative from Worship the Sun onward. The shift was kind of gradual. Basically we can all write songs and all sing to varying degrees, so it just seemed to suit us better.

It was a cool environment to record in. There's shag carpet on the walls.

Do you ever write on the road, or do you need to be at home or in the studio to focus?

I usually write lines here and there and then piece things together later when I'm at home.

How do you stay sane on tour?

The Great Barrier reefer and indulging in our most base humor.

Your sound is often described as quintessentially Californian. How do you feel about that label?

Don't really give a care, to tell you the truth.

You’ve been a band for the better part of the last decade. What’s the biggest lesson you’ve learned?

Lots of touring, going to Australia, Japan and Asia for the first time. Also an EP of covers will be coming out this summer.

KEEP WESTWORD FREE... Since we started Westword, it has been defined as the free, independent voice of Denver, and we'd like to keep it that way. With local media under siege, it's more important than ever for us to rally support behind funding our local journalism. You can help by participating in our "I Support" program, allowing us to keep offering readers access to our incisive coverage of local news, food and culture with no paywalls.
Make a one-time donation today for as little as $1.
Elle Carroll is a writer and photographer based in Denver. She has written for Westword since 2016.
Contact: Elle Carroll
Follow:
Twitter: @itsellecarroll
Instagram: @mosh_spice