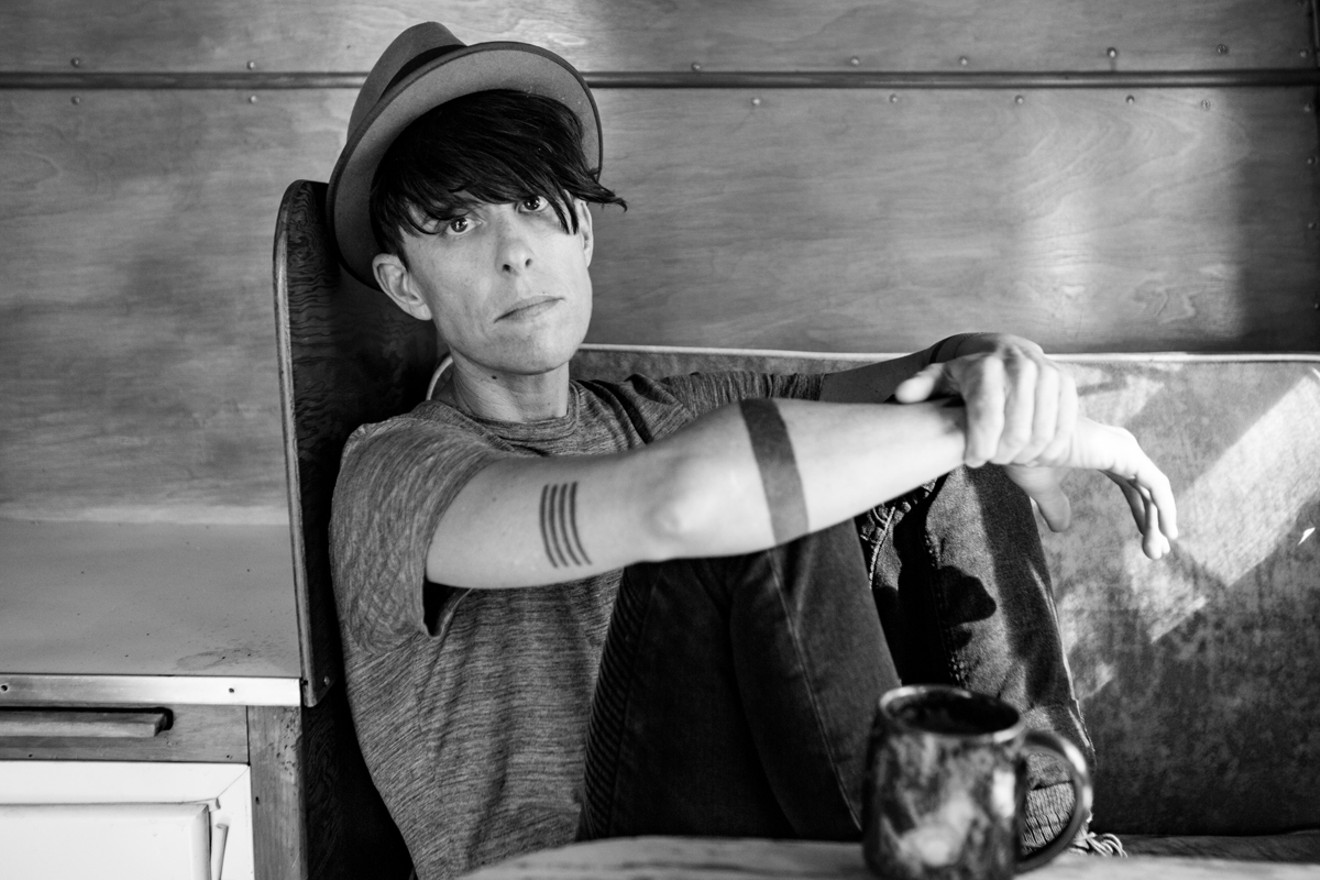 Andrea Gibson performs February 10 at the Boulder Theater. Coco Aramaki
Andrea Gibson was in the middle of writing a project about love when Donald Trump was elected. The poet shifted gears immediately.

“I wanted to put out a more political album,” Gibson explains. “Not that love isn’t political — you know, writing about women in my love poems. But I wanted to do something speaking more directly to social justice and more political themes.”

Last month, Gibson — who goes by the pronouns they/them/their — released that full-length album, Hey Galaxy, their first since 2013.

“It still has a lot of love on it,” they confess. “I’ll probably never do a project that doesn’t have love on it.”

Gibson has been performing poetry about gender identity, mental illness and relationships since 1999. Hey Galaxy contains old and new poems and stands out from the poet’s other work because all but three pieces are accompanied by music. In part, this is because of a preference for working with other people.

“I discovered that I preferred collaborating over being on stage alone or even doing a recording with just myself,” they explain. “I love making art with other people; it inspires me and sparks new themes and ideas in me.”

For Hey Galaxy, Gibson asked musicians to send in instrumentals they were willing to contribute to the album; more than 100 were submitted. Some music for the album also came from meeting Seattle composer Andrew Joslyn, with whom the poet spent hours writing in the studio.

“It was the most intentional process that I’d ever gone through,” Gibson recalls.

In addition to original music, Gibson also uses covers of songs like “Stand by Me” in performance, inspiring audience participation. The choices tend to be triumphant and hopeful.

“I have a tendency to charge through the poem, yelling the whole time,” Gibson explains. “One of the most helpful things about music for me is it slows me down. It gives me permission to take more time with the piece. … I have a couple of poems that I’m reading in the show that are ten years old. I’ve read them so many times that to combine the poem with a song that I love or a brand-new musical track will help me get more present in it and keep it fresh for me.”

But sometimes, Gibson wants to retain the elements of poetry and forgo musical accompaniment, as in pieces like “To the Men Catcalling My Girlfriend as I’m Walking Beside Her” and “A Letter to White Queers, A Letter to Myself.” This allows for direct, clear communication — and catharsis, with certain lines shouted.
“For the poem [“To the Men Catcalling My Girlfriend…”], I just wanted to yell the whole way through,” Gibson laughs. “I didn’t want there to be anything pretty about it. [I wrote that poem] because I kept encountering that situation in the world. I wrote it so I could have something to say back in the actual situation on the street instead of just yelling a curse word at somebody.”

Gibson notes that after years of performance, they approach a blank page or the microphone with less certainty than ever.

“When I was younger, I was invested in knowing a lot,” they remember. “I feel like I know less as time goes on, and I’m more interested in putting some wonder and curiosity and questions out there.”

For example, “About the Weather,” from Hey Galaxy, is Gibson’s twist on run-of-the-mill responses to a tedious universal conversation topic: the weather. The piece, paired with bright, whimsical music, ends with a question: “Have you forgiven her yet?”

“I think my writing at this point comes with fewer answers and more questions and trying to leave people investigating their own lives and the world around them,” Gibson says. “I don’t feel like I have answers. The world is such a wild place right now, and I feel like we’re living in such a critical, crucial time.”

Part of the reason that Gibson values collaboration is that other artists often add something surprising to a poem.

“I just love putting some faith in other people and seeing what they’ll make,” Gibson says. “Even working with videographers, I’ll have an idea of how I think something should go. But just letting people flourish in their art form and bringing things together, I’m in a constant state of being impressed by people and awed by people, watching people do what they’re great at and then what it can bring out of the poem.”

This past summer at the Vail Dance Festival, New York City Ballet principal dancer Lauren Lovette took certain lines from a number of Gibson’s poems, combined them and choreographed a ten-minute piece based on the words. Initially, Gibson thought the dance wouldn’t make sense, but then realized as the collaboration came to fruition that Lovette’s creativity added another layer to the works.

“You know, you think a poem is complete, but then watching someone dance to it. … Now I’ll read the poem and be missing the dance aspect,” Gibson says. “I feel like the poem is only half there now that it is missing people dancing.”

When asked whether performing is scary, Gibson laughs and says, “That is absolutely correct,” then elaborates: “It’s sort of wild, because I’m not a natural performer. I’ve never considered myself a natural performer. I have so many friends who are just very under the stage light, and you watch them and think, ‘God, this is where they’re meant to be.’ When I’m writing, I always feel like that’s where I feel I’m most meant to be. … The stage is really unnatural for me, mostly because of stage fright. I’m a homebody and sort of hermit-y. I’m shy. I get panic attacks just talking to somebody in the grocery store.”

Although the stage fright hasn’t gone away, Gibson heard something once that shaped their approach to the stage: “The amount of nerves you get for something is equivalent to the amount of respect you have for it.” Now, the poet says, “I think about it that way: I have a lot of respect for this art form, and I care about the things I’m talking about.”

Gibson’s love for the art form and the distinct sense of peace that follows a performance has kept them going.
“My therapist, who I constantly quote, says, ‘Fear is not necessarily a no,’” Gibson says. “I think that each time I get on stage. Also in the midst of that fear and anxiety, I think it’s something that is really prevalent in our culture to be stressed and anxious. I know I’m not the only one in the room who is anxious. There are people that struggle to leave their house that day to come to the show or people that came alone or people that struggle in crowds and are in the room anyway. It also can be connecting, especially when I’m not trying to hide.”