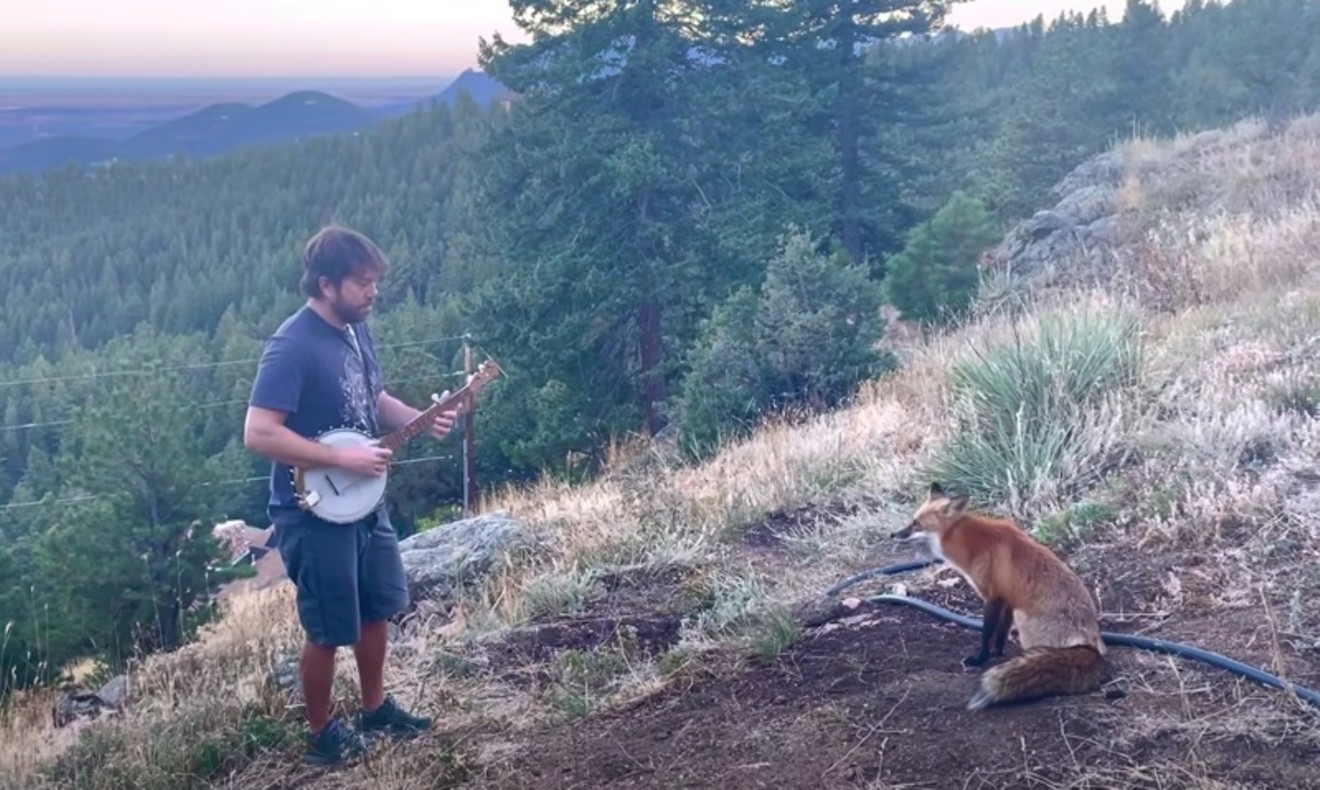 In a viral video, Andy Thorn plays for Foxy the fox at sunset. Youtube
Andy Thorn is best known as the banjo player for bluegrass band Leftover Salmon, which was inducted into Colorado Music Hall of Fame last year. But in recent months, Thorn has gone viral as a solo act, after YouTube videos of him playing tunes for a friendly fox were shared millions of times across social media outlets.

Thorn had been serenading the fox for a while before he posted the first video to his ThornHub YouTube page in November 2020. But then a recording made last November really took off, and has now been played over 3.6 million times.
Thorn and his wife moved into their Boulder Heights home seven years ago. "We always saw a lot of wildlife around, like turkeys, deer, foxes, bobcats and mountain lions, so there's always been a lot of that," he says. "But during the pandemic, when our shows were all canceled, we were home every day, and I started recording videos out on the deck. We noticed the fox would stop by and listen a little bit."

Thorn dubbed the animal Foxy, and says he can tell that the same animal is a regular listener because of his markings and personality. "We see three foxes regularly, so we think they're related. We see the mom with the flattened paw, and she limps pretty badly. We've heard she's been up here for around ten years. And then there's a sister — and this is just all what we think, we're not animal experts," he says with a laugh. "Foxy's personality is just really chill."

Foxy certainly seems chill: In one video, the little fox sits himself on a rock just a few feet away to enjoy the tunes as Thorn plays a guitar.

Making the videos was something that Thorn and his wife did to "enjoy ourselves while passing the time in the pandemic being home," he says, "and he was the only friend we were allowed to hang out with — that was kind of our joke." He used that line for a song on his album Fox Songs and Other Tales During the Pandemic, which was inspired by Foxy and released last March, a year into the pandemic.

"My wife and I had written many songs and stories throughout that year, while we were hanging out with the fox, growing a baby and enjoying the time off the road that we don't usually get," Thorn recalls. "So all those themes are in the album. ... There are a lot of songs about staying home and having a baby, stuff like that. And it was just a great way to pass the time. I played all the instruments myself, and she sang little harmonies."

The Foxy-inspired music didn't stop with the album, however. In mid-March, after receiving numerous requests from fans old and new, Thorn says he's going to start recording the instrumental music that he plays at sunrise and to Foxy. The instrumental album will include the song he plays in the viral video.

"It's not recorded anywhere," he says of the tune, which he wrote on the spot. "You'd be blown away by how many people have hit me up asking, 'What is this song called? I need to be able to listen to this.' But I just made it up that day, and it's not recorded. It's just a minute-and-a-half song, so I'm going to turn it into a full song and record a bunch of the other ones."

Although he'd been playing music to the fox almost since the start of the pandemic, he didn't record a video until right around the November 2020 election. And it was another year before one particular video "just exploded," he says. "I put it up, and it didn't seem that different from the others to me. But I think it was the combination of the sunset that day and the way Foxy sort of listened, and that tune I just made up on the spot. It all just came together perfectly, and people noticed finally — or a lot of people noticed."

Thorn received messages from friends that the video was on the front page of Reddit. And then Kelly Clarkson took notice and interviewed Thorn on her talk show.

"I'm just happy to be getting any new fans, even if it's not just because of my music," Thorn says. "Hopefully, it's partly because of the song I play, and I think that's part of the reason I went viral, too. ... I have this big following now that I didn't have before. It's been a great interest for Leftover Salmon, too, because we've been around forever, and sometimes it's like, 'Oh, we've already written about them.' So we've been mentioned in tons of stuff, and now Kelly Clarkson knows who Leftover Salmon is."

Clarkson's reaction to the band's name was similar to that of many others when they first hear it. "Did you say your band's name is Leftover Salmon?" she asked Thorn. "That's an amazing band name. You said that so flippantly, and I'm like, 'No, we're gonna talk about it.'"
Leftover Salmon is now talking about a big summer tour, as well as working on a new album that Thorn expects will be released in 2023. But Foxy hasn't just helped people discover the band; the fox increased interest in the banjo, too.

"One of the coolest things is how many people are telling me they were not a banjo fan before that video," Thorn says. "And so many people have been like, 'I bought a banjo because of this video, and I'm learning to play it now.'"

Just don't expect any Skype lessons from Thorn. "I have a baby, and that's all I do now," he says. That, and co-writing a children's book with his wife based on Foxy, which they hope to publish.

And there could be sequels ahead, since Thorn still sees Foxy and occasionally plays for him.

"It's blowing my mind that people care this much about this," he says. "I think right now, most of the stuff on social media is negative. It's just a nice feel-good thing that's just simple. And it is beautiful, you know?"
KEEP WESTWORD FREE... Since we started Westword, it has been defined as the free, independent voice of Denver, and we'd like to keep it that way. With local media under siege, it's more important than ever for us to rally support behind funding our local journalism. You can help by participating in our "I Support" program, allowing us to keep offering readers access to our incisive coverage of local news, food and culture with no paywalls.
Make a one-time donation today for as little as $1.
Emily Ferguson is Westword's Culture Editor, covering Denver's flourishing arts and music scene. Before landing this position, she worked as an editor at local and national political publications and held some odd jobs suited to her odd personality, including selling grilled cheese sandwiches at music festivals and performing with fire. Emily also writes on the arts for the Wall Street Journal and is an oil painter in her free time.
Contact: Emily Ferguson