"It was the classic 'get wasted at a show and think how great it would be to start your own band,'" says Herlihy with a laugh.

Now 37, Herlihy says he played guitar in college but never imagined performing in real venues. "I didn’t realize I could make the jump from just someone who plays the guitar in your bedroom to someone who could play live. The line was blurred between fan of music and someone who played music."

Songwriter Colin Kelly, 33, had a different experience: "I went to college for music and wanted to do this always, as far back as I can remember."

Despite those differences, by the time the two friends launched the band, they knew they wanted to try to turn Augustus into a full-time gig. "For us, we’re not sixteen," says Herlihy. "If I was still in high school living at my parents' house, there would be less responsibility to do well."

But starting the band wasn't seamless, and producing their first album proved harder than either co-founder had anticipated. "It was one of those situations where if we [had known] what we were doing, we wouldn’t have done it," says Herlihy, who found the process surprisingly exhausting for something he'd viewed as part of his dream career.

They recorded the five-song album, Idle, in a shed belonging to a studio engineer they knew. They stayed in his Victorian house in Leadville and spent days laying down tracks. 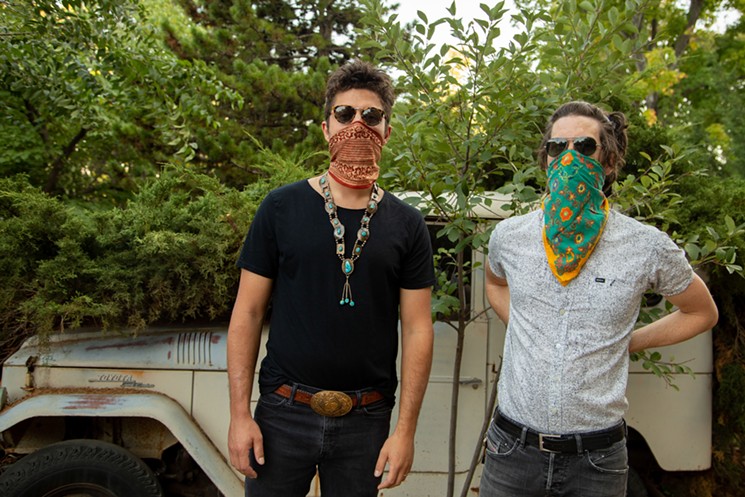 Colin Kelly and Jim Herlihy
Mariel McCown
"It was a total mess, and we were totally unprepared to release," Herlihy recalls.

The experience left the bandmates feeling like their professional ambitions were borderline delusional, but while producing that first album, they learned a lot about how they wanted to make the next one.

Seven years in, Herlihy, who teaches guitar for a living, and Kelly, who works at Audrey Jane's Pizza Garage,  still form the nucleus of the band, while other musicians have come and gone over the years. On their upcoming record, Color TV and Tall Tales, they're joined by bassist Rob Stragnell; drummer Ryan Healy; Yawpers frontman Nate Cook on vocals, guitar and pennywhistle; keyboardist, mandolinist and singer Tyler Imbrogno and violinist Josh Lee, both of Eldren; and Dragondeer's Eric Halborg on harmonica.

Color TV and Tall Tales includes eleven songs of mostly electronic-flavored rock and roll spiced with the occasional pennywhistle. The bandmates wrote most of the songs before starting the recording process, and finished the rest in the studio with Cook, who co-produced the album.

"A lot of the lyrics in some of these songs are inspired by being away. Tour was always rad," Herlihy says. "While we’re not always playing to large crowds, we’re going to cool places: 'We’re gonna camp here and play a show and sleep in our tents.'"

Other songs revolve around their marriages. "We have these relationships...that are amazing and then not amazing," Kelly says, noting that some of the songs are about "the struggles of wanting to be a good partner."

Take the song "Without Love," which opens with the sounds of a plastic lighter being run up and down the strings of a piano. "It’s about two people that may be trying to make it work and have the best intentions to do so, but for some reason they just can’t quite get it together," Herlihy says. "Maybe they do the leaving thing and see if time brings it back around."

Although he and Kelly look forward to the album's release, neither knows what's next — especially with the pandemic shutting down so many venues where they wanted to perform. (As a bonus for anyone who purchases the album on vinyl, the band will make every effort to deliver it by skateboard.)

Herlihy isn't expecting the album to make a huge splash, but he says he'll be happy if it touches even one person. Both he and Kelly hope it will help listeners become more grounded in their lives and experience the little moments rather than rush through them, as people often do.

"If I'm not present," asks Kelly, "then what am I doing with my life?"

Color TV and Tall Tales drops October 9 on Spotify.
KEEP WESTWORD FREE... Since we started Westword, it has been defined as the free, independent voice of Denver, and we'd like to keep it that way. With local media under siege, it's more important than ever for us to rally support behind funding our local journalism. You can help by participating in our "I Support" program, allowing us to keep offering readers access to our incisive coverage of local news, food and culture with no paywalls.
Make a one-time donation today for as little as $1.