Thirteen of the Best Denver Venues You Need to Know

Levitt Pavilion officially canceled its 2020 season last month. Photo by Jake Cox
Denver venues are starting to exit one of the bumpiest rides in modern music history: the pandemic. Most have already reopened or are about to in some form or the other. And as they do, it's time to head out and support them. Here's a starter list of thirteen of the best venues, culled from this year's Best of Denver edition. While there are plenty of straightforward clubs, this year's picks includes a barbershop, an old militia armory, a basement and a bookstore. So what are you waiting for? Go find your next show!

Best Free Entertainment
Levitt Pavilion Denver
1380 West Florida Avenue
For skeptics, the term "free concert" might conjure up the image of a snoozy evening of nearly unbearable music...but, hey, at least it's outside. But when those naysayers finally get themselves to Denver's Ruby Hill Park to check out one of the fifty free shows offered every summer at the nonprofit Levitt Pavilion, they'll realize they had it all wrong. A Levitt show offers full production: high-quality sound, lighting design and massive projections to bring the audience up close to the action. In addition, the artists showcased by the venue are a who's who of up-and-coming local and touring bands. Chances are they'll soon be among your favorites.

Best Blues Club
The Rusty Bucket
3355 South Wadsworth Boulevard
While the Rusty Bucket is known as a haven for Pittsburgh Steelers fans and heaven for burger lovers, the Lakewood neighborhood joint also hosts some of the area's finest blues talent on Saturdays, whether it be Randall Dubis, Boa & the Constrictors, BlueKrewe, Eddie Turner or the Delta Sonics. Over the past year, the Rusty Bucket has had to hold off on its long-running Wednesday night blues jams because of COVID-19 restrictions, but there are plans to bring those back, too, once those limitations are lifted.

Kaitlyn Williams performing at the Armory Denver in January.
Tony Mason
Best Livestream Production
The Armory Denver
2565 Curtis Street
The Armory Denver is a creative production facility in a massive building that dates back to the late 1800s. Back then, it housed weapons for the Colorado State Militia; it later became home of the Olympic Auditorium and Art Neon. But this latest incarnation may be its best. In addition to having recording studios and rehearsal rooms, the Denver Armory boasts a stage with lighting rigs, projection mapping, multiple high-end cameras and engineers who have worked in some of the city's biggest venues. As a result, it's a no-brainer match for bands looking for an ideal spot to produce high-quality livestreams and get creative with the filming.

Best Jazz Club
Dazzle
1512 Curtis Street
For more than two decades, Dazzle has been Denver's prime spot for jazz, bringing in nationally recognized musicians and the area's best players, whether they're up-and-comers or jazz veterans. While restaurants and venues struggled all over the state last year, the folks at Dazzle knew that out-of-work musicians were struggling as well, so the venue stepped up to help through its Bread & Jam program, a pop-up food pantry for professional musicians who have been out of work. The club also offered virtual programming and mental health support through a partnership with Music Minds Matter. That's music to our ears!

Best Hip-Hop Club
Barbershop Uncut: Onyx Salon & Barbershop
Great hip-hop clubs have come and gone in Denver. These days, one of the best places for an artist to be seen is Onyx Barbershop, home of the Barbershop Uncut YouTube series. Armando Trevino, the shop's owner, never intended to be a player in the music industry, but when he realized that Denver has a massive underground hip-hop scene that isn't getting the national attention it deserves, he took action and launched a video series based at Onyx, hosting rap battles and cyphers to give young artists a chance. Barbershop Uncut has put out videos with Old Man Saxon, TheyCallHimAP, Jakob Campbell and dozens of others, and in-person events should return soon. 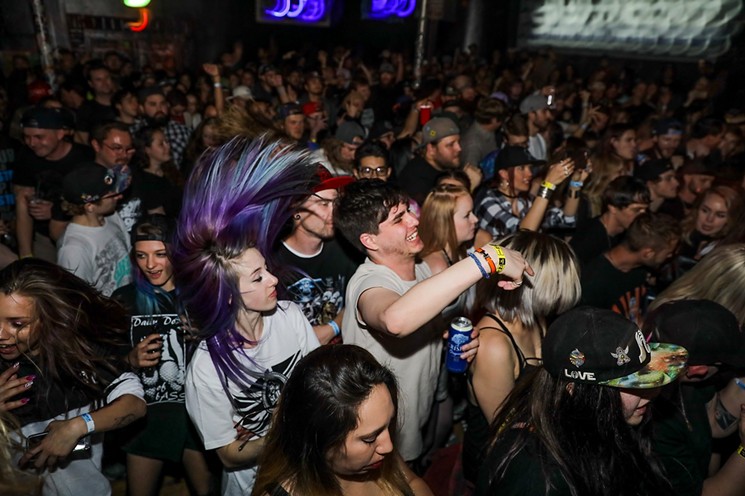 The Black Box pre-COVID.
Aaron Thackeray
Best Dance Club
The Black Box
314 East 13th Avenue
Denver is often touted as the bass-music capital of the world, thanks to the city's longstanding underground dance-music scene, raging warehouse parties and sweaty, head-banging fans. While some of that underground energy has floated into massive venues run by mainstream promoters, the spirit of the rave scene pulses on at the Black Box, a club owned and run by longtime Sub.mission promoter Nicole Cacciavillano, who set up the space to make sure Colorado's scene would have a welcoming home with a killer Basscouch Sound combo and a community vibe. While the venue itself just opened in 2016, its roots run deep...bass deep.

Best Rock Club
Larimer Lounge
2721 Larimer Street
When the Larimer Lounge opened nearly two decades ago, there wasn't much else happening as far as nightlife goes in this part of Denver. But the old warehouses were already full of artists who inspired the start of the RiNo Arts District, and music wasn't overlooked as one of the area's artistic amenities. Since Larimer Lounge's start, acts ranging from Arcade Fire to Jason Isbell have gone on to headline Red Rocks, and the venue's garnered a reputation as one of the city's best places to catch a favorite band or discover new music. Over the past year, the Larimer Lounge has been remodeled, and while EDM and jam acts also grace the stage, much of the music is still rock solid.

Best LGBTQ Bar
Blush & Blu Denver
1526 East Colfax Avenue
Lesbian bars are an endangered breed in the United States: According to the documentarians behind the Lesbian Bar Project, there are only around fifteen left nationwide. Denver's lucky to have one of them: Blush & Blu, a neighborhood bar, coffee shop and restaurant catering to lesbians but welcoming people of all identities. This East Colfax staple slings killer drinks, hosts a tasty brunch and offers a mix of open-mic nights, karaoke, bingo and various themed parties. If you're looking for a casual, queer old time at a bar that shows up for the community as much as the community shows up for it, this is the spot for you.

The Grizzly Rose in better times.
Brandon Marshall
Best Country Venue
Grizzly Rose
5450 North Valley Highway
Country fans continue to go wild at the Grizzly Rose, which has been the Denver area's dominant country bar for more than three decades. Set in a massive 40,000-square-foot building, the venue has plenty of room for dancing, dining and drinking — and even mechanical bull riding. On any given night, you might catch the best local country bands and rising national acts; some of those who showed up at the Grizzly Rose before they blew up include Garth Brooks, Taylor Swift, Kenny Chesney and Blake Shelton. Look for more national acts in the coming months — Josh Ward, Randall King and Aaron Watson are all booked — while local acts usually play multi-night runs.

Best All-Ages Venue
Mutiny Information Cafe
2 South Broadway
If there's any guarantee that Denver's underground arts and music scene can survive the onslaught of development, you'll find it at Mutiny Information Cafe, a Broadway staple that serves as a bookstore, comic shop, coffee shop, podcast hub and music venue. With a long legacy in Denver's punk scene, Mutiny's owners keep the DIY spirit alive, offering up a stage to bands and artists who would have zero chance of playing any of the city's commercial venues. And because the spot also hosts all-ages acts, younger generations have a place where they can discover underground culture, too, and keep the tradition going.

Best DIY Venue
Seventh Circle Music Collective
2935 West 7th Avenue
The folks behind Seventh Circle Music Collective have long fostered Denver's DIY scene in their west Denver garage, record store, practice room and multi-use art space. Since every show is all-ages, Seventh Circle is an ideal spot for younger fans to hear music, and younger musicians to find a stage to play. Although the small venue hasn't been booking live shows during the pandemic, it's been hosting livestreams while it bides its time before getting back to business.

The Salt Lick Denver collective includes, from left, Maya Bennett, John Baldwin, Chris Voss, Jason Edelstein and Andrea Hoang.
Mallory Redmon
Best New DIY Venue
The Pond/Salt Lick Denver Music Collective
During the pandemic, the Salt Lick Denver Music Collective opened a new venue called The Pond in the basement of a house in Denver. The group has been broadcasting concerts from there called Songs From the Pond, by indie-rock bands and other local acts. Eventually, Salt Lick plans to open the space — which is painted with a mural of a glow-in-the-dark frog, beans and squash, and decorated with a mannequin and other ephemera — for tiny in-person shows, and to host larger outdoor shows behind the venue.

Best New Club
HQ
60 South Broadway
Not long after 3 Kings Tavern, a legendary rock club, closed after fourteen years on Broadway, Scott Happel and Peter Ore, two of the owners of the Oriental Theater, took over the space and turned it into HQ. While the club will gradually ramp up its live-music offerings, including punk acts like Reno Divorce and Agent Orange, in the coming months, HQ has already been hosting regular karaoke, burlesque and goth nights.

What are your favorite venues in town? Let us know at [email protected]
KEEP WESTWORD FREE... Since we started Westword, it has been defined as the free, independent voice of Denver, and we'd like to keep it that way. With local media under siege, it's more important than ever for us to rally support behind funding our local journalism. You can help by participating in our "I Support" program, allowing us to keep offering readers access to our incisive coverage of local news, food and culture with no paywalls.
Make a one-time donation today for as little as $1.