Baked N' Denver has a large variety of donut classics. Baked N' Denver/Instagram
Doughnuts aren't the kind of treat that most people eat every day, but when the craving hits, it must be satisfied. Not all doughnuts are created equal, however. While there's nothing wrong with a standard glazed (why do you think Krispy Kreme remains so popular?), Denver offers plenty of options when you want to step up your doughnut game.

From croissant-like layered takes and sourdough doughnuts to a chewy mochi variety, these six spots are your best bets in town for diving straight into the sweet doughnut hole of happiness. This Illinois-born brand (and our 2022 pick for Best Doughnuts) debuted in Denver last year, just days after the birth of operators Sean and Kailyn Harshbarger's son. While influenced by Dominique Ansel's laminated doughnut approach, Parlor's take is larger, and the toppings are far less precious. Instead of a simple, precise ring, icing spills off the sides, and add-ons like sprinkles, strawberries and cookie crumbles are strewn on top. Flavors include blueberry, raspberry pistachio, French toast, churro and turtle cheesecake. While crispy and flaky on the outside, the inside of the doughnut is airy and buttery. A second grab-and-go location is also now open at 5001 South Parker Road in Aurora. 3920 Tennyson Street
303-477-7000
berkeleydonuts.com
This bakery inside of Hops & Pie serves up potato-style and sourdough doughnuts every Wednesday through Sunday from 7:30 a.m. until they're sold out — and if you don't want to chance that, you can pre-order and schedule a pick-up time online. Favorites include the honey-glazed sourdough and sea salt caramel with black Hawaiian sea salt on a chocolate cake doughnut. Vegan and gluten-free varieties are also available. 2449 Larimer Street
720-484-4359
dochicompany.com
Dochi opened last May, making it the sixth location from the company that started in Orlando in 2018. The doughnuts, which come in flavors like Oreo matcha and "Ube Bae," are made with rice flour, which results in a light, airy texture. They look a bit different than typical doughnuts, too — more flower-like, with sections that are easy to pull apart and share (though you can totally keep them all for yourself). 1553 Platte Street
720-428-8565
habitdoughnuts.com
There are two schools of thought when it comes to eating doughnuts: You can either go with light, airy doughnuts best straight from the fryer, or with richer, brioche-style doughnuts that eat more like a French pastry. Habit specializes in the latter, creating fanciful flavor combos atop sweet, toothsome rounds. The house special is the Blazed, a regular glazed doughnut torched on top to caramelize the sugar. Each day brings different specials, from the Real Mint Shady to the Blue Barry White. Kick up your selection with a boozy injection or a shmear of hemp butter. What could be better? 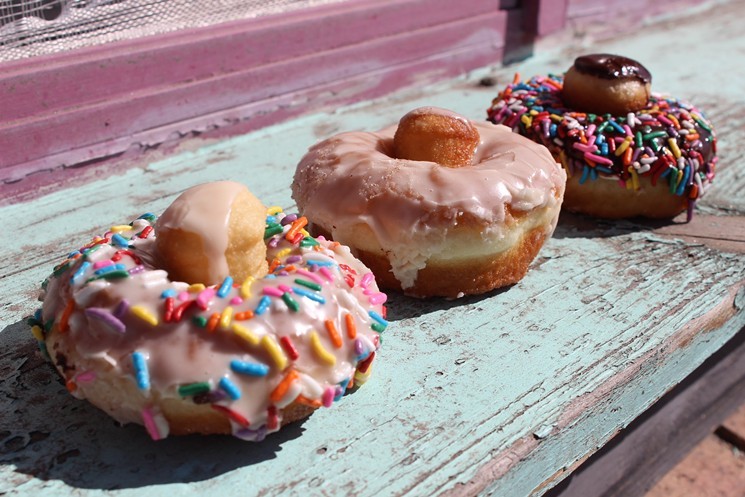 We're over the pandemic, but bring on the Pandemic Donuts.
Tori Buehner

2962 Welton Street
248-672-5506
pandemicdonuts.com
Maybe naming your doughnut business after a worldwide disease is a little irreverent, but Pandemic Donuts was born of the difficult times created by COVID-19 and the ensuing restaurant restrictions. Gabrielle Henning and Michael Milton were laid off from their restaurant-industry jobs when the pandemic hit in March 2020, and turned to doughnuts cooked up in their cottage-industry kitchen to make ends meet. The doughnuts, so light and airy that you can eat several, were so good that the two couldn't keep up with demand. Now they have their own brick-and-mortar bakery inside Queen City Collective Coffee in Five Points, and the doughnuts are flying out the door. You can also find the sweet treats every Saturday throughout the summer at the City Park Farmers Market and South Pearl Street Farmers Market on Sundays. 1301 South Broadway
303-777-9361
bakedndenver.com
Veteran doughnut baker Juan Lopez bought a Winchell's franchise in 2019 with the understanding that he'd be converting it into an independent bakery the next year. In July 2020, he officially launched the business as Wake & Bake (and later changed the name to Baked N' Denver) with his own recipes, turning out a variety of classic, workingman's doughnuts morning, noon and night along with breakfast sandwiches, kolaches and coffee drinks. You'll find a few nods to modern trends (some Oreo crumbles here, some bacon there), but old favorites like the buttermilk bars, raised maple doughnuts and cinnamon crumb cake doughnuts are so good, they taste like a revelation.
KEEP WESTWORD FREE... Since we started Westword, it has been defined as the free, independent voice of Denver, and we'd like to keep it that way. With local media under siege, it's more important than ever for us to rally support behind funding our local journalism. You can help by participating in our "I Support" program, allowing us to keep offering readers access to our incisive coverage of local news, food and culture with no paywalls.
Make a one-time donation today for as little as $1.