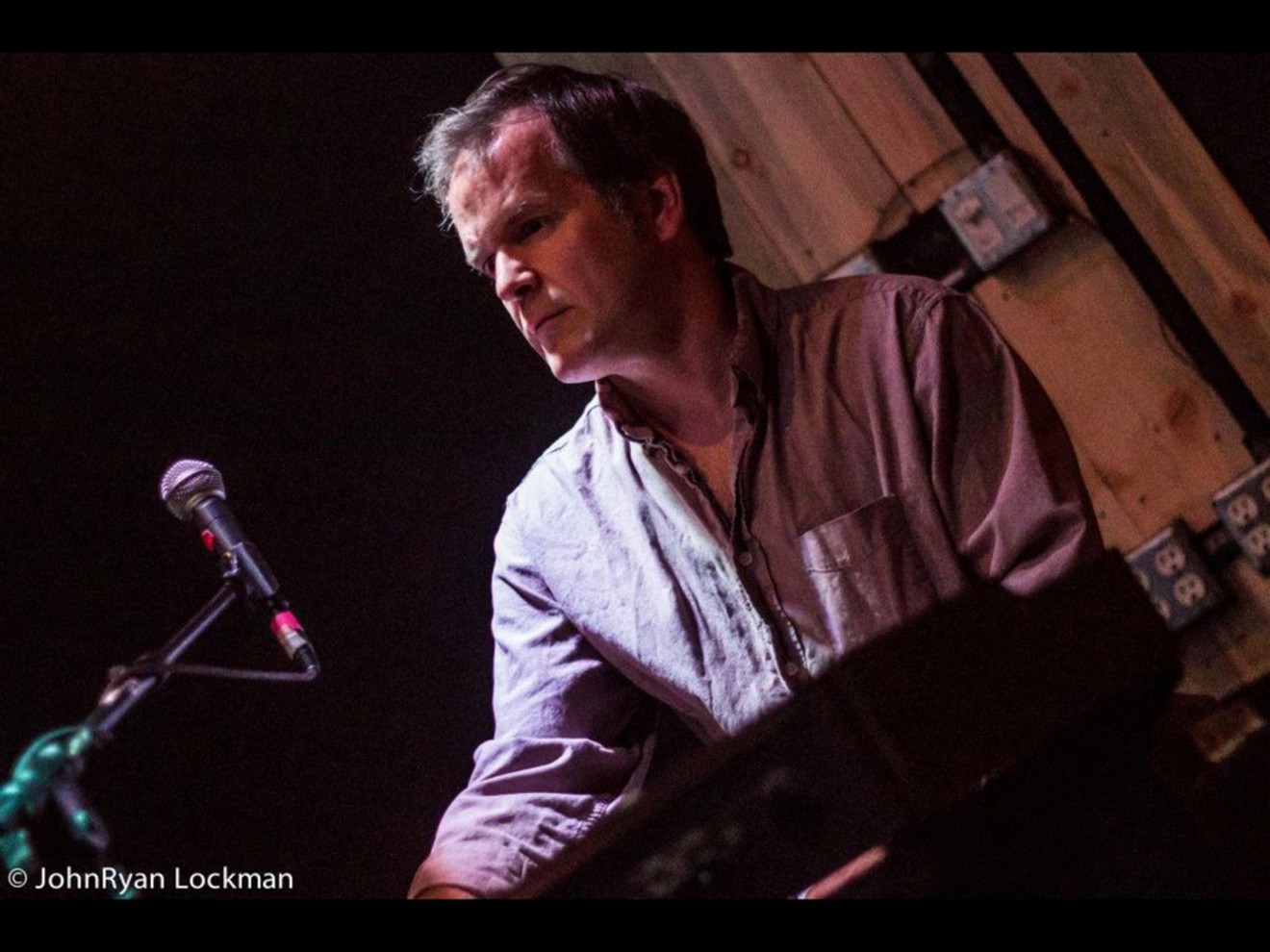 Bill McKay quit Leftover Salmon for a freelance career closer to home. JohnRyan Lockman
Bill McKay likes to stay busy. The former choir singer and Colorado College graduate spent his formative years gigging nonstop with the blues-based Derek Trucks Band and then Colorado’s own Leftover Salmon. A glance at his current schedule reveals that he hasn’t slowed his pace much. Now 48, McKay remains musically agile, and while most of his performing occurs closer to his home in Westminster, he still finds himself playing several times a week, with only an occasional, if more disciplined, return to a tour bus.

“After graduating from college [in 1991], I almost immediately went on the road with the group Band du Jour out of Boulder. After a few years with them, I was referred to the Derek Trucks Band by the late Colonel Bruce Hampton,” he says. “As part of Band du Jour, I’d crossed paths with Colonel Bruce’s group the Aquarium Rescue Unit, who were out touring at the time, and so I’d gotten to know the Colonel as well as [ARU] guitarist Jimmy Herring, who also referred me. I got a call from Trucks’s manager one day and drove down to Texas, where they were playing, and jumped on board.”

Having tuned up his skills with Trucks and company for five years, during which time he lived in Atlanta, McKay next received a call from Leftover Salmon. The fun-loving festival band wanted him to sing and play keys for them, and he took the opportunity to move back to Colorado. After logging more than a decade with Salmon, with whom he wrote and performed a few of his own well-appreciated compositions, life in the high-spirited touring scene took its toll.

“I started drinking way too much, and I had a young kid at the time. It just kind of wore me down. I came close to self-destructing,” McKay, who is now a single father of two, says. “In the end, I quit drinking partially because of leaving the group. It’s a party band, and there was a lot of traveling. I guess it just ran its course in my life. I had a great time, but it put a strain on me.”

After leaving the band in 2011, McKay refocused and sought musical outlets in and around Denver. Working as a freelance keyboardist and songwriter, he found quite a few takers. In addition to playing regular solo piano gigs and fronting his own self-named electric group (the Bill McKay Band), he fields a duo with his older brother John, who sings and plays guitar. McKay also plays regularly with several local projects including the True Blue Band, the Other Brothers (an Allman Brothers tribute band), Brothers Keeper and the bluegrass- and Americana-influenced Coral Creek, which will soon release a new CD produced by Tim Carbone of Railroad Earth renown.
“I’m a freelance musician,” he says. “So just like any freelance career, you take what you can get. I try to be a little bit picky. I have two kids and I’m a dad, so I can’t run out the door to play whatever gig comes my way. I try to focus on stuff that’s a little more rewarding to me musically. But I’m also pretty wide open, because I enjoy the challenge of playing different kinds of music and learning new material. A good week for me consists of playing a couple solo piano gigs, doing some funk with the True Blue Band and maybe playing a little bluegrass. All kinds of stuff. That’s what I really enjoy now, instead of playing in one band where I’m playing the same music night after night.”

While a keyboard isn’t traditionally a bluegrass-related instrument, McKay has the ability to make his sound work in just about any setting. Having studied various styles of music, from African to Native American, he says he enjoys pushing genre boundaries.

“Traditional bluegrass frowns on keyboards and piano, and it frowns on drums,” he says. “Leftover Salmon is very responsible for creating the jam-grass sound by adding drums and keys. That also goes back a little to bands like New Grass Revival, which pushed the limits of bluegrass by including elements of rock and so on, but Salmon really took that idea and ran with it. Bluegrass purists do not like keyboardists, but I learned a lot working with [original Leftover Salmon banjo player] Mark Vann. I learned a lot about the banjo’s approach to the music, and I basically patterned my keyboard playing approach after the banjo.”

Anyone who has ever taken in one of his performances can attest to the raw and soulful power of McKay’s vocals and his force-of-nature keyboard playing. Blues, funk and soul come to mind as underlying contributors to his sound, though McKay says that his primary foundation is in jazz.

“I’m fundamentally a blues player, but I’m most influenced by jazz,” he says. “I’m not a straight-ahead jazz player, but I’m a huge Deadhead, and the Dead were a jazz-influenced jam band. One of my biggest musical influences is McCoy Tyner.” Jazz pianist Tyner is a former member of John Coltrane’s band.

“Even though I wouldn’t sit down and do a night of standards or anything like that,” McKay continues, “I take a jazz approach to bluegrass, blues, jazz, rock and funk, where you learn all the fundamentals and the basics and then learn to improvise and apply a creative notion to whatever it is you’re doing.”
McKay finds space to apply his affinity for jazz and the Dead when he stretches out with Grateful Dead cover bands such as Terrapin Flyer, with whom he recently played a three-night gig in Denver. As is fairly typical for him, the free-form group figured things out on the fly after hashing out a set lists via email. With Flyer, McKay filled in for the group’s usual keyboardist, former Jerry Garcia Band keyboardist Melvin Seals.

“I’d never done the Terrapin Flyer thing before. I got a call from my longtime friend and drummer Jake Wolf, who I sometimes play with in the Rocky Mountain Grateful Dead Revue. We exchanged song lists and just worked it out a little ahead of time,” he says. “It was nice to get back to that music, which was a formative part of my development. For a while in the ’90s, it wasn’t really cool to play their stuff. If you covered one Dead tune, you’d get pigeonholed. I didn’t touch it for about ten years, because it just wasn’t hip. But I’m thrilled to get back to it. The Grateful Dead songbook is so deep, and there are so many spaces for musicians to explore. It really opens up your ears as a player and as a listener.”

McKay says he doesn’t find time to write and perform his own material as much as he would like, though some of his creative output will make its way onto an upcoming CD by Coral Creek, which the band hopes to release early next year.

“I’ve always been a songwriter, though I’m not terribly prolific, as I’m usually constricted for time. I wrote a brand-new bluegrass tune for the new Coral Creek album,” he says. “I’ve actually got a few of my originals on this release. I try to write in line with whatever band I’m working for. I forced a bluegrass tune out, which is pretty cool.”

McKay says that having a solid base of influence helps him in whatever formation he happens to find himself in, and that he still enjoys simply playing solo piano shows where he taps into his penchant for boogie-woogie piano music.

“I’ve been through a lot of stylistic periods, and playing with Leftover Salmon all those years got me really well versed in that fast bluegrass style of music, but you get limited by playing in just one band. I think part of what happened to me is that I started to check out a little due to those limitations. I feel more free now. I feel like I’m playing better now than I have in my entire life. Being free from the ball and chain of alcohol helps, but also just the freedom of being able to fully express myself in a variety of outlets allows me tap into my full potential as a player.”

Correction October 12, 2017: The original title of this story stated that Bill McCay quit Leftover Salmon. McCay did not necessarily leave the band by choice. We regret the error.