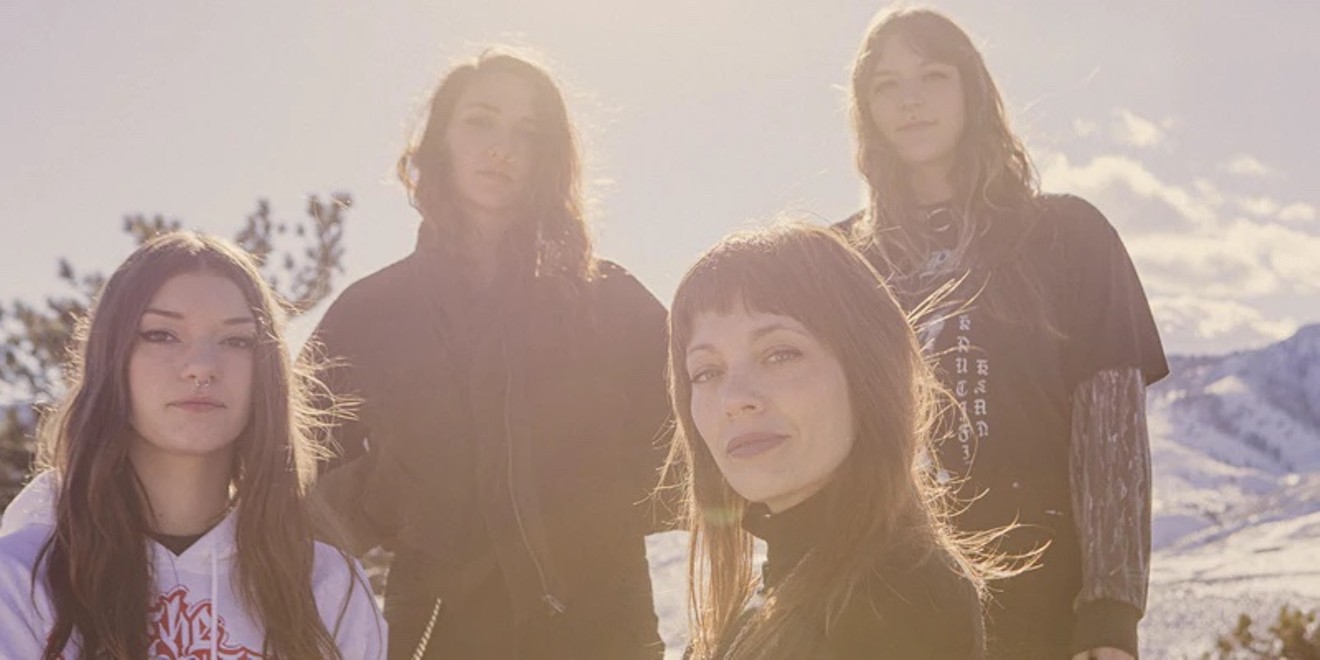 Take album opener “Delusional.” It starts innocent enough — folksy, even — but the acoustic guitar and violin give way to distortion and a keys lick that would make the Phantom of the Opera proud. Faris's syrupy singing soars throughout, while screams accentuate the decent into heavy tones. The band knows where the auditory edge is and how to mockingly dance across its precipice, taking its powerless passengers on a heart-pounding journey.

In Denver, you can take the ride yourself. Blackwater Holylight is currently out on its first U.S. headlining tour, which includes a stop at the hi-dive on Tuesday, June 7. Spirit Mother and Eagle Wing open.

“We always have a lot of merch for sale, so if you like collecting vinyl or shirts, bring a few extra dollars with you,” plugs Faris, who also handles bass duties.

The four women rockers — including Sarah McKenna (synthesizers), Mikayla Mayhew (guitar) and Eliese Dorsay (drums) are fans of peers such as Chelsea Wolfe, King Woman, and Divide and Dissolve. But there aren’t traceable influences of those acts in Blackwater Holylight’s sound; the band is carving its own rock ’n’ route.

“Our musical influences are really all over the place, honestly. We have a lot of bands that each of us enjoy, but we all listen to so much stuff that it’s just a huge random pot at this point,” Faris says. “When we were making this record, we didn’t have any specific music or artists that we were trying to emulate. We were more just jamming and keeping what we all thought went together. [We were] mostly influenced by the times and what we were going through personally. Our vision was to be honest and have pieces of everyone throughout the record and make songs we were all excited about, and that’s just what happened.”

She’s happy to be playing live shows again and returning to a more normal musical routine, though this record is the band's first without its founding guitarist, Laura Hopkins, who left in 2020.

“[The] last few years have been rough, like they have been for most citizens and artists of the world. But we’ve been starting to tour again more in the last six months, and that feels really good. We wrote Silence/Motion when lockdown first started, and it’s definitely very relevant to the times. It was great that we were still able to write and play music together, especially in the beginning of the pandemic, when everything felt so otherworldly. But we were going through a lot of changes as a group,” Faris says, adding that the tour has been “great” so far.

Faris admits the band’s shows “aren’t anything fancy, really. Just moody and loud most of the time.”

“People can expect raw and honest music,” she concludes.

Blackwater Holylight plays HQ, 60 South Broadway, at 7:30 p.m. Tuesday, June 7. Tickets are $15-$18.
KEEP WESTWORD FREE... Since we started Westword, it has been defined as the free, independent voice of Denver, and we'd like to keep it that way. With local media under siege, it's more important than ever for us to rally support behind funding our local journalism. You can help by participating in our "I Support" program, allowing us to keep offering readers access to our incisive coverage of local news, food and culture with no paywalls.
Make a one-time donation today for as little as $1.