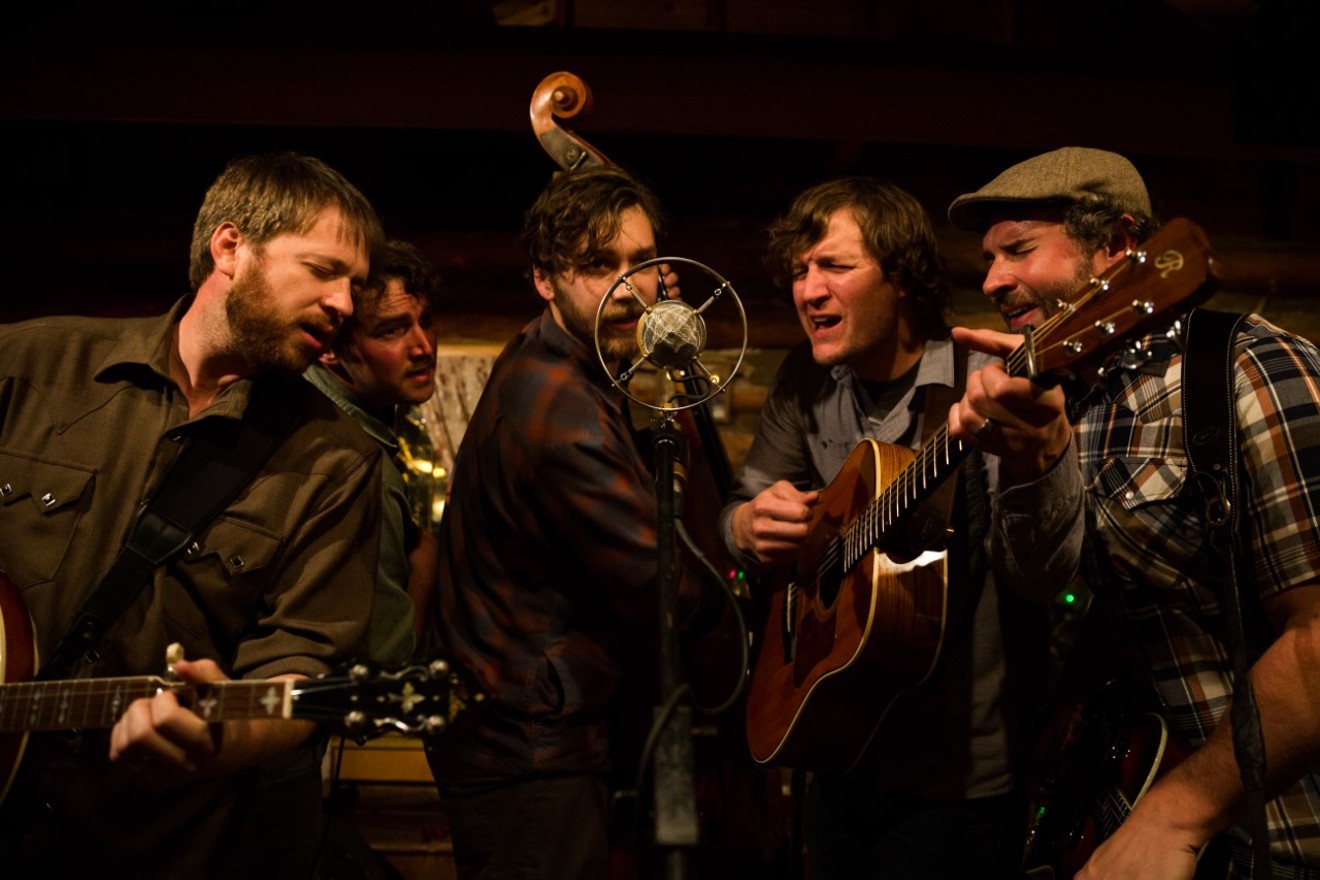 Wood Belly Photo courtesy of Wood Belly
The group Wood Belly earned the number-one spot in the band competition at the Telluride Bluegrass Festival this past summer. The rootsy acoustic ensemble was born when mandolin player Chris Weist met guitarist Craig Patterson and dobro player Chris Zink at RockyGrass in 2015. Within a year, they combined with banjoist Aaron McCloskey and bassist Taylor Shuck.

On its debut release, Solid Ground, which dropped this past May, the outfit stakes its claim among artists capable of transporting traditional instrumentation to a new place. The Front Range-based band will showcase its festival-approved talent and catchy songwriting at a performance at Ophelia's Electric Soapbox this Saturday night. Westword spoke to Wood Belly banjo player Aaron McCloskey to get the lowdown on the upcoming hoedown.

Westword: Hi, Aaron, nice to catch up with you. So how did it feel to win in Telluride this year?

Aaron McCloskey: Hey, thanks for the call. It was super-exciting. We didn't expect to win the thing going into it. We were gonna be happy if we just made the finals, but we did it. It worked out great.

Where were the finals held?

The finals were held on the main stage [in Town Park] at Telluride, so it was sort of overwhelming just to be up there. You look up and you see all the mountains, and it's just an all-time incredible experience.

What day of the festival did they hold the finals?

The preliminary round is held on Friday at the Elks Park Stage just outside the festival grounds, and then the finals are held on Saturday morning on the main stage at 10 or 10:30 a.m. Even though it's early, there are still a lot of people there, and the whole sound system is turned on, and it's also broadcast over KOTO. So even our family and friends who couldn't make it could listen to the broadcast from afar.

What are the ages of people in the band?

Our youngest is 28 and the oldest is 38. We're spread out across a decade. We're all on the same page, though. I'm 37. I'm the only person in the band who is currently a full-time musician. I gig a lot, and I also teach at Swallow Hill. I'm at the top of our age spectrum, I guess, but I certainly don't feel old.

Where do you all live?

I live in Berthoud, just north of Longmont. Another one of the guys lives in Denver. Two live in Fort Collins. And we've also got a member living in Loveland. So we're scattered around the Front Range. We're all transplants. I moved here from the East Coast.

Is there a particular town that you really enjoy playing on the Front Range?

I wouldn't say there is any place we like more than another, but we play Fort Collins a lot, and so it sort of feels like our home base. Denver can be a crapshoot in terms of pulling in audiences, though we've had some great shows there, for sure. In Fort Collins, we tend to consistently draw a good crowd.

We like playing places such as Hodi's Half Note and Avogadro's Number. We recently had about 160 people on the patio at Avo's. It was a crazy crowd, and it was awesome. This coming Friday, we're playing downtown Fort Collins, on the old town plaza. We've had some great ones in Denver, too, but not quite as consistently and not as many. Cervantes' is great. We debuted our new release there, and we've played their bluegrass series on Thursdays. We also like to play at Swallow Hill. It's been a while since we've been in Denver, but we're looking forward to getting back down there. We get around the state and play a lot of outdoor events during the warm months, so it seems like the Denver club shows are more of a fall and winter thing for us.

Have you been playing a lot?

We've been going super-hard since April. I'd say we've played about 65 shows so far this year. We're looking to do more in 2019. We're taking a quick break at the end of October, and then we're back to it. It's our first break in a long time.

How does your band approach songwriting?

We have two primary songwriters, but we all write, which is one of the coolest thing about the band. Everybody in the group has that little bit in their musicality. It's not just people who are playing, but people who are also thinking creatively around music, and people who like to write. Our guitar player, Craig Patterson, and our mandolin player, Chris Weist, are the main songwriters, but everyone writes. Sometimes the songs come in various stages and will arrive as a series of chords that we chop up and rearrange, or sometimes the songs come fully developed and we'll just make a tweak or two, but we pretty much always co-arrange and work the tunes up together.


Are you creating all original music?

We do some covers during longer gigs, but our album is all original, and we have a bunch of original songs. So we have our own material, and we try to put our unique stamp on our sound. Our co-writing/co-arranging process takes more time than just pulling out an original tune and playing it, so you end up putting your imprint on it because you're working on it so much and spending more time with it. I heard the term "grassicana" the other day, and I kinda feel like that's our realm. We're rooted in bluegrass and have that foundation, but our songs come out sounding a little like Americana or folk songs being played by a bluegrass band more than simply bluegrass songs. All of us have played other genres of music, so I think those influences lend themselves to a little more of a progressive vibe.

Can you tell me about the art on your CD Solid Ground?

My wife's friend Anna did the artwork. It's based on an actual watercolor painting with some ink lines drawn over it for the font.

Solid Ground CD cover.
Courtesy of Wood Belly
Is that the city of Denver depicted in the background on the CD cover?

It's kind of anywhere, but the theme of the album and the title track, "Solid Ground," is about getting out of the city and finding a piece of ground in a stable place that's not quite so crazy and overwhelming. We're all from the Denver area, so anybody from Colorado who sees that cover is certainly going to think of Denver.

Did you say that you teach music?

Yeah, I play banjo in Wood Belly, but I also teach guitar at Swallow Hill.

You guys seem to have fun with a few of your titles — such as the song "Colorado Hipster Beard."

Yeah, it's a very tongue-in-cheek song about moving here, growing a beard and smoking American Spirits. It's got a poppier-sounding chorus to it. It's maybe about trading your tight jeans for a cowboy hat and being a Colorado hipster instead of a New York hipster. It's a really fun song. I suppose that Colorado hipster beard could be the one on my face [laughs].

Yeah, this show at Ophelia's with Meadow Mountain should be a blast. We'll be supporting them for their new CD release. They're similar to us, and they have a lot of great momentum, as well. They recently won the RockyGrass band competition. So we're really looking forward to this. We also got nominated for a Momentum Award by the IBMA (International Bluegrass Music Association) this year. It was a big honor to be considered. And we're recording an EP this fall at eTown as part of our recent win in Telluride. We hope to release another full-length CD next year.

Wood Belly with Meadow Mountain, 8 p.m. Saturday,  November 3, Ophelia's Electric Soapbox, 1215 20th Street, $13 to 23.
KEEP WESTWORD FREE... Since we started Westword, it has been defined as the free, independent voice of Denver, and we'd like to keep it that way. With local media under siege, it's more important than ever for us to rally support behind funding our local journalism. You can help by participating in our "I Support" program, allowing us to keep offering readers access to our incisive coverage of local news, food and culture with no paywalls.
Make a one-time donation today for as little as $1.