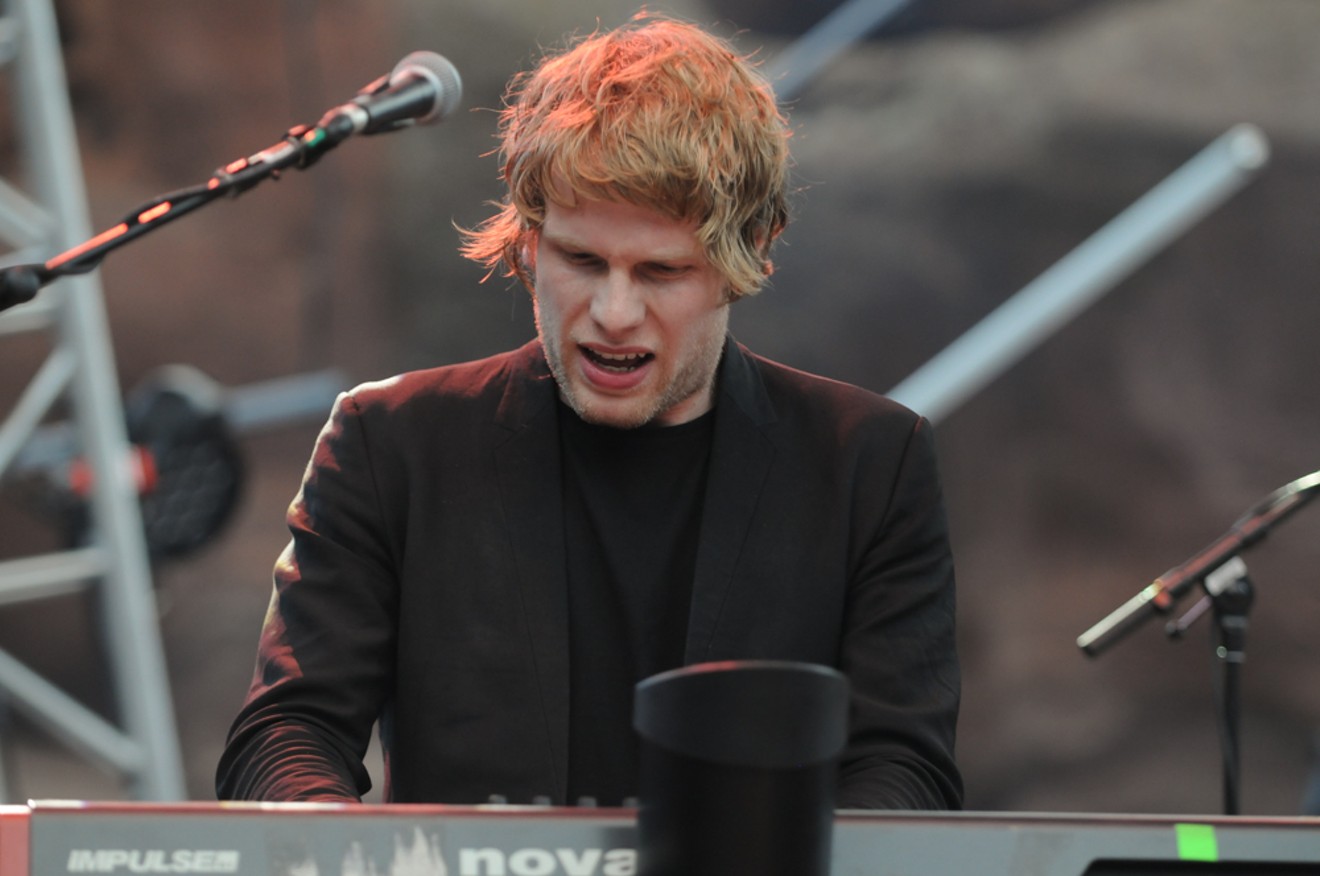 Jimmy Vallance, one half of the electronic duo Bob Moses. Miles Chrisinger
It was a long journey for Jimmy Vallance and Tom Howie, the electronic duo now known as Bob Moses, to start making music together. It was a journey that involved them crossing international borders, reuniting unexpectedly in a Lowe's parking lot, and eventually recording together in a renovated candle factory in Brooklyn.

Years earlier, the two musicians had attended the same high school in their home city of Vancouver, British Columbia. "We were both sort of the 'music guys' at our school," Vallance recalls of those days. But they didn't play together back then, adds Howie.

Vallance, who holds down keyboards for the duo, had been interested in different styles of electronic music growing up, citing ’90s crossover artists like Chemical Brothers and Moby. "I listened to anything from hard techno to trance.... Any DJ that came to Vancouver, I would try to see." Howie on the other hand, who plays guitar and sings in the group, went more the singer-songwriter route. After playing in different bands in high school, he eventually became frustrated with this musical outlet: "I felt like the people I was playing with were more players instead of collaborators.... I really wanted to find a collaborator, and I think Jimmy did, too."

That collaboration would come a few years later, when a desire to be a part of the music scene brought Vallance and Howie, each on their own path, to New York. This is where the fabled Lowe's parking-lot meeting would occur, the coincidence of which prompted the two to start writing together at Vallance's apartment. Their styles blended harmoniously; Howie describes their first sessions together as "creative fireworks."

After dubbing themselves "Bob Moses" after Robert Moses, the city planner responsible for New York landmarks like Shea Stadium, the two started churning out material and released three EPs from 2012 to 2014. From there, they started cutting their teeth performing at raves and club parties whenever they could: "We used to go to sleep and then wake up at five to drink and do drugs and go play at an after-party at eight," Vallance recounts with a laugh. A few months before the release of their third EP, First to Cry, they signed with Domino Records. After re-releasing the three EPs as a single record titled All in All, they started getting attention from the national electronic scene.

Their style is an interesting divergence from most electronic dance music, with energy coming from space rather than sound. Their songs are mainly driven by the low end, usually with a thumping bass or beat that eventually swells to a peak. This leaves space for Howie's vocals and guitar to shine through. "We felt like songs hadn't really been written in the genre the way that we wanted to hear," says Vallance.

Bob Moses opening up for M83 at Red Rocks Amphitheatre on May 31, 2016.
Miles Chrisinger
The duo forms songs organically, letting inspiration hit in whichever way it chooses: "Ideas can start in any form," says Howie, whether it be a beat, a chord progression, a bass line, or whatever else might make its way into a track. "We take an idea and start fleshing it out with whatever makes sense the most.... Both of us now have a pretty good idea of what we're shooting for."

Howie and Vallance certainly had a good idea of what they were shooting for when they composed their debut full-length album, 2015's Days Gone By, a sprawling hour of shimmering, pulsing soundscapes and tales of heartbreak. The album's lead single, "Tearing Me Up," would go on to garner the band's most significant success yet: It was nominated for a Grammy for Best Dance Recording, and RAC's remix of the track took home the 2017 Grammy for Best Remixed Recording. While the recognition is a nice bonus for its efforts, the duo remains largely unfazed by the unexpected success: "It doesn't change the way we think about our music," says Vallance. "The only thing that's really changed is the people around us."

The two Vancouver musicians opt to measure their success in other ways: Vallance cites selling out the Commodore in their home city of Vancouver as a particularly proud moment in Bob Moses history: "It's a really cool moment where you realize you can dream about something and then have it actually happen."

Next on the horizon for Bob Moses is a headlining set at this year's Westword Music Showcase. The duo is thrilled to return to Denver because, as Vallance puts it:, "Denver has very much understood dance music for a long time."

Be sure to catch Bob Moses at the Westword Music Showcase on Saturday, June 24, at the Mike's Hard Lemonade Stage. Buy tickets and get more info about Showcase here.