Review: Bob Weir Spread the Gospel of the Grateful Dead at Red Rocks 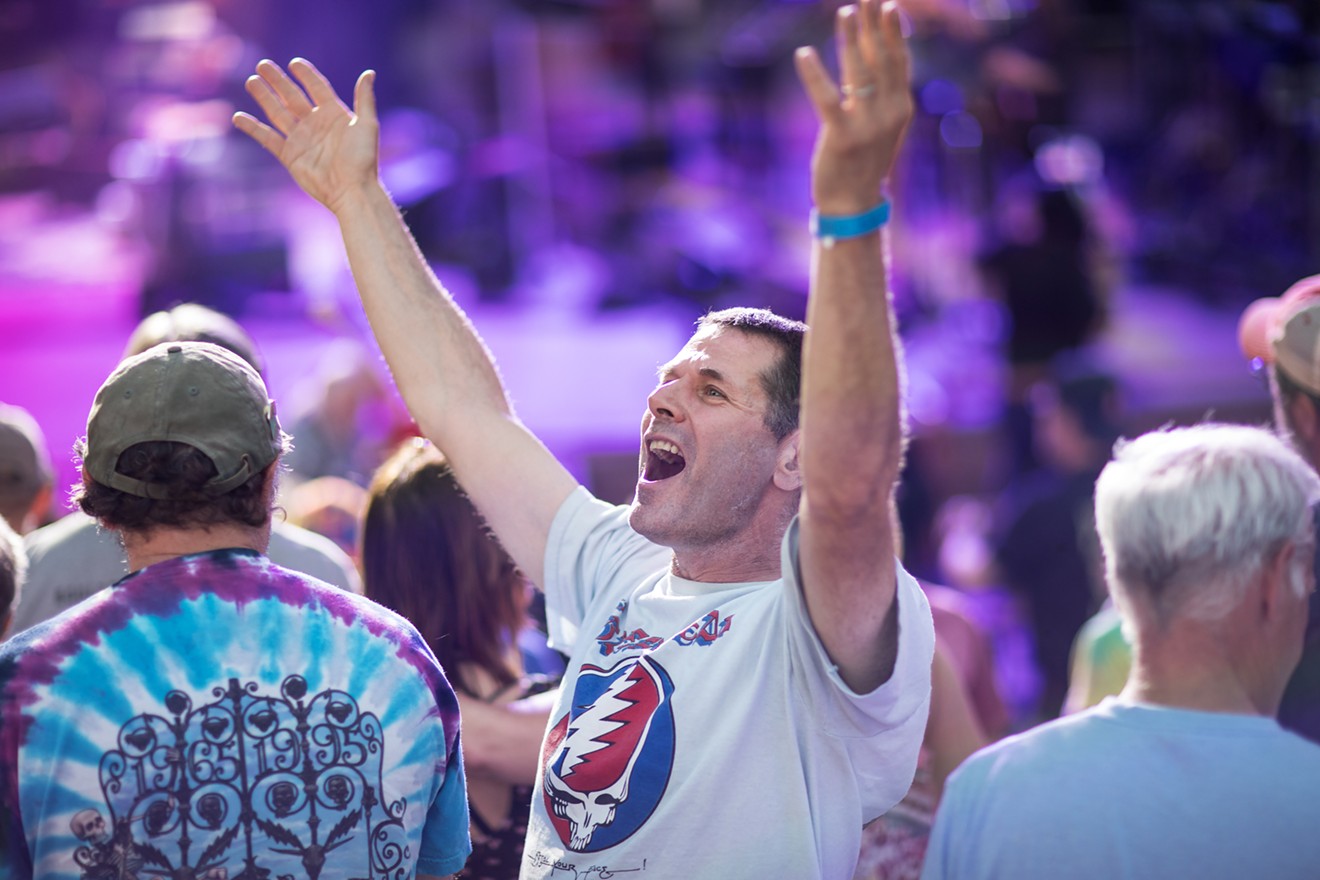 All praise the memory of the Grateful Dead. Jacqueline Collins
For old-timers and newcomers alike to the cult of the Grateful Dead, co-founder Bob Weir and his current band, Wolf Bros, brought a revival to Red Rocks on June 8. And at the first of four Colorado shows, Deadheads from 2 to 92 were ready for ecstasy.

The day was a sweaty mess, good for dehydrated naps, chilled watermelon and a blissed-out show. The parking lots were full. Deadheads were hiking up the road to the venue, panting, breaking to puff on their pipes like the plant was still illegal, and encouraging each other along the way by flashing peace signs and summer-night grins.

Amid the tie-dyed white folks with dreads eager to gyrate and raise their hands to Grateful Dead classics were parents with prep-school, law-firm haircuts. They opined about the quality of their 5G signals; crafted conspiracy theories about how one wayward stoner boasting the longest bleached-blonde dreads in Milky Way history was probably scalping tickets; and talked about how microbuses looked like Volkswagens but were really Mercedes-Benzes: "We should buy one." 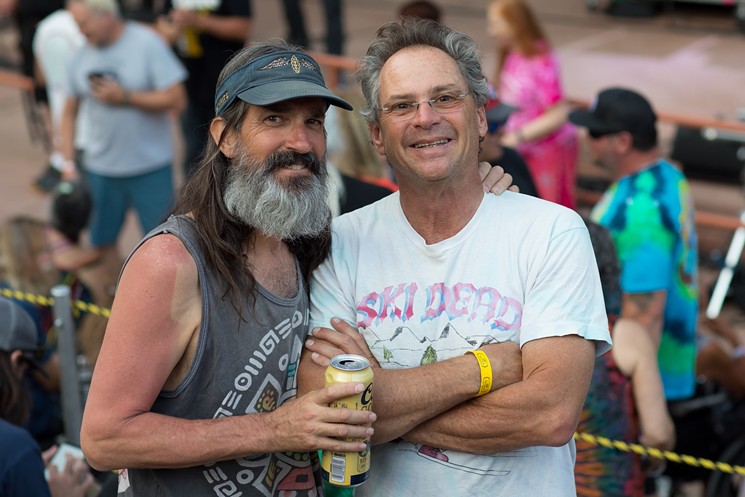 The joy of a Red Rocks show has returned.
Jacqueline Collins
Some joked about checking their step counters; others — the trail-running types — shot up the hill, heart rates low.

One shirtless, skin-and-bones Dharma bum in his twenties stood next to me for some of the night, using his shirt to cover his head like a tallit and davening to the glow of his iPhone. That was when he wasn’t scratching his body like fire ants were gobbling him up. He put it best: “Red Rocks is easy on the eyes and hard on the thighs.”

He told me how his friend who had driven him to the show had freaked out on the way. No, not because of drugs, though the driver was acting like he was on them: He refused to answer questions — only giggled. And instead of bringing a ticket, he tried to walk in. No dice. “I told him that wouldn’t work,” the shirtless guy noted. “Thankfully, I have friends here to take me home,” he said, with all the joy of a hungry ghost.

Bob Weir & Wolf Bros played Red Rocks on June 9, 2021.
Jacqueline Collins
Weir opened with “New Speedway Boogie,” which ends in the impassioned chorus “One way or another / This darkness got to give,” a cathartic mantra that transported fans from pandemic to pleasure. From there he segued into “Truckin’,” and when he got to that most famous of Grateful Dead lyrics, “Lately it occurs to me / What a long, strange trip it’s been,” the crowd went berserk.

The set list was no strange trip — but it was a good one, loaded with crowd-pleasing numbers that kept everybody singing along, no matter how high they were. Weir was accompanied by untamed keyboardist Jeff Chimenti, who drove the band, pounding honky-tonk hard on the piano, and guitarist and pedal-steel player Greg Leisz.

Along with the three stars, other musicians played horns and strings and drums, winding their way through decades of Grateful Dead tunes with ease, honoring each era’s sound, mercifully avoiding the interminably self-indulgent jams that only psychedelics make palatable — and perhaps performable. In other words, they stuck to the country, blues and Americana songs that suit Weir’s gritty, full-bodied voice, which is stronger than ever.

Jeff Chimenti on the keys.
Jacqueline Collins
Throughout the show, nearly 5,800 fans bounced around the bleachers, skipping, dancing and leaping, never falling in the process. They wore dancing-bear bathrobes, overalls and a bazillion band shirts from the Dead and all its offshoots.

“BOBBY!” shrieked one man, in a nails-on-chalkboard voice that caused the crowd to erupt in pleasure. Though the sound ripped apart the music, everybody just laughed.

Dance, Deadheads, dance.
Jacqueline Collins
One thing about Deadheads: No matter how annoying one is being, everybody else just goes with the flow and enjoys the scene. And that’s the bliss of it. "Ain't no time to hate; barely time to wait," sang Weir, splitting up the song "Playing in the Band" with "Uncle John's Band." They were doing what Deadheads have been doing since the ‘60s: dancing, tripping, hugging and smiling to music as open-armed as the community itself.

The concert ended with a string of crowd-pleasers including “Terrapin Station,” “Standing on the Moon” and “Sugar Magnolia." The encore was “Touch of Grey," with the comforting lyrics that Weir repeated over and over: “I will get by...I will survive.” That hope, that salvation through embracing life in its joys and sorrows, is the gospel of the Dead that Weir continues to preach.

In some form or other, Weir and the Dead will live forever.
KEEP WESTWORD FREE... Since we started Westword, it has been defined as the free, independent voice of Denver, and we'd like to keep it that way. With local media under siege, it's more important than ever for us to rally support behind funding our local journalism. You can help by participating in our "I Support" program, allowing us to keep offering readers access to our incisive coverage of local news, food and culture with no paywalls.
Make a one-time donation today for as little as $1.