Call of the Void on New Album, Pain and the Mystery of Mass Suicide 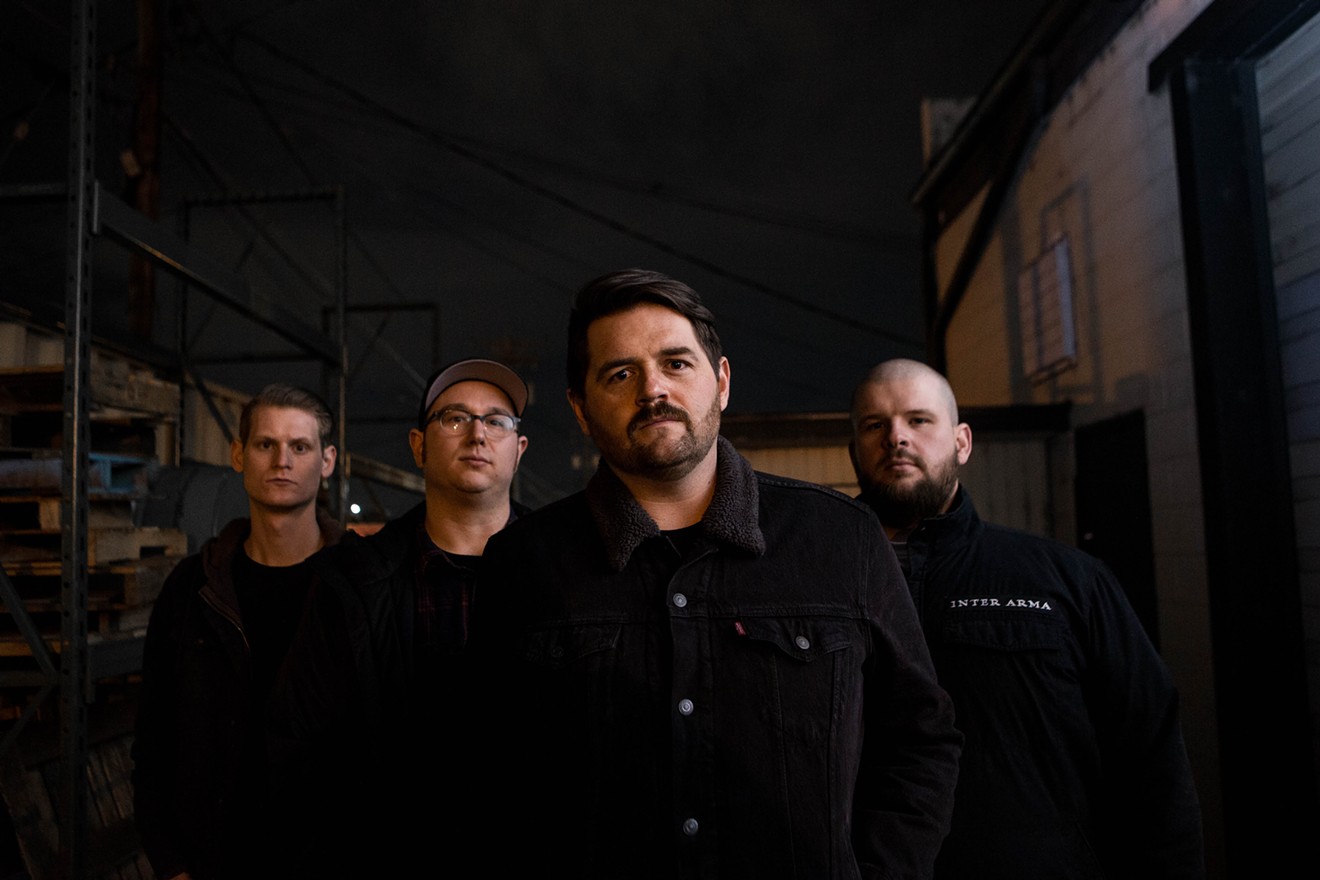 Call of the Void is back with its first new record since 2015. Alvino Salcedo
Despite some of the greatest records being based on harrowing personal experiences, it's fair to say that Boulder metal band Call of the Void possibly dug deeper than it should have on its new record, Buried in Light.

On its first LP since 2015, the group explores the deep end of sorrow. Between drummer Gordon Koch's digestion of a podcast about the ’90s cult Heaven's Gate, the quartet's various life experiences, and two bandmembers dealing with health issues, the musicians reflected on the pains and struggles of life as they attempted to determine how people reach their breaking point.

Luckily, they survived writing the album and emerged with a better understanding of empathy and a greater appreciation for life itself.

We spoke with Koch ahead of the Buried in Light release show at the hi-dive on Friday, May 10.

Westword: How did the creation of Buried in Light differ from that of previous records?

Gordon Koch: This one we wanted to spend as much time as possible honing songs, structures, and making sure that we had a musical lyrical story to tell.

Compared to previous records, did you have to do things differently for Buried in Light?

We demo'd more than we ever have for this one. We went out and got recording equipment for the studio for our practice space and recorded every song skeleton and fleshed them out as thoroughly as possible.

The best part about recording your practices and songs is that with a certain amount of production, you can listen back to it as if you are not the one playing it. You can listen to it objectively.

When you’re playing the song live, you’re focused on your instrument and performance, so you lose a little bit of the translation. Demoing allowed us to really nitpick and focus and layer all these songs.

Was demoing everything a habit you were already headed toward, or did that happen out of necessity because something needed to change in the band?

It was kind of both. We were in a way going that way, but we were on a tour with someone, and they were talking to us, saying, “Oh, yeah, we demo everything, it’s great,” and we were like, “Oh, shit, well that’s a great idea.” So we went back and threw some cash down for it.

As soon as we got everything rolling, it was like, oh, wow, okay. Hindsight 20/20, this is fantastic. Once we had that in control, it was like full steam ahead — let’s really hammer this and use this.


What were some specific ways you grew and evolved while working on this record?

Through the entire process of writing this record, we had to put a lot of our pride aside and focus more on how to be a cohesive band. For me, especially, I play drums, and for a guitar player to tell me, “You should play it like this,” in the back of your head, you’re going, “Well I play drums, fuck you, you play guitar, who are you?” But they have something deep in mind, and I really have to consider that.

I made myself more of an open book. Especially, I had some concrete ideas down, but for this recording process — during the demoing, but especially when we were in the recording studio — I laid down the foundation, and then wherever the bandmembers were in the studio with me, whenever there was a point of like, “Okay, we need some flare here, we need to change this up,” I pretty much went in empty-headed, but with the skills to handle whatever they threw at me.

A lot of the fills, a lot of the nuances that happen in this record, were written and created on the spot with everybody putting in their ideas — recording engineers, all members and myself, trying to pick out, What’s going to be the best to make this?

Sounds like you’d need a lot of trust in a relationship to be able to pull that off.

Absolutely. We’re in this for each other, for the greater good of the band, especially when it comes to writing the music. If it works and something sounds good, we’re all about it. But if there’s contention, then we turn into a very democratic society of votes outweigh personal feelings. If you’re really stuck on something and everybody else does not like it and it doesn’t flow, if it’s voted on and you get a "Nay," you move on and accept it, and we adjust as such.

The trust is knowing that as a group, we know what’s best, and it shows to the extent that we agree with how it turns out — and it has worked out.

What were some big talking points during the album-writing process?

It became a concept record. During the time of writing all the music, I had listened to this wonderful podcast on the Heaven’s Gate cult. I got fascinated with the story of those people and what drew them to commit their final act, which was a mass ritual suicide in a sunny San Diego mansion.

The fact that these people were computer programmers, they had families that loved them, they were a relatively peaceful group that were just into this high learning sort of space-y, bizarre Christian church that wasn’t violent or nefarious. They just had this weird perception.

But they were all intelligent people. When you think about it, you’re in what’s one of the most beautiful parts of the country, you’re intelligent, you have a good job, you have people that you talk to, people that want to talk to you, that want to have you in the world, and how do you just willingly and gleefully walk away from all that? What in this life makes you kill yourself when it’s supposedly going all right?

With that, I started writing out ideas and asking everyone else to come up with concepts and vignettes in our daily life of America and the quote-unquote first world, and about the things that lead you to that decision. Because that’s a big step, considering the sole purpose of humanity is to survive.

You look at war-torn countries and famine and how much people will do just to stay alive, how much pain you’ll put up with just to survive, and then you look at these people living comfortably in society and going, “You know what? I’m done. I’m done and am just going to walk away from it all." What brings you there?

We had to dig deep and pull a lot of our own life stories, especially recently, and just look into what takes you there: How close have I gotten? How close can I get?

Did you guys come up with a significant answer or response to that question?

Like I said, it’s all vignettes, little portions of life that chip away. If you imagine a human being having a health bar [measuring] the will to live, and we go through each little infraction that chips away at it.

The story blends particular moments in your life that do this — breakups, relationships falling apart, your job is sucking you dry, mental illness, physical illness, that sort of stuff.

When you take somebody that is weak physically and being chewed away and is weak-minded, we introduce other nefarious characters: cult leaders, abusive mental types, the different sects of popular religion, the Catholic Church, the Protestant Church, whichever — those types of people that bend the mind of those that are already injured and need something to begin with.

That’s where they take control of seemingly normal people and get them to do whatever crazy shit they can come up with. The album flows almost as a loose story that is just about how you’re being chipped away and people can get in your head.


That sounds pretty exhausting, to have to parse though often for writing and recording purposes. Do you feel like the process taught you some things about yourself?

Absolutely. I was diagnosed with an idiopathic blood disorder, so it’s an unknown blood disorder. It changed my life completely, in the sense that I can’t do all the normal stuff I used to do.

In that process, I was handed a card that said, “Stop being you. Change immediately,” and that’s a struggle. You’re used to living a certain lifestyle and doing all these things, and now I have to stop, pivot, adapt and move on from there.

So how do I be a heavy-metal musician and live life on the road and make all these crazy changes and stop thinking about the big picture and focus on myself and family and the people around me to make sure that I stay around longer?

At the same time, our guitar player, Nathan Siegrist, had a really critical injury where he was hemorrhaging blood from his stomach and had to have emergency surgery.

We lost him for half the writing period of this record. He was out, medically, for the count. There were other things that happened during this where the question of “What’s the struggle in life?” was posed, and we literally experienced, to a degree, a struggle in life to get this thing completed and recorded and out there, and still maintain the energy to be a band.

Definitely. Like they say, what doesn’t kill you makes you stronger, so we’re better people for it. We know what to do to make ourselves happy and productive and creative.

It definitely was a little more trying than it wanted us to be, but it also helped push out a better product and be better people.

Call of the Void album release, with Green Druid, Casket Huffer and Bleakheart, 8 p.m. Friday, May 10, hi-dive, 7 South Broadway.
KEEP WESTWORD FREE... Since we started Westword, it has been defined as the free, independent voice of Denver, and we'd like to keep it that way. With local media under siege, it's more important than ever for us to rally support behind funding our local journalism. You can help by participating in our "I Support" program, allowing us to keep offering readers access to our incisive coverage of local news, food and culture with no paywalls.
Make a one-time donation today for as little as $1.