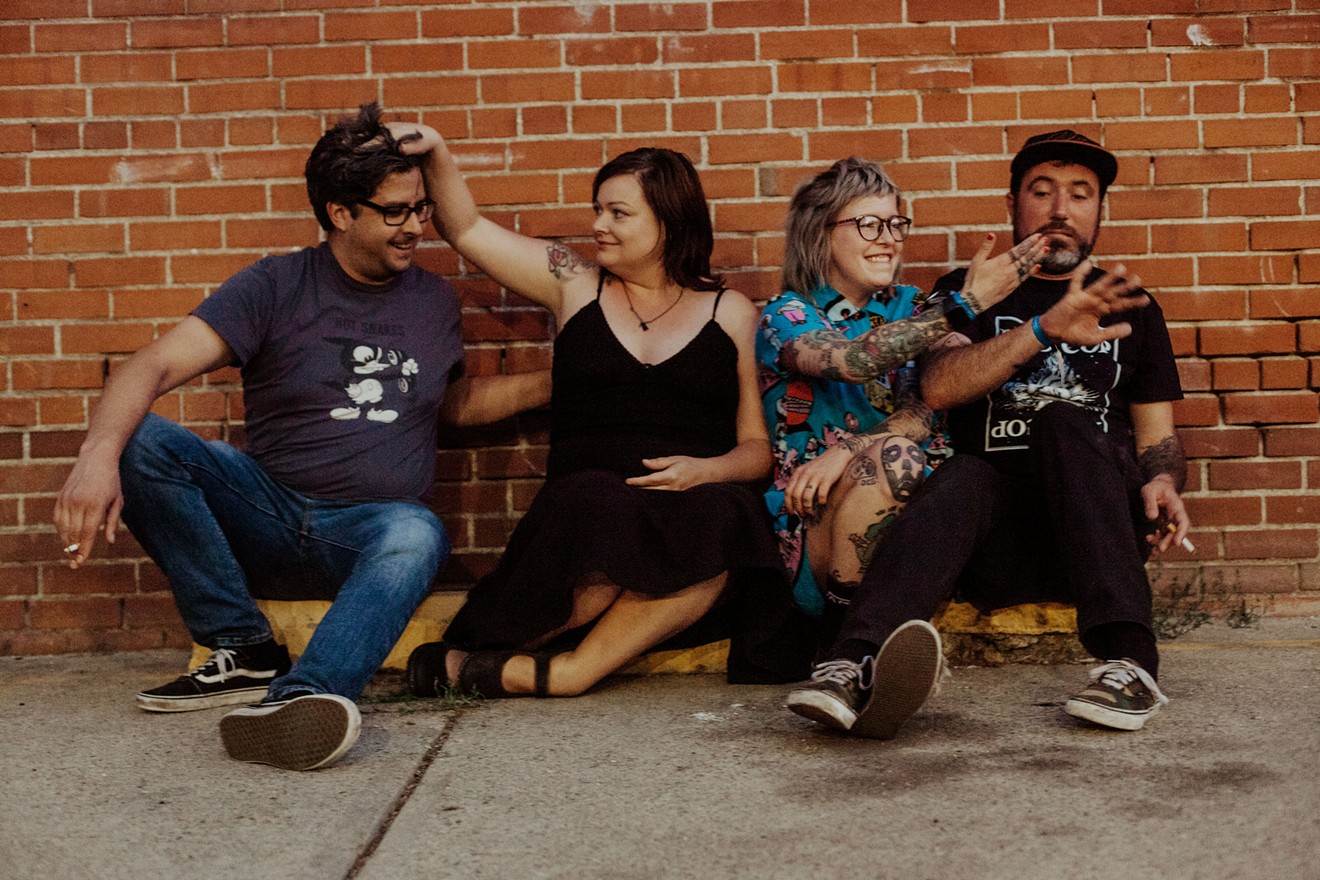 Cheap Perfume is set to release its second album, Burn It Down. Kate Rose
“When I went away to college,” says singer/guitarist Jane No, “it was all about how to protect my drink from other people and how to lock my windows and doors properly, and how not to walk alone. That was the first time I was like, 'Yeah, why shouldn't we be able to walk down the street? Why is it on us to protect ourselves from some predator?' When that becomes the norm, then it becomes the woman's fault if she doesn't take those measures to protect yourself. And it shouldn't be on women. It's on men. Women can't change men. We can't change rape culture.”

No's band, Cheap Perfume, may not be changing men or the social norms that make being a woman a constant battle against stealth sexism and covert subjugation, but the group isn’t going down without a fight. Over the past three years, the band, fronted by firebrand feminist Stephanie Byrne, has gained a reputation as a vocal proponent of women’s rights and a vehicle for pushing feminist ideals in the Front Range punk scene. On November 30, Cheap Perfume will release its second full-length, Burn It Down, a record that takes on everything from sexism to fascism and even what No says is a plague of false allies within the very scene that spawned it.

“We realized, especially being in this band over the last few years, some people believe they are feminists, but then they're not,” says No. “When Stephanie was single, we really saw them come out of the woodwork, guys who say they are feminists, just trying to impress women so they can sleep with them. We saw a lot of men telling women how they should handle and deal with their sexual assault. And then there's of course trans-exclusionary radical feminists.”

The track “Fauxminism,” she says, is the band’s response to anyone who would pervert feminism for their own purposes, but also a warning against the self-imposed ignorance of extremism, people who are so closed off to other viewpoints that they have a very narrow idea of what's right and wrong. No admits it’s not always an easy road to walk.

“So even though they might call themselves lefties or whatever, they're actually just as bad as a Christian fundamentalist or someone who is extreme on the other side,” says No. “I explore that in myself a lot, too, because I'm also a yoga teacher, and exploring ideas of compassion, it's hard. It's supposed to be about compassion for everyone, and that's hard.”

No says she’s had to challenge her own ideas from the very beginning of the two-woman, two-man band, when the lineup didn’t take shape as she’s imagined it would.

“I've always wanted to be in an all-woman band,” says No. “I've always wanted that energy, ever since I was a teenager listening to Le Tigre. Then when we formed, I was like, 'Oh, I don't want to exclude my friends who are musicians just based on their sex — so that's how we ended up half and half.”

Having two men in the band hasn’t dulled Cheap Perfume’s ability to deliver its message. Burn It Down begins with “Put the Devil to Bed,” a ferocious song the band has been playing for years, and one that's particularly potent because it's autobiographical.

On Burn It Down, Cheap Perfume lead vocalist Stephanie Byrne sings about sexism, assault, and people who manipulate feminism for their own ugly purposes.
Kate Rose

“That one, it's actually her response to being sexually assaulted,” says No. “That song was how she sort of dealt with it in the aftermath.”

Even for someone as outspoken and seemingly strong as Byrne, it’s a tough subject to address.

“She's very vocal about it on stage,” says No. “She'll sometimes talk about, ‘This is about when I was raped.' What started happening is she would have a ton of people, like survivors, who would want to talk about it, which was kind of her intention, but that can be a little hard for her to be talking about all the time.”

While sexual assault is a devastating experience, No is clear that the everyday sexism faced by women and girls also takes its toll. And it starts early.

“I have nieces who are thirteen now, and yeah, I want to protect them, and I know there's going to be creepers looking at them if they dress a certain way,” she says. “On the other hand, I want them to be able to dress how they want and not be looked at like that.”

Sometimes it’s more subtle, she says, and comes from people you wouldn’t necessarily think would be sexist.
“We show up at the venue,” she says. “You start bringing your stuff in, and they assume you're like the girlfriend of somebody in the band, or the merch person.”

Oddly enough, No says Cheap Perfume didn’t necessarily set out to be a feminist band. It’s something that grew organically from the members’ ideals and experiences that has continued to evolve, a happy accident that they are more than willing to embrace.

“We've had some snotty comments, and I've dealt with it my whole life, around like, 'Oh, a girl band,'” says No. “Like If there's one woman in the band, you're a girl band. What year do we live in? We’re not even all women, but we do still get that. It's going to come up, and we expect to be asked about that. There are people who are going to label us a girl band anyway; let's just throw it in their face. And I don't think that's a bad thing. We own it. We're proud.”

Cheap Perfume plays a record-release show with Spells, Plasma Canvas and Wild Lives at 9 p.m. Saturday, November 30, at the hi-dive, 7 South Broadway. Tickets are $10 and available at the hi-dive website.

Hear Cheap Perfume and more favorites from Westword writers on our Westword Staff Picks playlist.
KEEP WESTWORD FREE... Since we started Westword, it has been defined as the free, independent voice of Denver, and we'd like to keep it that way. With local media under siege, it's more important than ever for us to rally support behind funding our local journalism. You can help by participating in our "I Support" program, allowing us to keep offering readers access to our incisive coverage of local news, food and culture with no paywalls.
Make a one-time donation today for as little as $1.