Cheap Perfume: “Believing in Equality Means That We Hate Men” 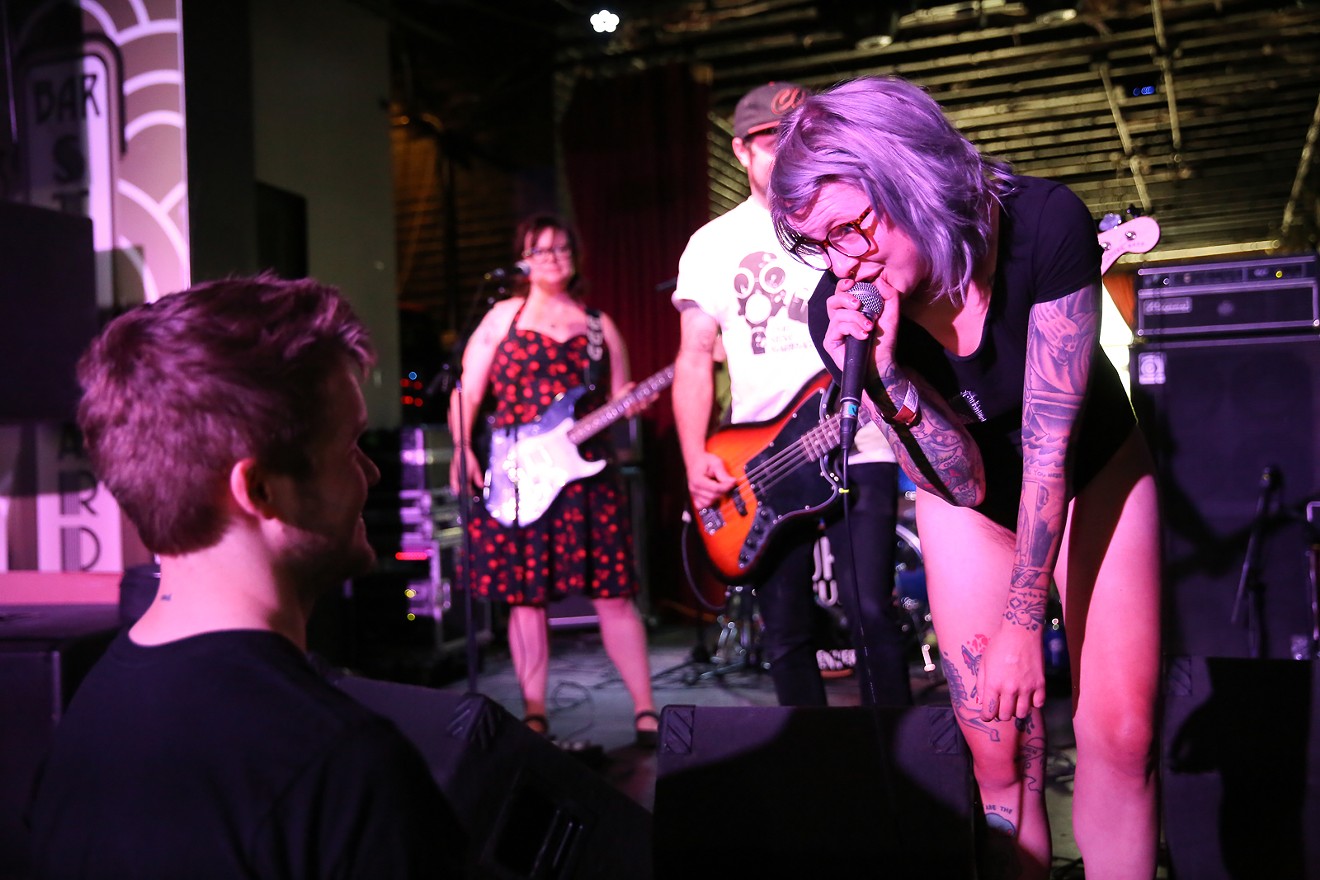 Cheap Perfume at Bar Standard. Brandon Marshall
Inspired by the ’90s Riot Grrrl movement and bands like Bikini Kill and Bratmobile, the members of Colorado femme-core punk band Cheap Perfume have been trashing the patriarchy for the past six years, taking shots at Donald Trump and emboldening the anti-fascist movement.

At the heart of Cheap Perfume's lyrics are self-empowerment and feminism.

“To us, feminism is believing in the equity of all people, especially those who are oppressed or viewed as lesser in society,” says singer, guitarist and co-songwriter Jane No. “I really think that feminism is for anybody who wants to fight for the rights of women, and that’s all women. So that's including trans women and all kinds of different folks from different backgrounds.”

“We definitely wrote 'No Men' as a super-satire piece about the perception of feminism,” says singer and co-songwriter Stephanie Byrne. “Especially the first line being ‘Believing in equality means that we hate men.’ It’s just super tongue-in-cheek and kind of a big fuck-you to the idea that being a feminist means all these things, when it’s like, if you just get down to the brass tacks of it, you’d probably understand what feminism is if you put any effort or brainpower into it whatsoever.”

“We had a lot of fun writing it,” says No. “Stephanie and I were definitely laughing a lot during it, but then we’d think about things that pissed us off, too. That’s kind of our writing process. We wanted it to be very confrontational and in-your-face, challenging those stereotypes about feminists.”

“White men are the most privileged, and they’re also the ones who understand what privilege means the least, in general,” says No. “As our ideas of what being a man is have evolved, we just wanted to be super clear that the experiences of a cis white man are not the same experience as a trans man or a Black man or a Native American man.”

Over the years, Cheap Perfume has developed an impassioned fan base moved by the band’s feminist and anti-fascist stances in songs like “It’s Okay (to Punch Nazis),” “Slut Game Strong,” and the 2019 album Burn It Down.

“I don’t think we would have stuck with it this long if we didn't have people — especially women and people who feel marginalized somehow — talking to us after our shows, like, ‘You know, that was powerful to me,’" No says. "Some people will feel validated when they hear somebody singing about sexual trauma or sexual harassment or sex-positivity. That's definitely what keeps me wanting to do it."

Both songwriters take heart from the music of younger feminist punk groups such as the Linda Lindas, a Los Angeles-based Asian-American and Latinx punk-rock band that blew up after a video of the act playing "Racist, Sexist Boy" live at the Los Angeles Public Library went viral.

“I would want our legacy to be that we inspire people who maybe otherwise wouldn’t have the inclination to use their voice, and that we especially inspire young people to not be so quiet,” says Byrne. “Again, just kind of going back to the idea that you’re not ‘too much.’ You’re enough. We want people to live their authentic lives being their authentic selves, and to have safe places to speak their truths.”

Music also allows the members of Cheap Perfume to honestly express themselves and process past traumas.

“Speaking of trauma and sexual assault is really hard for me because of my PTSD,” Byrne notes. “Music has given me a really big opportunity to put those feelings out into the world.”

“Music is a huge outlet for saying what I mean with no filter and not worrying about it,” adds No. “When I get up on stage, I just scream or sing. I feel really empowered, and I feel fully alive and fully expressed. I hope that when other people listen, they feel validated, heard and like they’re not alone.”

The bandmembers say they have experienced sexism in the music industry. “We’ll stop talking about being women in our music when we stop being called “merch girls” when we walk into a show, ” Byrne says.

“Sometimes I'll read articles that say, ‘Why do [bands like Cheap Perfume] have to make that a thing?’” says No. “Like, ‘Can’t you just be a band and not talk about being a woman?’ And you should be able to, but you can’t, because we’re not treated the same as any other band.”

“I think that we’re all sick of it,” adds Byrne. “I don't think that any one of us is around to tolerate it anymore. I think that women, especially over the last four years, have had to really take a look at the landscape around them and understand how fucking terrible it is. I mean, everything that’s even going on with the abortion bans, it’s just getting really, really clear that our bodies are considered commodities, and we are, I guess, to do as we are told. Nothing in this system is sustainable, but I certainly don't think that the sexist, patriarchal part of the system is sustainable. I think time’s up.

“There’s a lot to scream about,” she concludes. “And it sure feels good.”

For more on Cheap Perfume, go to cheapperfume.bandcamp.com.
KEEP WESTWORD FREE... Since we started Westword, it has been defined as the free, independent voice of Denver, and we'd like to keep it that way. With local media under siege, it's more important than ever for us to rally support behind funding our local journalism. You can help by participating in our "I Support" program, allowing us to keep offering readers access to our incisive coverage of local news, food and culture with no paywalls.
Make a one-time donation today for as little as $1.