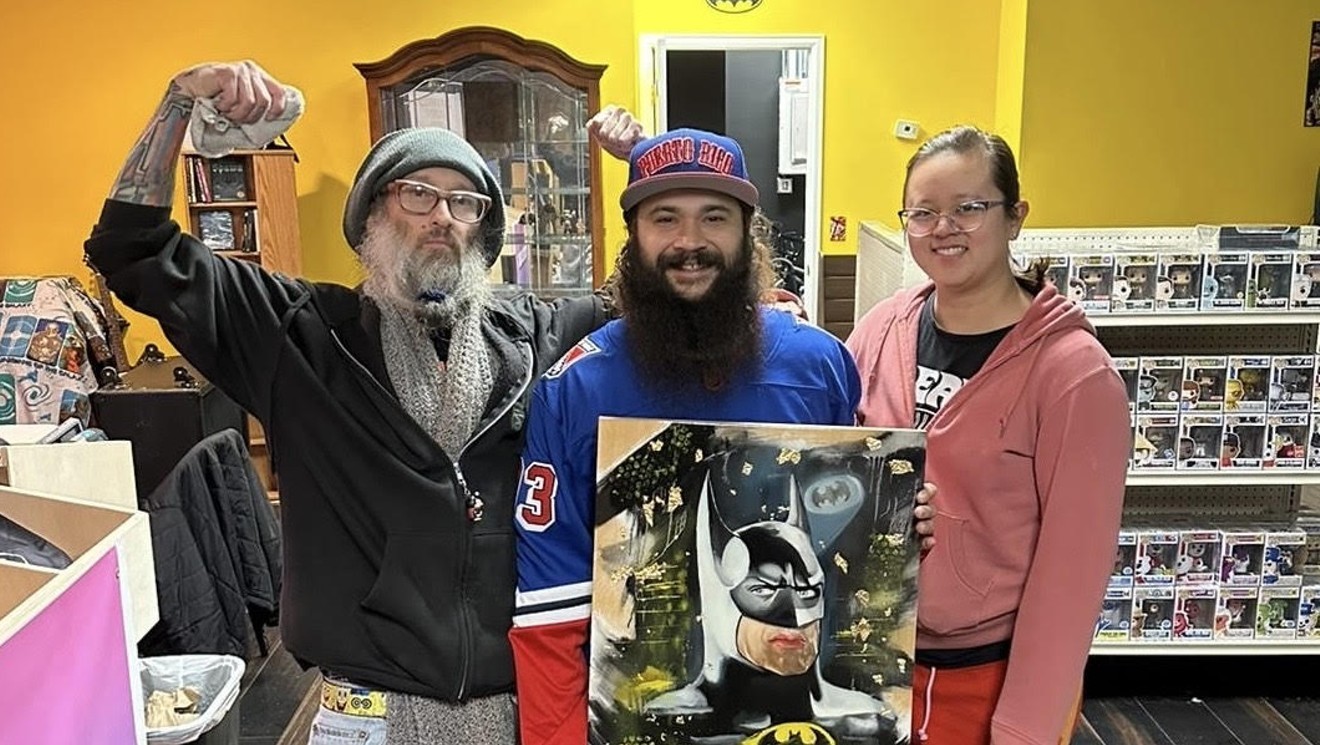 Troy Bolton, Justin Gnazzo and Seekay Gnazzo are set to open City Records Comics & Toys on Colfax. Courtesy City Records
Justin Gnazzo remembers accompanying his dad, Nick, to work in Brooklyn in the 1990s. It was just a quick train trip downtown to the Marvel offices, where Nick Gnazzo would drop off his commissioned comic book illustrations. Justin recalls how the editors would gift him goodies and merch based on the pages his dad helped bring to life, including X-Men. He's been a proud comic book nerd ever since.

“I grew up around it. My dad, Nick Gnazzo, was a comic book artist [from 1989 to 2004],” Justin says, adding that his father is now an electrician, still living in Brooklyn. “I grew up watching him illustrate comics. This was prior to doing comic drawings on iPads and stuff. Since mailing it to the Marvel offices would take two days, we would just take the train and go to the Marvel offices. The editors would give us action figures and stuff. I’ve just always been around comic books and illustration.”

That passion for pop culture followed Justin (affectionately known as “Doctah Jay”) into adulthood, from curating art shows to collecting toys, and he's now hoping to share it with the local community with the help of his wife, Seekay, and longtime friend Troy “Tbone” Bolton. The three recently announced that they’re opening City Records Comics & Toys at 1331 East Colfax Avenue. While there's no official opening date yet, the shop is set to debut at the beginning of the year.

Bolton met Justin while the two were working at Mutiny Information Cafe. They'd always talked about opening a one-stop shop with everything from vintage vinyl to Teenage Mutant Ninja Turtle action figures, but the opportunity hadn’t presented itself until recently, when the East Colfax storefront opened up.

“I was in the music department; [Justin] was in the comics and collectibles department. We became real fast friends,” Bolton recalls, adding that he’s been working in record stores since 1988. “Justin has mad comic book and collectible experience dating back to the mid-1990s. We’ve always like-mindedly talked about doing things together, which started off as thrifting on Thursdays looking for things that pertained to our business. We pitched a store idea to each other, looking solely for places on Colfax. The place we found, it just kind of fell into our laps, man. We saw the sign, turned around, saw it and did it.”

There's a need for such a space in a city that's not necessarily brimming with comic book stores, especially given the recent resurgence in collecting. But Justin doesn’t want to be just any old funny-paper dealer. His vision is to create a curated comic book store with products that reflect the current zeitgeist and pop culture. For example, when Disney releases a new Marvel movie, he wants to be the guy people go to to find the original source material.

“The thing about my comic shop is, I want to represent this more as a comic book and collectible boutique. It’ll be a rotating stock,” he explains. “I want people to call me and be like, ‘Hey, I know this is a long shot, but do you happen to have the first appearance of Wolverine [in The Incredible Hulk #180, October 1974]?’ And I’ll say, ‘Yes, I have three.’”

He’s quick to add that he’s into more than just comics.

“I love playing Magic. I used to play Pokémon as a kid,” he says, adding that those card games will be a part of City Records, too, along with Mobile Suit Gundam Wing, Yu-Gi-Oh! and Dungeons & Dragons. He has plans to host tournaments for all of those games, as well. “We’re trying to bring the community to the shop and show them that we’re here for them.”

Bolton, a proud metalhead with a wealth of knowledge in the genre, collects every format, including eight-track tapes, and gets excited about combing through bins to find hidden treasures for the shop’s shelves.

“We’ll have everything there — records, cassettes, eight-tracks, CDs, VHS tapes, Blu-rays, DVDs, posters, shirts. We’re going to have it all, man,” he says. “We love both the high end and the low end. I don’t mind looking through a lot of records to buy, sell and trade. You know, what’s crazy is that every format is collectable now. I think people are done living in the cloud. I still think people listen to too much music on their phone and don’t know how to hook up a speaker and turntable, but I can fix that. I think people just want physical shit. I think people just want shelf-worn stuff. I think people like to talk about what they have.”

This type of talk excites Justin, who chimes in, “I will never turn away an old Mr. T doll. Some random things like that light up my heart.

“Think about these things as...memories from childhood, memories of better times. Every time I see a Ninja Turtle that I used to play with in the bathtub at a store, I immediately want that so I can sit in the bathtub with that action figure,” he continues. “It brings those good feelings back, and those thoughts of, 'I remember when my dad got me that,' or, 'My mom took me to Toys "R" Us to get this hot new toy.' People used to bust down doors for toys. People got trampled for Tickle Me Elmo. Now we find them in bins at the ARC, like, ‘Oh, man, someone’s parent almost killed someone for this doll, and they’re throwing it in a bin.’ You can be part of this thing’s history to exist in its world [when] you can pass it on to someone else who it means more to.”

The collectability of vintage vinyls, action figures and Pokémon cards have only increased over the years. “The thing about collecting, especially with the boom of 2021, when Disney released all of those [Marvel] shows and comics shot through the roof — people were selling things for like six times more than market value. It was insane," Justin adds. "I made a shit ton of money; it was fantastic. But I realized a lot there, like, this is all FOMO, this is all speculation. I just started thinking [about] what’s going to hold value for a long time and not decrease.

"I started shopping with a different eye," he recalls. "I want to make collecting fair. When the boom was happening and I was looking at prices, I was like, ‘This is ridiculous. This is not what it’s worth.’ I want to show and explain to people, especially anybody younger than me, what it’s about. I want them to learn: Like it first; don’t just collect it because people want you to. I want people to come to me for things that they love, and I want to find those things for them.”

Like his father, Justin is planning to offer a “comic clinic” for comic book restorations at City Records. Seekay notes that there will also be a space for local artists and offerings. Snacks will be available, too, with the possibility of food trucks serving at certain times (Justin and Seekay owned and operated a food truck for several years). The trio is also proud of the store's customized shelving, especially the record bins, courtesy of CJC Contracting.

“Colfax is going through a lot of change. We’re opening up a store when we see a lot of stores closing. It’s a very interesting time for the market and our market,” says Bolton, who is also a DJ and luthier. “We love physical media, and we’re bringing it back hard.”

City Records is going to be much more than just a bottom-line business. It will be a place for fellow music and comic nerds to meet and make merry, whatever they’re into.

“I want the community to teach us back, too,” Bolton says. “I’ve never stopped learning.”

For more information, find City Records on Instagram (@cityrecordscolfax).
KEEP WESTWORD FREE... Since we started Westword, it has been defined as the free, independent voice of Denver, and we'd like to keep it that way. With local media under siege, it's more important than ever for us to rally support behind funding our local journalism. You can help by participating in our "I Support" program, allowing us to keep offering readers access to our incisive coverage of local news, food and culture with no paywalls.
Make a one-time donation today for as little as $1.