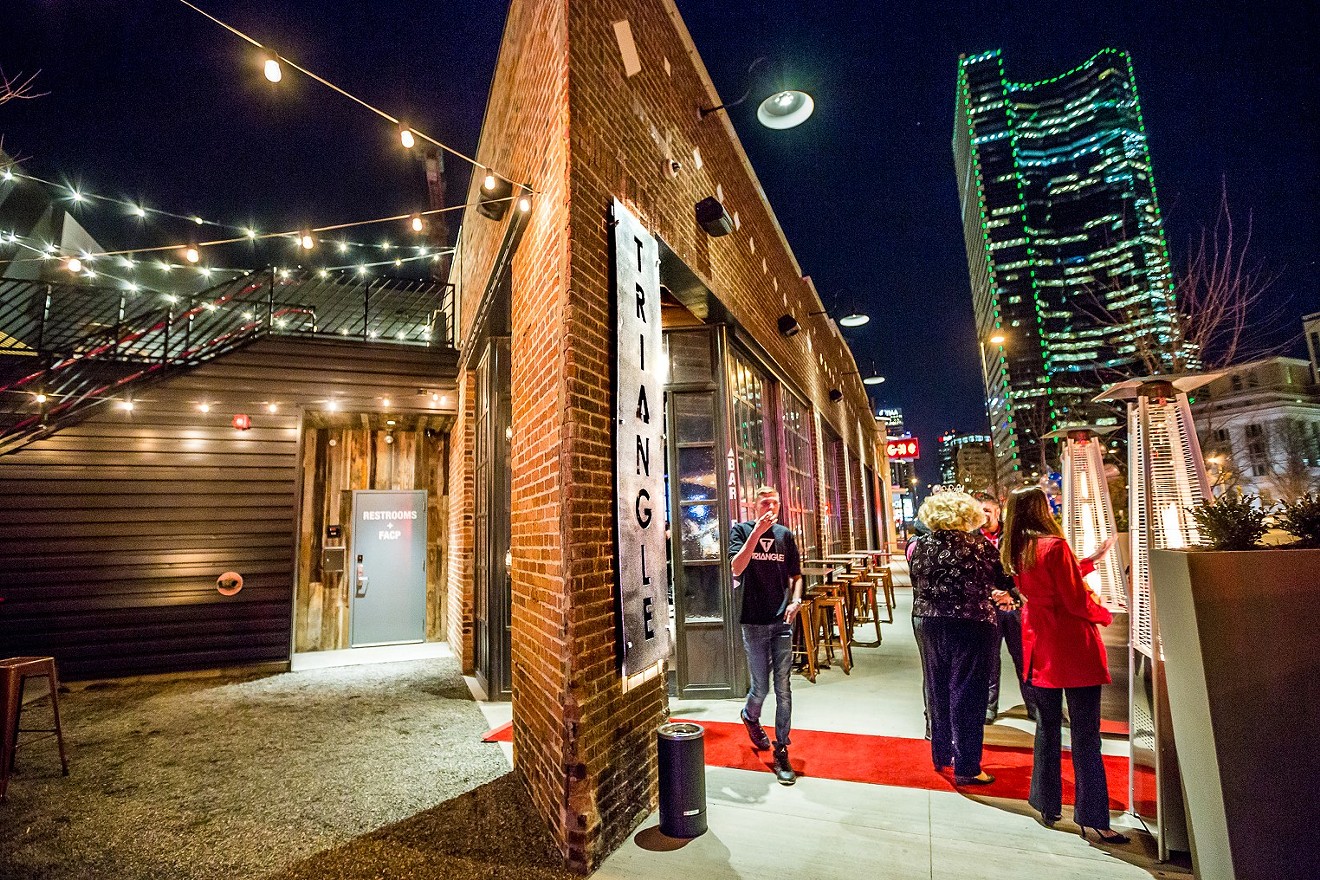 Jarred McClain, operations manager at Triangle Bar Denver, 2036 Broadway, says that before the November 19 shooting, security on a normal night at the Triangle consisted of hosts checking IDs and bags to make sure that contraband items weren't coming in the door. Staffers were also trained to watch for suspicious behavior and to report anything that piqued their interest. "We operate on a see-something, say-something basis," McClain says.

Most Saturday nights, the club hired an off-duty police officer, and for big events like Pride or the Triangle's charity beer bust, a frequent event when $14 gets club-goers all the beer they can drink, the venue usually added private security guards, too.

But after the Club Q shooting, the Triangle has increased security on a nightly basis and upped its screening of items coming into the club. On November 30, the staff participated in active-shooter training with an outside company; McClain says the Triangle will offer periodic refreshers.

The club was just winding down early on November 20 when one of the bartenders told McClain what was going down in Colorado Springs. "Your mind goes a mile a minute when things like that come up," he recalls, "and you start to think, 'Are my friends down there? Are there people I know that are involved in that?' More immediately, [we think of] the safety of our patrons that we have in our club: Is this something that’s going to spark other attacks?"

Joey Miranda, owner of #VYBE, 1027 Broadway, says that the club is now taking extra security measures. "We can’t live in fear," he says.

As word broke of the Club Q shooting, "we snapped into business mode to think how we can protect our staff," recalls Kelela, general manager at X Bar, 629 East Colfax Avenue.

The bar already works with a private company to have two to three licensed security guards on a regular night. There's a camera in the parking lot as well as at the front gate, and the bar just got new cameras that will be placed outside the building for a wider view of Colfax. Hosts were already checking bags and IDs at the front door; after the shooting, X Bar decided to implement a metal-detection system that's used every night. It also has armed guards on the weekends now, placed right at the gate.

Kelela says that the club has been concerned about security since the deadly shootings at Florida's Pulse nightclub in 2016. "I think anybody in this industry after Pulse has always had that in the back of their head and thinking about what we would need to do in that event," Kelela explains.

Staffers at the Triangle and X Bar are close with each other and compare notes on safety measures. "If you go to Triangle, you can take the same backpack you brought here," Kelela says.

They're close with others in the LGBTQ+ community, as well. At a recent drag show, X Bar asked for donations and matched them to support Club Q victims and family members, as well as help Club Q staffers who are now out of work. It's planning another drag fundraising event next month.

On Friday, December 2, the Triangle will hold a raffle and auction to raise money for the Club Q victims as well as awareness. Entertainers such as Coco Bardot, Marcie Smith, Porsha DeMarco-Douglas and Zarah Misdemeanor will be on hand, as will mayoral candidate Alex Valdez.

"I think LGBTQ spaces are kind of accustomed to taking care of our own, going the extra mile in our own house," Kelela says. "We’re used to having to fend for ourselves."

Triangle Bar Denver will hold its Club Q Benefit Event from 7 p.m. to 2 a.m. Friday, December 2, at 2036 Broadway; proceeds will go directly to victims, staffers and entertainers affected by the  shooting. Tickets can be purchased here.
KEEP WESTWORD FREE... Since we started Westword, it has been defined as the free, independent voice of Denver, and we'd like to keep it that way. With local media under siege, it's more important than ever for us to rally support behind funding our local journalism. You can help by participating in our "I Support" program, allowing us to keep offering readers access to our incisive coverage of local news, food and culture with no paywalls.
Make a one-time donation today for as little as $1.
Katrina Leibee, a recent graduate of Colorado State University, is an editorial fellow at Westword, covering politics, business and culture.
Contact: Katrina Leibee
Follow:
Twitter: @katrinaleibee