Bar Owner to Polis on COVID-19 Closure: "Get Us Some Goddamn Money" That's how Curtis Wallach, co-owner of the hi-dive, reacted to Governor Jared Polis's June 30 announcement that with COVID-19 on the rise again in the state, Colorado was closing bars and nightclubs within 48 hours, after having allowed them to reopen in a limited capacity two weeks earlier.

The news from Polis came the same week that the Colorado Liquor Enforcement Division sent a note to establishments that sell booze, revealing that the state would be increasing the cost of liquor licenses to help stave the economic bleeding that the government is experiencing during the shutdown. For clubs and venues that have been shuttered for nearly four months, this means that while most, if not all, of their revenue has disappeared during the pandemic shutdown, they will be expected to somehow scrounge up even more money for unexpected fees in order to help the state.

Before the June 30 shutdown announcement, Chris Zacher, the Colorado captain of the National Independent Venue Association and the head of Levitt Pavilion Denver, had reached out to Westword regarding that liquor license fee increase. "While the general public might be excited to hear that music venues can reopen, what they do not understand are the intricacies and how they affect our ability to reopen," he said. "Take Levitt, for example. Under the guidelines put in place by the State of Colorado, we can only open with a capacity of 175 patrons in a space that fits 12K people. A capacity limitation of 175 people doesn’t begin to cover the cost to produce a show. In short, we’re handcuffed in the back of a car at the bottom of a lake and the State is trying to sell us on the air bubble in the backseat being a lifeline. We’re waving a flag here. This is not a drill. The music scene as we all know it is not going to look the same very soon…."

Now that air bubble — reopening at limited capacity — is gone.

While the state's noble goal with this second round of shutdowns is to slow the rise of COVID-19 and avoid the catastrophic spike of the disease seen in Texas, Florida, Arizona and elsewhere, a side effect is that bars and venues might die along the way, killing off a major money generator for Colorado and putting thousands of people's jobs in jeopardy.

A live-music industry that Colorado tourism officials have bragged on for years is on the brink of disappearing. Already, venues like Le Cour, Armida's, Live @ Jack's and 3 Kings Tavern have closed for good, and dozens more risk doing so in the months ahead.

In a note to Polis on social media, Wallach spelled out the solution: "Go get us some goddamn money please, Jared Polis. I’m an owner of an iconic and historic music venue in the Baker neighborhood called Hi-Dive, that has nurtured countless local, national, and international artists on the rise the past 20 years. Does the city want us to survive this? Do you give a shit about Denver’s music scene and the places they call home? Prove it."

The hi-dive an hour before reopening from COVID-19 on June 20.
Curtis Wallach
Like most club owners, Wallach is quick to note that he, too, wants to fight the virus.

"For clarity, I don’t want to be open if it means more folks getting sick and dying," he explains. "But I also don’t want this place I and so many others hold dear to be left high and dry while we navigate the pandemic."

Wallach was especially irked by Polis rambling on about how he understood the value of bars — even if he no longer goes to them, as he did in his twenties. They're a stress relief, they provide people with space to socialize, and they build community, the governor explained.

"Polis says he understands that bars are 'important for many people in our state,'" opines Wallach. "Guess what? More than anyone, they’re important to the people that own and work at the fucking bars."

And his disdain isn't limited to Polis. The City of Denver, Wallach says, has failed to help support the scene, too.

"I keep getting surveys asking me how Denver has served my business during the crisis. The answer is 'terribly.' They haven’t done shit. Get us some goddamn money, City of Denver. Like, now," Wallach rages. "Y’all love to tout Denver’s creative sector...that we’re a 'Music City' on par with Nashville or Austin. Well, that’s us. So put your money where your mouth is or shut the fuck up about that in the future." 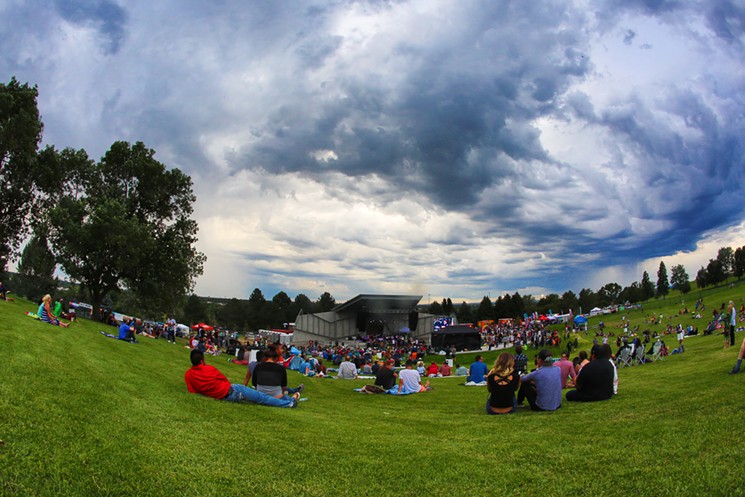 Levitt Pavilion Denver before COVID-19.
Brandon Marshall
While Zacher is frustrated with the government, he also lays some responsibility with the closures on bars and nightclubs that failed to open responsibly and ensure that patrons followed social distancing guidelines.

"It’s hard not to feel bad about the reasons why bars and clubs were shut down again," says Zacher. "It’s not safe. I wish it were, but it’s not. When we come back, we can’t use excuses for why patrons are not following guidelines. It’s our job to keep our patrons safe. Some of those who have opened have proven that they can’t or they don’t care to follow the guidelines in place. Others have followed those guidelines to a T. We’re hurting, we’re desperate, but let’s be smart about this when we can reopen again."

The Oriental Theater, which had just scheduled some concerts before very small audiences, will now go dark again because of Polis's new order. "We are rescheduling all of our July events for August," says co-owner Scott Happel. "It’s disappointing that this has to happen, but we fully intend to comply with all city and state rules."

Other bars and venues, such as the Larimer Lounge, will stay open because they have shifted to operating like restaurants; as long as they follow state guidelines for eateries, they should be good. And live music, with certain limitations, is allowed in those spaces.

"We serve Globe Hall BBQ at all our locations," says Larimer Lounge and Globe Hall talent buyer Kyle Hartman. "We are 100 percent reserved seating, masks are required, we sanitize all surfaces consistently. We are following all government regulations carefully.  Also, it's about to be announced that the street in front of Larimer Lounge is closing next week and our front patio is going to extend into the street.  We will have a whole new front patio with a reserved outdoor seating area for the remainder of the summer. We are very excited about this. Our operations will go on as planned."

If a venue stays open, it must follow guidelines, Wallach insists.

"The only thing I want to make totally clear is that I do not at all have a desire to be open if it’s putting the staff and customers at risk, and I don’t have any desire to exploit loopholes to be open," Wallach says in an email to Westword. "We *may* partner with Sputnik to expand their kitchen service to our side, but only if that seems safe and worth it and fully within the law.

"What I want is some fucking government aid, and for them to put their money where their mouth is concerning Denver's art, artists and venues," he adds. "And some access to funds for non-restaurant bars in general that are being royally fucked by this."
KEEP WESTWORD FREE... Since we started Westword, it has been defined as the free, independent voice of Denver, and we'd like to keep it that way. With local media under siege, it's more important than ever for us to rally support behind funding our local journalism. You can help by participating in our "I Support" program, allowing us to keep offering readers access to our incisive coverage of local news, food and culture with no paywalls.
Make a one-time donation today for as little as $1.