Colorado Native, "The Festival Guy," Wants Your Music Festival to Not Suck

Over the past five years, Tucker Gumber has been to more than ninety festivals. And he has come away from them with a simple message for festival promoters: Step it up, guys.

"Every festival has something that they can do a little better," says the 32-year-old Colorado native, speaking by phone from his Bay Area home. "And this book highlights everything a festival can do to put on their best show."

The book he's referring to is Festival Thrower's Bible, a 153-page primer based on Gumber's years of experience attending festivals and writing about them on his website, thefestivalguy.com. Released through Vendini Publishing, with illustrations by Andrew Steers, the book takes a plain-language, For Dummies–style approach to breaking down every element of mounting a successful festival — not just the sexy stuff, like booking a lineup, but also the humdrum logistics of having enough porta-potties and good crowd flow between stages.

In addition to Gumber's own insights, the book includes advice and commentary from a number of festival-industry experts, including Do LaB volunteer coordinator Bridget Baker and lighting designer David Huff, who has done "experience lighting" (i.e., any lights not pointing at the stages) for Coachella and Electric Daisy Carnival. "This is definitely a group project," Gumber says. "I've never thrown a festival; I'm the first to say it. I don't know how to book lineups or run volunteer teams or put in lighting. But I do know who does know it. The other contributors are festival all-stars."

Although Festival Thrower's Bible often seems to be stating the obvious ("If your venue does not naturally provide shade, then make sure to build it in"), anyone who's been to more than a handful of festivals knows that many of the details Gumber harps on don't get enough play, either within the industry or from the media (ahem, hi) that covers it.

"I would go cross-country to a festival that was super-mediocre, and there wasn't a single thing written about it that was gonna encourage that festival to do better next year," he says. "You would Google [for reviews], and Consequence of Sound is like, 'Radiohead was great!' Duh! Thank you, Consequence of Sound."

When you first meet Gumber, he doesn't strike you as a down-to-earth, common-sense guy. At a recent industry event in San Diego, the International Music Festival Conference (IMFCon), he was never without his trademark fedora and a flashy, paisley-embossed purple jacket. He introduces himself as "Tucker the Festival Guy." He used to sell video-conferencing software, and still projects a bit of an "always be closing" vibe.

But underneath all the personal branding, Gumber does seem ideally suited to his cause. Born and raised in Grand Junction (if you've passed through on I-70, "you've peed there," he jokes), he majored in restaurant and resort management at Colorado State University. He didn't attend his first music festival, Colorado's SnowBall, until his late twenties. By then, he was wise enough to view the festivities through the lens of his college degree, which taught him that when it comes to guest satisfaction, sometimes the little details are the most important.

"My very first porta-potty, I was like, 'Why aren't there lights in here?'" he remembers.

SnowBall was in March 2011; a month later, he attended his first Coachella, which cemented his new passion. "That was where I was like, 'Oh, my gosh...this is a lifestyle.'" Soon he quit his job and began selling SpiritHoods on the festival circuit. (L.A. Weekly even featured him in a photo essay on the furry headpieces at Coachella in 2012.) By the end of 2011, he had been to ten festivals. The following year, he launched thefestivalguy.com and officially made attending and writing about festivals his full-time job.

The seeds for Festival Thrower's Bible were planted in 2014 at IMFCon, where Gumber crossed paths with Mark Tacchi, Vendini's CEO. The San Francisco-based company specializes in festival ticketing and logistics, but Tacchi had been exploring the idea of starting a publishing division — and in Gumber, he found his first author.

"I like this guy's energy," Tacchi remembers thinking. "I gotta figure out how to work with this guy."

Gumber's growing success stems not just from his charisma, drive and salesmanship, but also from his insight into a single truism, which he repeated as a panelist at last year's IFMCon. "The crowds are starting to realize more and more that we are the festival," he declared to a roomful of festival producers. And more and more, the Festival Guy is the voice of that crowd.

"There wasn't anyone talking about [festivals] from the fan's point of view," Gumber says. Just four years after launching his website, he effectively owns that niche.

So what are the main things festivals can do to improve the overall experience? Every festival is different, Gumber says, but the areas he sees overlooked the most often are crowd flow, lighting and decorations, or visual art. His favorite events, which include Coachella, Lightning in a Bottle and Electric Forest, devote more care to these areas, and he says it's not a coincidence that they can sell tickets long before they've even announced their lineups. "If it's the right festival, you can have a credit-card machine on the last day, where people can buy tickets for next year, and it should sell out right there."

In addition to his work as a writer, Gumber serves as a festival consultant and also markets his app, FestEvo, which began as a simple festival-centric social-networking tool and has since grown to include complete artist lineups and other info from dozens of festivals all over the world. "I definitely took not the straightest line from point A to point B," he says, admitting that he knew nothing about app development when he first started. "But now I can't believe what our app does."

Now that he's done with Festival Thrower's Bible, Gumber is already back at work on another book, The Festival-Goer's Bible, which he hopes to publish next year. Just as his current Bible offers advice for festival organizers, his next book will aim to educate festival attendees on how to "fest" responsibly and get the most out of their experience. (First on his list: encouraging everyone to pick up trash, a crusade he's been on for several years.)

Of course, Gumber will be hitting more festivals, starting with Envision in Costa Rica in February. Then on to Okeechobee in Florida, Buku in New Orleans, South by Southwest, then back to the festival that started it all for him: Coachella.

"Coachella's a special place for me," he says. "What they do with the music-viewing experience — no one touches them. What they do with lighting and art? No one else does it. You go to Coachella once, you're like, 'Well, I'm coming back forever.' "

This article appears courtesy of LA Weekly.
How the Hell Do People Afford Coachella?
Here Are 10 Products for Smuggling Alcohol Into Concerts
Why Coachella Weekend Two Is Way Better Than Weekend One 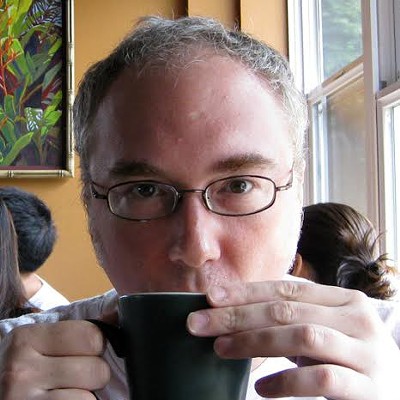