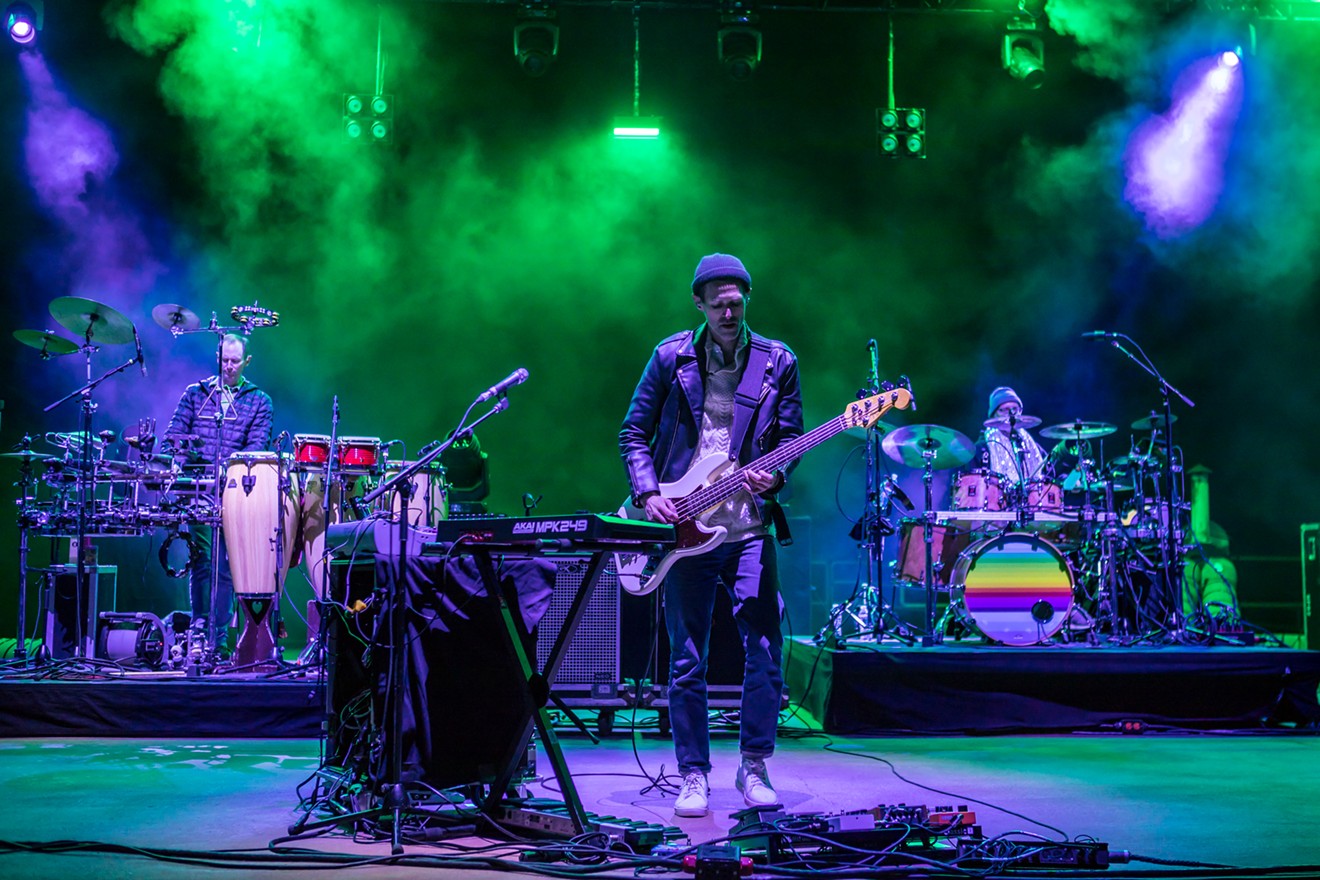 Lotus plays Red Rocks Amphitheatre on April 22, kicking off the venue's 2021 season. Jacqueline Collins
On April 22, I stood alone at Red Rocks, far from the crowd, bundled up in winter clothes, dancing to Lotus till my quads screamed and the soles of my feet felt like snapping.

This was odd behavior.

Lotus is an electronic jam band, and although it has members who live in Colorado, it's the type of group that a curmudgeonly retired punk like me would never think to catch. Judging from the albums I had heard before the show, the act's songs were too long and involved entirely too much pentatonic noodling on the upper registers of electric guitars. But Lotus's show happened to be the first of the 2021 season at Red Rocks Amphitheatre, and missing it wasn't an option — so I committed myself to embracing the concert with all the love of a neo-hippie.

Turned out, that wasn't so hard.

Everybody around me was smiling. Those long songs reminded me of long walks on the beach with a piña colada in hand, or a dance up a mountain in a sarong, or a cheery party with a hundred of your closest friends swirling like fairies on a neon raft floating into the stratosphere, liberating their COVID-frozen hearts to the beat of hand drums and sojourning, chipper tunes.

Embracing my inner hippie, I unhinged for the better. But relaxing that much did require some intention. 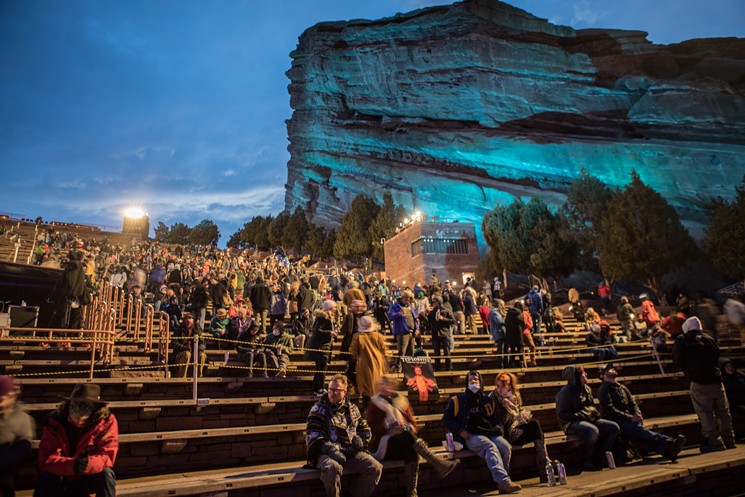 Red Rocks is back, with a 2,500-person capacity.
Jacqueline Collins
For the first song or two, I took breaks from dancing to do what I've done through much of this bleak era: I kept checking my phone for jabs from Twitter users with American flags and pictures of a frowning Trump. Endlessly refreshing my feed for those demoralizing messages is like scratching poison ivy — it feels so urgent in the moment, but leads to bloody, festering wounds and even more poison.

I had accidentally kicked a small colony of these grumbling trolls — or bots? or fire ants? — when, before the show, I had tweeted my enthusiasm that Red Rocks was back, noted how friendly everybody at the venue was, and offered my congrats to Lotus for kicking off the season. I followed that with "Here's to health, music and joy! (And very thick masks!)."

Thick masks? I might as well have torched Old Glory.

Bitter Twitter started pinging me with rants about Fauci and the CDC and laughable — or was it tyrannical? — government restrictions, and I feared I would spend the whole show politely encouraging the tweeters to think about some other parts of life...like music, food, the great outdoors or community.

Then I thought, just for tonight, forget ’em.

Here I was at a venue where one security guard loudly proclaimed, "This is the best job in the world." Where people were prancing up and down the stairs, and everybody and their mother were exclaiming how great it was to be back, and how exciting it was that the Red Rocks stage had a new roof.

I had no need to scratch the itch from political cranks grumbling on Twitter about masks when there was so much freedom, joy and love in the air. So I zipped up my phone and danced — not just nodding my head or moving back and forth politely. I raged like I do in my own living room, when nobody's watching.

And since I was on assignment...I took some notes. Lots of notes. I jotted down how I miss sweaty basement shows...and living-room shows...and garage shows way more than Red Rocks. How I remembered my mask but forgot my earplugs because I'm so out of practice going out, so I rushed to the bathroom to tear off some toilet paper to block out the sound, DIY style. I mused about a venue ad discussing how you should properly discard your chewing gum and looked around at all the black gum still stuck to the bleachers — probably for decades. I wrote about Green Mountain, which stands lonely and silent across the way from the stage, and wondered about whether I could run it at night and see or hear a Red Rocks show in the distance.

Guitar jams are bread and butter for Lotus.
Jacqueline Collins
I scribbled about a train howl sound that the band's keyboardist created. And about musical and visual nods to sci-fi and the vocoder that a singer used to make himself sound like a robot. And fans doing backbends, feeling the guitar ripple over their bodies. And the Tommyknocker-green and Hell-red lights and smoke that engulfed the stage. And the yellow lights stretching from the band toward the heavens, grasping to touch a God that died long ago and left nothing but a gloomy abyss, a few dozen wars and hundreds of thousands dead from COVID.

I jotted down the few things the band said:

"Can you believe it? We're at live music at Red Rocks?"

"Oh, man, it feels good to be back. How are you guys feeling?"

"Give me a scream if you came from out of town!"

"Give me a scream if you're here for all four nights!" Lotus puts pentatonic scales to work.
Jacqueline Collins
Sometime between bouts of note-taking and dancing, a person approached me, introduced herself as Lucy, and asked what I was doing writing in a notebook at a show — wondering if I was journaling about my trip through the music. I clarified that I was working and tried to brush off the notion that my notes were the stuff of poetry or self-exploration.

She extended her hand, and we shook. I must have looked startled, because she joked that we couldn't spread COVID because she was wearing gigantic ski gloves. But really, I was mostly shaken by having human contact with anyone other than my immediate family members.

Throughout the show, Lucy would walk by and wave and greet me by name — another thing a stranger hasn't done in well over a year. And toward the end of the night, as she and her friends were leaving, she said goodbye and reached up and surprised me with a hug.

"A stranger hugged me," I scribbled. "And I almost cried."
KEEP WESTWORD FREE... Since we started Westword, it has been defined as the free, independent voice of Denver, and we'd like to keep it that way. With local media under siege, it's more important than ever for us to rally support behind funding our local journalism. You can help by participating in our "I Support" program, allowing us to keep offering readers access to our incisive coverage of local news, food and culture with no paywalls.
Make a one-time donation today for as little as $1.