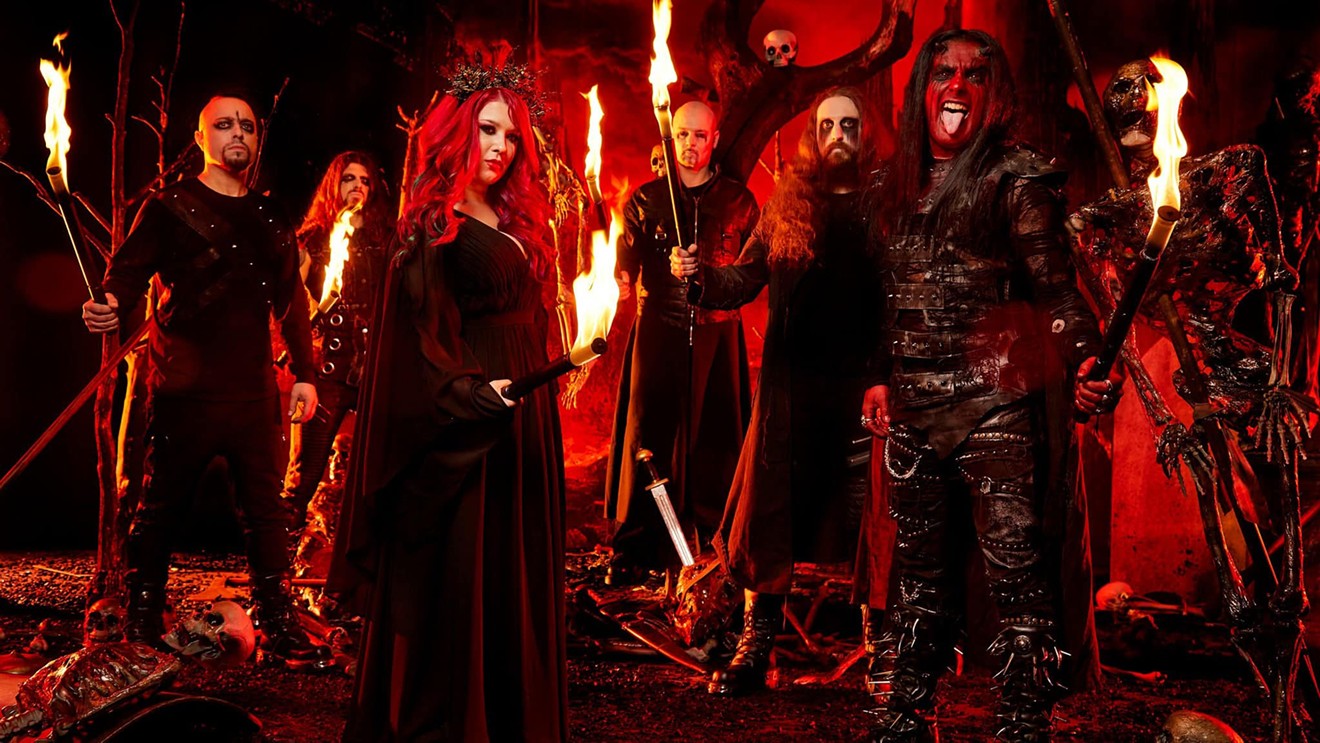 Cradle of Filth is back in the states supporting Danzig, including the Denver concert Tuesday, May 10, at the Mission Ballroom. James Sharrock
What keeps Cradle of Filth frontman Dani Filth and his bandmates going after thirty years?

“Well, I mean, it’s our jobs. That’s an easy one," Filth answers. "We love doing it, obviously. I love being in a band more than ever.”

Filth was in Los Angeles, waiting for the rest of his bandmates to arrive stateside before heading to practice. The pandemic has made a mess of international travel and touring, but Filth chalked it up to a new occupational hazard, like “dodging bullets” or “walking a minefield.”

“This fucking COVID thing is doing my head in, it really is,” he admits, adding that Cradle of Filth was fortunate to tour the U.S. last year. “We had to jump through so many hoops. Honestly, it was so difficult.”

But England’s symphonic black metallers are back in America supporting Danzig. The tour stops in Denver on Tuesday, May 10, at the Mission Ballroom. Crobot and Necrofier are also opening. Aside from the Danzig dates, Cradle of Filth has some headlining shows planned in to promote the band’s new record, Existence Is Futile. As a fan of Danzig, Filth is excited for the tour, especially since Cradle of Filth typically hasn’t opened for many acts during its career.

“It’s different. It’s very refreshing. We haven’t gone out in support of a band like Danzig in years. I think this is probably, aside from festivals, only the second time we’ve supported in our entire career,” he says.

With thirteen studio albums, picking a set list “gets harder every album, because you want to try to commit to playing stuff from the new album. Then you also have got to play fan favorites and a plethora of songs that sum up your career instead of dwelling on one particular epoch,” Filth explains.

“Put it this way: It’s not going to get any easier as time goes on,” he adds. “There’s a couple of new songs and a couple songs that we haven’t played in a long while. There are a few surprises, but I’ll leave that until people actually get to see us.”

“By definition alone, [shock rock] would pertain to us, but it was never a point of reference. It was never something that we would endeavor to go out and do primarily,” Filth says. “Some days we got out alongside the proverbial grave, and we might have thrown out a few ‘fucks’ or ‘cunts’ here or there. But that’s just because we play in an extreme metal band. The whole premise of it is you do what you want when you want to do it. It would be so easy and very contrived, as well, to spend your entire career trying to shock people again and again and again.”

Filth adds that music and going to concerts offer an escape more than anything, especially nowadays, when one doesn’t need to look too hard to find real-life horrors of death and destruction.

“I don’t think the world is that shockable now. I mean, fucking hell, we got Armageddon after Armageddon following one another. Now we've got Ukrainian war and the threat of nuclear extinction hanging over everybody’s heads yet again. Everything else really pales in comparison to the horrors that people are enduring in the Ukraine, and Russia, as well,” he says.

The new album reflects some of that reality, too, and with a title like Existence Is Futile, it feels damn near prophetic.

“We’re not one of those bands that generally talks about skyscrapers and sports cars. Maybe that’s where we’re going wrong,” Filth says with a laugh. “But I would say that this album felt like it needed to have a little bit more modernity to it, because otherwise people can’t relate.”

Cradle of Filth plays the Mission Ballroom, 4242 Wynkoop Street, at 6 p.m. Tuesday, May 10. Tickets are $49-$100.
KEEP WESTWORD FREE... Since we started Westword, it has been defined as the free, independent voice of Denver, and we'd like to keep it that way. With local media under siege, it's more important than ever for us to rally support behind funding our local journalism. You can help by participating in our "I Support" program, allowing us to keep offering readers access to our incisive coverage of local news, food and culture with no paywalls.
Make a one-time donation today for as little as $1.