Dazzle will leave its current home for the Denver Performing Arts Complex. Danielle Lirette
Denver and Dazzle will soon be making some beautiful music together.

Sometime in late November, Dazzle will pack up and leave its current home downtown, moving just two blocks away to 1080 14th Street, where it will become a tenant of the Denver Performing Arts Complex in a decade-long lease with Denver Arts & Venues, which operates the city-owned complex.

At a time when many venues are struggling and some have given up altogether, including iconic jazz club El Chapultepec, this deal sounds particularly sweet.

Dazzle got its start 25 years ago, when Karen Storck and Miles Snyder opened a restaurant/bar at 930 Lincoln Street, in the former home of Fuji En, a Japanese restaurant. While it didn't present live music, Snyder created a soundtrack for Dazzle with jazz CDs from his extensive home music collection.

In 2001, Donald Rossa, who'd previously worked for the Fourth Story, Piatti and Sfuzzi restaurants, was brought in as a managing partner. Dazzle quickly became a favorite spot for happy hours and late-night gatherings (since it was just a block from the Westword office, we were regulars), but that September 11, as news came in of the terrorist acts on the East Coast, the scene was much more somber. That’s when Rossa decided that Dazzle needed to start hosting live jazz.

“I said, ‘We’re going to celebrate being American, and our original art form is jazz,'” he told Westword in January, when Dazzle officially celebrated its 25th anniversary. “And Miles said he was on board with it, because Miles taught me about jazz. I didn't know anything about it. I was a rocker.”

Rossa reached out to renowned local trumpeter Bob Montgomery, who gave him a list of phone numbers for other local jazz musicians. Initially, Dazzle hosted live jazz four nights a week in its bar area; over the next year, another stage was added in its second room, and the venue expanded its live-music program to every night of the week.

Rossa became the sole owner of Dazzle in 2003; soon afterward, he interviewed El Paso transplant Matt Ruff for the position of general manager during a performance by the Future Jazz Project. “I remember being blown away by the band, but also by the venue,” says Ruff, who's now also a partner in Dazzle, along with Austin Andres and Jan Cleveland.

A rendering of the new bar at Dazzle.
Perkins & Will
But a decade later, the physical limitations of that venue were beginning to cramp Dazzle's style. Around the same time, David Spira, who'd bought the circa 1891 Baur’s Building at 1512 Curtis Street in 2004, was closing Baur’s Listening Lounge, which he’d run since 2015. Spira invited Rossa to look at the space, and within two months, they made a deal. Dazzle moved downtown in May 2017.

This space came with its own challenge, however. While the Golden Triangle spot had been more of a neighborhood bar, the new Dazzle was more of a destination — with much more space, including a huge kitchen. And just as they were working out the kinks and beginning to again make a profit, the pandemic hit.

The community helped keep Dazzle afloat, Rossa recalls, whether it was by raising $40,000 for employees through a GoFundMe page, or getting a grant from the Live Music Society. But Dazzle also helped the community with its Bread & Jam program, a setup through which local musicians could get a free meal and food items from its pantry. When it couldn't put on live shows, Dazzle offered virtual concerts and other programs. And when Dazzle was again named Best Jazz Club in the Best of Denver 2021, that award was particularly heartfelt.

“We took care of a lot of people that just didn't have money,” Rossa recalls. “I hope it brought the community that much tighter together. I think that's what this industry is all about.” 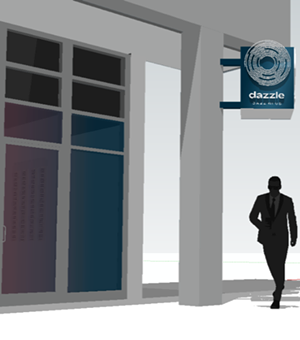 The new entrance and new logo from ArtHouse Design.
Dazzle

And now Dazzle will be even tighter with the city's cultural community. Through the summer, it's collaborated with Denver Arts & Venues on programming at the Galleria, offering a taste of what could be coming late this year, even though the deal wasn't announced until August 13.

Work is already underway on the space, which most recently was home to the controversial Onyx Ultra Lounge, which lost its lease with the city in 2019. The green room is in place, and construction of the stage — a more intimate setting than at Baur's, with great sightlines — has begun. There will be a bar where people can gather for cocktails and conversation (with all the restaurants nearby, a kitchen isn't a priority), as well as a piano lounge tucked into a corner.

Until it moves into the new space — the exact date depends on permitting and the construction schedule — Dazzle at Baur's will continue to offer its usual lineup (see it here). In its new home, Dazzle will be able to present even more music, with a dozen shows a week in the club itself and bigger concerts in other theatrical spaces in the Denver Performing Arts Complex. While it will be able to take advantage of Denver Arts & Venues marketing, Dazzle will remain independent.

"Dazzle's record of success is a terrific complement to programming at the arts complex," says Ginger White, executive director of Denver Arts & Venues. "We're all excited about the unique twist Dazzle can provide to our neighborhood's cultural life."

"Dazzle is our gift to Denver," says Rossa. "We're grateful to the live-music lovers for entrusting us to run these music programs for so long. As we look to the next ten years, moving Dazzle to the Denver Performing Arts Complex allows us to provide greater musical performance opportunities and continue to support local musicians."

Music to our ears.

Editor's note: This piece includes some of Jon Solomon's 25th-anniversary salute to Dazzle.
KEEP WESTWORD FREE... Since we started Westword, it has been defined as the free, independent voice of Denver, and we'd like to keep it that way. With local media under siege, it's more important than ever for us to rally support behind funding our local journalism. You can help by participating in our "I Support" program, allowing us to keep offering readers access to our incisive coverage of local news, food and culture with no paywalls.
Make a one-time donation today for as little as $1.