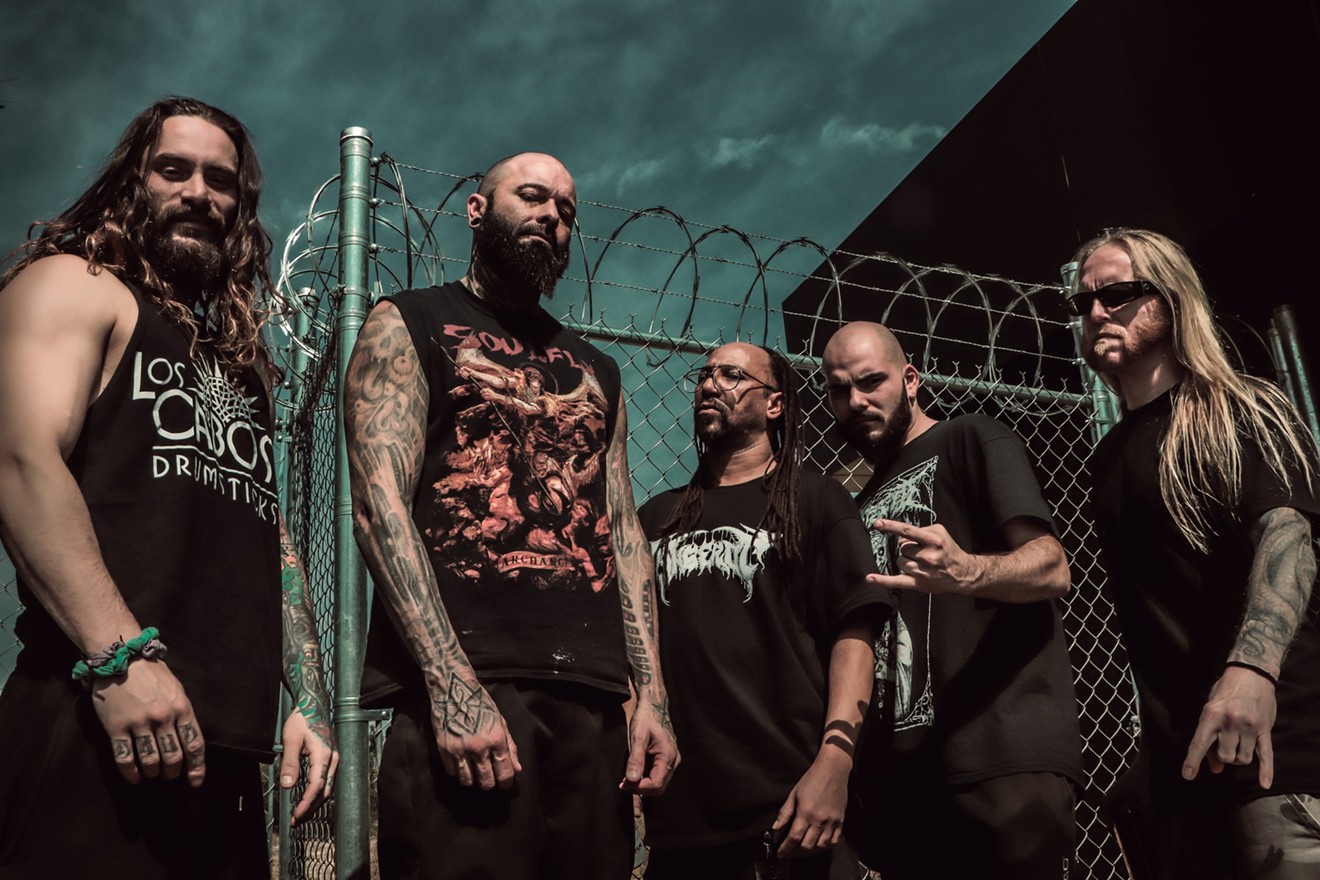 New York City's Suffocation continue to do what they do best. Courtesy Suffocation
The Industrial Revolution isn’t the first thing that comes to mind when listening to New York death-metal legends Suffocation. But the band, which has become synonymous with inventing “slams” and incorporating brutish breakdowns in the 1990s, holds the patent on a musical style that has since influenced and spawned numerous slam and deathcore outfits.

After thirty years, bassist Derek Boyer facetiously likens Suffocation’s impact on extreme music to that of history’s most notable transportation tycoons. “You think that when Henry Ford built the first car and the Wright brothers built their first airplanes, they thought it would be going to this level of progression, you know?” he says with a chuckle.

Cross-pollinating with New York City’s healthy hardcore scene at the time, Suffocation brought brutality to a new level and separated the burgeoning East Coast sound from the gore-drenched Florida bands that were rising to prominence out of Tampa.

“New York being such a hardcore environment yielded hardcore music and aggressive rap, and the metal bands that were coming out in New York had a different hard edge. Florida, it’s sunny, and these bands were playing fast, sick, evil, gory, whatever. And New York was just pissed. It just had something aggressive about being there that made their music the way it came out. It's gray and dismal, and so I think they just wrote with a really different vibe,” says Boyer, who joined Suffocation full-time in 2004, after the band officially reunited a year earlier.

Suffocation is teaming up with Atheist, Soreption and Contrarian for the Forces of Hostility tour, which stops in Denver on Wednesday, June 1, at the Roxy Theatre.

Chatting while Suffocation made its way to Chicago less than a week into the run, Boyer says the shows have been going great and promises that “we'll smash it” for anyone on the fence about coming out.

“Well, I mean, it's going to be super-aggressive and well put-together — we're not trying to just do run-on sentences. We're trying to think things through,” he adds. “We want to have dynamics, so when our slam comes, it's a big sight and a big buildup. There's more to it than just slam, slam, slam, but it's definitely slamming.”

The band has gone through several lineup changes through the years, including bringing in Ricky Myers after original vocalist Frank Mullen stepped away in 2019. It currently consists of Boyer, Myers, longtime lead guitarist Terrance Hobbs, rhythm player Charlie Errigo and drummer Eric Morotti. The lineup, minus Myers, put out …Of the Dark Light in 2017.

“New blood and new energy are always so welcomed. You know, when Charlie joined the band [in 2016] —  he's younger and he's doing backflips, running around. He's so energetic. We love the guy,” Boyer explains. “And it does breathe new life into you as well. Eric is doing so sick. Ricky’s doing great. We really do have a good thing. So it's a matter of just getting everybody on the same page, on the same wavelength and tearing it up.”

The current incarnation used the pandemic downtime to work on a new album, Boyer adds, and it’s set to be released next year.

“The new record is about three-quarters of the way done. It’s coming out real sick, all your typical Suffo slams and technical, thought-out stuff. But something a little new in there. And I'm not saying we got a flute player or got clean vocals or synthesizer, none of that shit. You know, we're sticking to the true, true roots of Suffocation. But there's something unique and new in there that is really cool,” he says. “We heard it and were like, ‘Wow, that's fucked up.' It's awesome. ... I can say it's a 2023 release on Nuclear Blast, and it's going to rip everybody's faces up. It's going to be killer.”

As originators of death metal's first wave, Boyer and Suffocation are also enjoying the recent resurgence in what is now being called “old school” death metal, particularly the newer bands that are putting a different twist on it and bringing the music to a younger audience.

“We can mix and mingle with some of these new bands, because the new bands are just drawing huge crowds, and everybody's pumping their fists and singing the songs. We're like, ‘Wow, this is a massive thing,'” he says. “You do have the parents that knew Suffocation bringing their kids to the shows — we're seeing that second generation of kids out at the shows. But there's also that new thing going on, so we're just waiting to see what happens. This is interesting.”

Suffocation plays the Roxy Theatre, 2549 Welton Street, at 7 p.m. Wednesday, June 1. Tickets are $22.
KEEP WESTWORD FREE... Since we started Westword, it has been defined as the free, independent voice of Denver, and we'd like to keep it that way. With local media under siege, it's more important than ever for us to rally support behind funding our local journalism. You can help by participating in our "I Support" program, allowing us to keep offering readers access to our incisive coverage of local news, food and culture with no paywalls.
Make a one-time donation today for as little as $1.