Album artwork for comedy-rock band Bolonium's latest record. Bolonium
Devo co-founder Mark Mothersbaugh spent two weeks of 2020 in the ICU, brought low by a bad case of COVID-19. During part of the ordeal, he told the Los Angeles Times, he lay strapped to a bed, haunted by paranoid delusions — believing, among other things, that some kids had captured him and sold him to the hospital, and that he'd been assaulted at a Little Tokyo bookstore where he shops for stationery.

Denver band Bolonium possesses a definite spiritual connection to Devo, and the local act's latest record, Full of It, would make an excellent soundtrack should Mothersbaugh's coronavirus hallucinations ever be committed to celluloid.

That notion is "a huge compliment,” says guitarist and vocalist Tim Johnson.

“It really is,” agrees Richard Taylor, who sings and plays the accordion. “We are huge Devo fans, so anything Devo-related is pretty amazing. I heard about that, too. I hoped he was okay, but I think he's fine now.”

Johnson and Taylor, old film-school buddies and accomplished movie makers, are joined by Bonnie Finley on drums and Paul Day on bass; together they envisioned the new record, a followup to 2019’s Snacktacular, as coming from a post-apocalyptic place, and with 2020 sucking as bad as it did, their theme couldn't have been more timely. Taylor says the bleak historic moment inspired them to delve even deeper into the muck of their collective subconscious.

It comes as no surprise, then that the new album is not as overtly joke-laden as its predecessor. According to Johnson and Taylor, the songs are more mature, and the band may have arrived at a fully congealed sound from which to proceed in the future. Still, it’s not the easiest listen.

“At first you'll hate us,” Taylor boasts during a freewheeling phone interview, and he's not entirely wrong. But the songs tend to grab the listener a couple of tracks into the album.

“We kind of threw all the rules that we had for ourselves out the window,” says Johnson. “We just wanted to see what we could create. With times being the way they are, that kind of influenced us to make something a little darker, a little weirder.”

The bandmates had previously written songs with an eye toward performing them live — and the band is fun to watch in person. (Anyone who doesn’t appreciate a man with an accordion has no soul, as far as I’m concerned.) Bolonium has also made hilarious music videos, such as the unnerving series the group produced for the tracks on Snacktacular.

As for writing new material, “We just kind of wanted to see where the muse took us,” Johnson says. “It kind of ended up having a theme of nostalgia and thinking about how things used to be, and just being in this strange, dystopian world that we don’t really know how to navigate.” 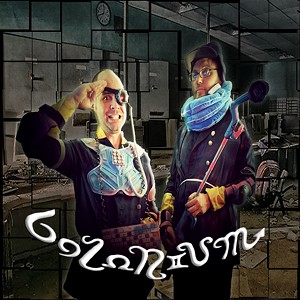 Perhaps because Johnson and Taylor are filmmakers, Bolonium focuses on how its videos look as much as on how the music sounds. For Full of It, the band went with the apocalyptic theme, viewing its members as soldiers at the end of the world. Those “soldiers” appear in the video for the new song “Jiggowatts,” two minutes of footage so psychedelic, you might think you remember seeing it on the wall of your high school gymnasium during an acid trip.

“We’ve got a lot more footage of us in those costumes. We're doing different things that are going to supplement some of the other songs,” Johnson teases. “If you're confused, that’s good, because that’s what we were going for.”

“We were a little too in-your-face on our last [album],” Taylor says, so they decided to "just kind of confuse people this time around. We want to be a little more mysterious and psychedelic.”

The album was recorded remotely instead of the bandmembers getting together in a studio, and Full of It is full of happy little accidents. Johnson, who has an affinity for sound collage, enjoyed the approach.

“There’s something about being together in the room,” Taylor acknowledges, “but just being able to get weird and come up with little 'whatevers' — I think we came out with a cooler album working that way.”

In 2020, all the dystopian literature and movies that nerds have loved for decades seemed to start dripping into reality. It was also isolating for many people who were trapped at home. Johnson says that aside from worrying about the welfare of his friends and family, he didn’t mind being alone all that much.

“I’m a little anti-social anyway,” he admits. “I hate to say it, but I was kind of in my element being isolated, and didn’t mind for the first time in my life that I didn’t have to make excuses for making music. It was like, ‘Well, there is literally nothing else to do.’”

Taylor adds that 2020 took away the need to shmooze, mingle or prove himself since he was stuck inside, and it had a measurable impact on the new songs.

“A lot of the lyrics we wrote this time around, I don’t feel like we would have written those lyrics if the pandemic hadn’t happened,” he says. “We don’t care anymore. … It forced us to be ourselves and to get away from ourselves a little, too. I think we had gotten too full of ourselves.”

Hear Full of It on Bolonium's Bandcamp page.
KEEP WESTWORD FREE... Since we started Westword, it has been defined as the free, independent voice of Denver, and we'd like to keep it that way. With local media under siege, it's more important than ever for us to rally support behind funding our local journalism. You can help by participating in our "I Support" program, allowing us to keep offering readers access to our incisive coverage of local news, food and culture with no paywalls.
Make a one-time donation today for as little as $1.