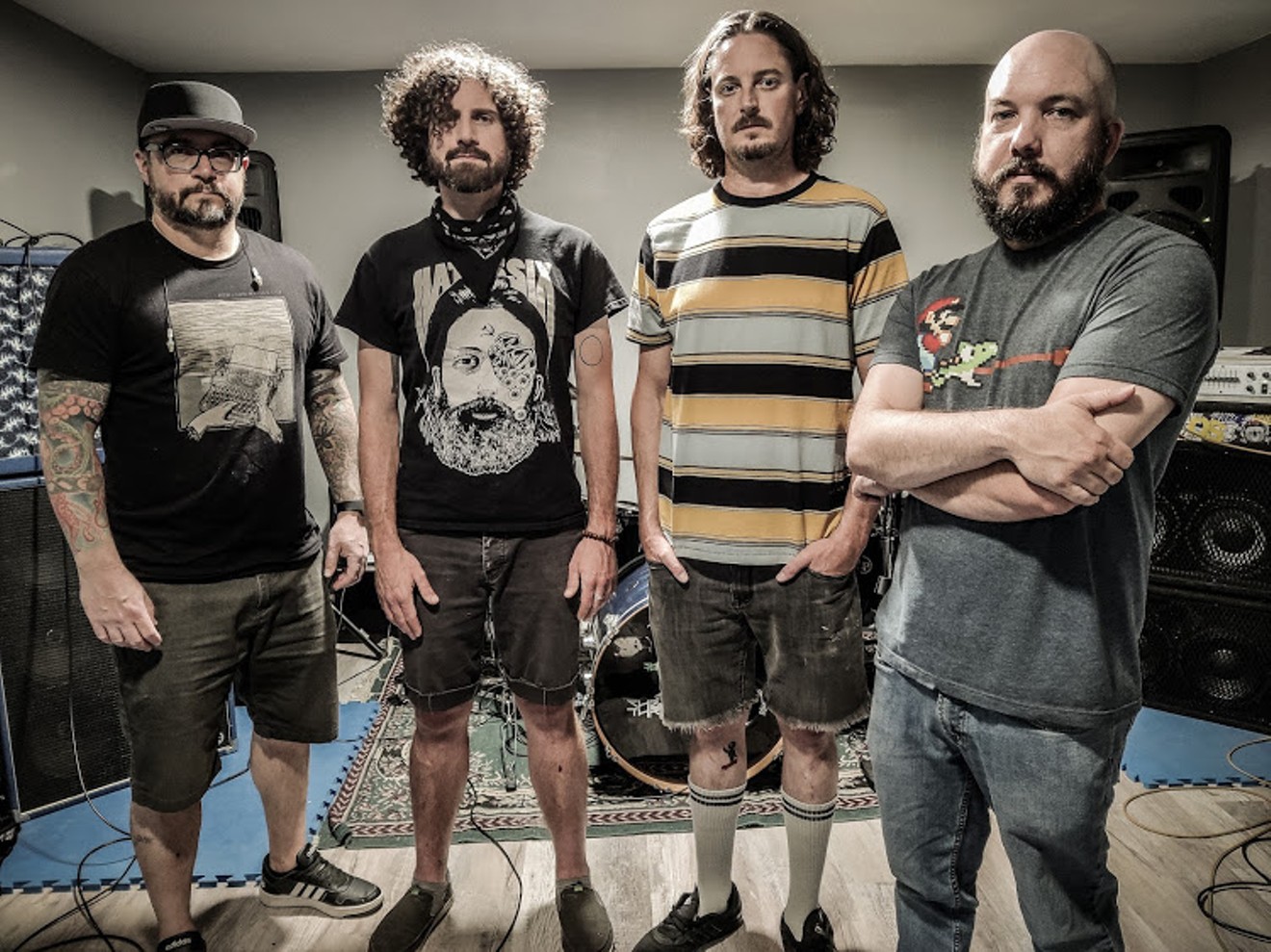 Chew Thru was just about to start playing out regularly when the pandemic hit. Now the band is back, with a positive message. Chew Thru
If it was up to Chew Thru vocalist Matt Lamoureaux, he’d still be in his last band, The Lurchers.

“I really liked that band,” he says. “I was really happy. I’ve never felt so good on stage than playing with those dudes, and the response we got was so awesome.”

After playing metal for a long time, Lamoureaux says, fronting the Lurchers — a punk outfit — was a welcome change.

“I’ve always been into punk, but none of my past bands were really like that, because my friends weren’t really as into it as me. They’re all metal heads, so it was my chance to actually do what I wanted to do and not have to worry about anyone else.”

Unfortunately, some of Lamoureaux’s bandmates were also following their own paths and not worrying about anyone else, and the Lurchers didn’t last. But out of the ashes came Chew Thru.

“It was addiction that ended that band,” says Lamoureaux of the Lurchers. “Some of the members got into drugs. I’m a family man. I’ve got a daughter, mortgage, full-time job. So I put this band together on the side, just knowing the other one was about to fold.”

That decision turned out to be a solid one. For Chew Thru, Lamoureaux says, he sought out reliable players, fellow family men who share his love of aggressive, up-tempo punk and relatively clean living.

“I just wanted some dudes I could trust, that are as motivated as me,” he says. “I’m not straight-edge, but I like the message and the music, the faster tempo. This is exactly what we wanted to do, and these dudes, we all clicked really good.”

Lamoreaux has certainly been open to different sounds, having tried his hand at a good mix of musical styles from rap to rock. But it’s hardcore punk that he says has both the energy and message that he relates to best and is the driving force behind Chew Thru.

“I guess the underlying theme I try to have is motivation,” says Lamoureaux. “I’m basically trying to spark myself to act and move for causes, just trying to motivate myself, keep those tempos fast, and keep driving myself and hopefully drive others with a message of positivity. On the other hand, I’m pissed off about a lot of things, too.”

One of those things is losing his job as a graphic designer for Kroger, the grocery chain. It was a hard hit for the 43-year-old singer, who has a wife and teenage daughter to support, and was the impetus behind the Chew Thru song “Fake Smiles.”
click to enlarge 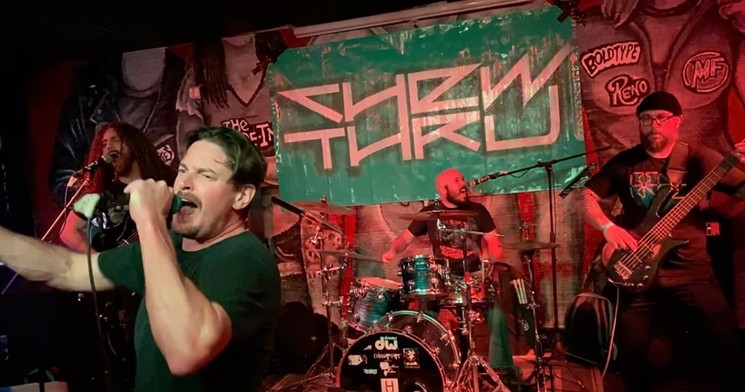 Despite losing his job right before the pandemic hit, Chew Thru singer Matt Lamoureaux has kept a positive attitude.
Christan Lamoureaux
“They laid my whole department off — just chopped us off and gave all our jobs to an outside company,” says Lamoreaux. “We had to train the people that took our jobs how to do our jobs. They laid us off, and we still had like three months of just sitting there, marinating in the shit.”

Walking away wasn’t an option, he said, because leaving would have hit his finances even harder.

On top of the work struggles, he says, getting older has occasionally put a damper on the good times. An avid BMX rider and skateboarder, Lamoreaux has been plagued by injuries.

“I’m at a crossroads,” he says. “Like maybe I should just quit that shit and get a road bike, get a longboard. It’s harder and harder. My body’s been through crazy shit. I go to the skatepark every Saturday and Sunday, and now I’m just getting so much more wrecked than I did when I was younger. It takes so much more time to recover. It’s a hard time, coming to grips.”

Despite the tribulations of getting older, Lamoureaux says he’s tried to keep Chew Thru’s message constructive.

“I’ve always tried to keep it positive, for the most part, unless I’ve got a gripe, which is that punk rock in me to just bitch about something, but trying to change it,” he says. "I’m not just complaining with no forward direction. I want to at least have an idea of how to fix it, or how we can make things better. But honestly, it’s mostly just personal, to try to drive myself, to keep pushing.”

Sometimes, though, no matter how hard a band works, the universe just seems to keep throwing up roadblocks. Chew Thru was planning a record-release show for its EP Heavy Hands. Then everything, everywhere, fell apart.

“The pandemic was rough for us,” says Lamoureaux. “Before COVID, good things were happening for us real fast, and now it's like we have to start over.”

It took a while, he recalls, for everyone in the band to feel comfortable getting together at all, especially with the uncertainty of what the future held.

“Venues were closing left and right,” he says, “so it seemed that when the world did open back up, it would be much more difficult to get good shows.”

In May, with a glimmer of hope that the end of the pandemic was in sight, Lamoureaux began to fire off emails to every promoter and venue he could think of in hopes of getting a gig, and he got a pretty quick offer to play at HQ, the former site of 3 Kings Tavern, which closed permanently a year prior after fourteen years on South Broadway.

“We jumped on it,” he says. “I can't tell you how great it feels to finally get back out.”

Apart from the satisfaction of re-emerging on stage after such a long and dreadful lapse, Lamoureaux says he finally feels at home with the music Chew Thru is making.

“People were like, ‘You’re a hardcore singer. Why are you singing for this rock band?’” says Lamoureaux of his time with the Lurchers. “That was always me. I was just in the wrong place. This is my first hardcore band, but it’s always what I was.”

Chew Thru plays at 7:30 p.m. on Saturday, July 17, at HQ, 60 South Broadway. For tickets and more information, visit HQ online.
KEEP WESTWORD FREE... Since we started Westword, it has been defined as the free, independent voice of Denver, and we'd like to keep it that way. With local media under siege, it's more important than ever for us to rally support behind funding our local journalism. You can help by participating in our "I Support" program, allowing us to keep offering readers access to our incisive coverage of local news, food and culture with no paywalls.
Make a one-time donation today for as little as $1.