Chompsky the turtle terrorizes a fictional city in "Alligatron." via youtube
The Henderson-based band Holophrase created the video for "Alligatron" on a tight budget, with a homemade set, thrift-store costumes and some simple green-screen magic. Well, the screen wasn't green. It was pink.

"We actually had to make a pink screen for the turtle, because he's green, so that's why the video has a pinkish hue in places," says vocalist and songwriter Malgorzata Stacha. The scenes have a soft, magenta tinge and show Stacha playing several roles, including a news anchor, a politician, a cop and a construction worker, characters that interact with the reptile as he terrorizes a cardboard city made by Stacha and bandmate Luis Etscheid.
The star of the video, Chompsky the Turtle, was found in the band's back yard; his existence inspired the monster-movie destruction scenes. Much like the intriguing and disjointed feel of Holophrase's music, "Alligatron" is open to analysis.

"A lot of the scenes in the video are up for interpretation; we were focused on the entertainment value," says Stacha. "My approach (in writing) that song was the weird feeling of transplanting yourself from one place to the other. For me, it was from Poland to the U.S. The feelings and confusion of that experience ended up in the song. In many ways, "Alligatron" is about the experience of finding a new place — like a new planet, almost, and how it can be weird." 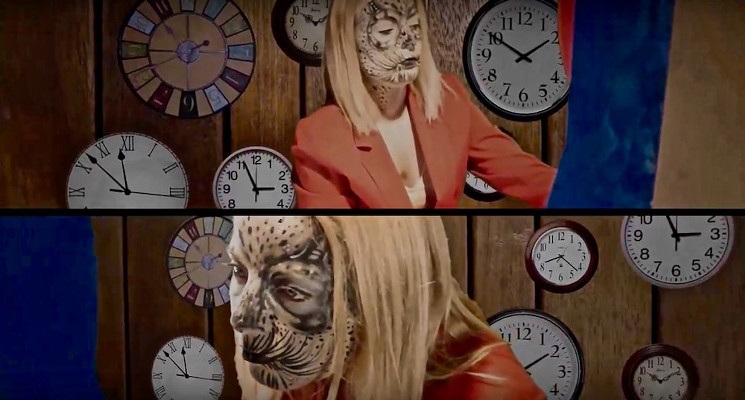 Holophrase's Malgorzata Stacha plays many roles in the band's new video, "Alligatron."
via YouTube
The "kind of confusing, kind of enigmatic" feelings the singer uses to describe the tone of the video come across as scenes jump from a news desk to the city streets, where Stacha's characters find themselves running from and fighting against the massive turtle. Her satirical presentations of a pantsuited politician and a disheveled talking head lend a satirical take on the often performative nature of politics and the 24-hour news cycle.

Stacha recommends listening to "Alligatron " — which is off of Holophrase's late-2016 release, Stay Being — separately from the video, as they should be viewed as two completely different works of art.

Catch Holophrase live at Lost Lake Lounge this Sunday, April 2, with Nasty Nachos, Freaky North, X Taeogi and Futurebabes. Tickets are $8 to $10 and can be purchased through the venue's website. To hear more from Holophrase, visit the act's Bandcamp page.

Bree Davies is a multimedia journalist, artist advocate and community organizer born and raised in Denver. Rooted in the world of Do-It-Yourself arts and music, Davies co-founded Titwrench experimental music festival, is host of the local music and comedy show Sounds on 29th on CPT12 Colorado Public Television and is creator and host of the civic and social issue-focused podcast, Hello? Denver? Are You Still There? Her work is centered on a passionate advocacy for all ages, accessible, inclusive, non-commercial and autonomous DIY art spaces and music venues in Denver.
Contact: Bree Davies
Follow:
Twitter: @cocodavies