Local 46, which closed in October, will reopen for a few months before moving to a new location and taking on a new name. Sarah McGill
Big moves are afoot for Local 46 Bar and Biergarten — including a new location and a name change.

After nearly a decade at 4586 Tennyson Street, the bar closed last October as COVID-19 raged; owners Niya and Grant Gingerich said they were unable to face what the winter months would mean to a place with limited capacity and an emphasis on outdoor gatherings.

The business was already on shaky ground, as the landlord had requested a certificate of demolition for the building; the owner had plans to sell the property to a developer, who ended up backing out of the deal, says Niya Gingerich. Since the sale fell through, the landlord offered the Gingeriches a short-term lease for the summer months.

Gingerich says that the landlord has been extremely gracious, letting them keep furnishings, restaurant equipment and other items in the location since the business has been closed. Soon they'll start unpacking it all, with a goal of reopening Local 46 by the end of April. This summer will mark what would have been the last season on a ten-year lease.

As in previous summers, Gingerich says that Local 46 will host outdoor concerts this year.

The short-term lease over the summer will give the Gingeriches time to transition to their new location, dubbed Local 38, at 3930 West 38th Avenue, which has been vacant since El Chapultepec Too closed there in 2014. The Gingeriches are co-owners of the property with Christian Thompson, owner of Green Door Living, and Kris Miller, owner of KLM Construction. 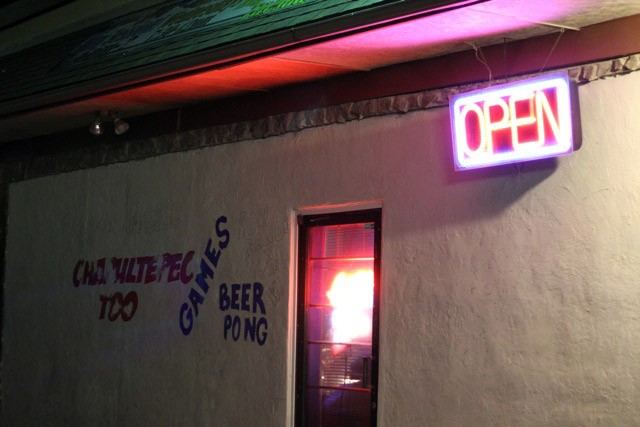 Local 38 will move into the former El Chapultepec Too location.
Jon Solomon
While Denver’s Board of Adjustments approved an outdoor biergarten for Local 38, it denied approval for live music outdoors. So instead, Gingerich says, they'll apply for a cabaret license in order to host live music inside.

“We'll hopefully get approval for that," she says. "We feel pretty confident that we'll get it, just because it was a live-music venue for so many years."

With Local 38, Gingerich says the couple wants to pick up where they leave off with Local 46.

“We feel like over the last nine years, we've had it pretty set how it was working really well for the community and for our staff,” Gingerich says. “We want to re-create that as much as possible."

They are also looking forward to the perks of owning their own building.

“It'll be easier for us to put in a bigger investment in our sound system and the not-fun behind-the-scenes stuff that make operations easier," she explains. "Otherwise, the vibe is going to be the same: taking an old dive bar and putting a little facelift on it, but kind of keeping that historic dive bar vibe [while] updating it and making it family-friendly and comfortable and clean.”

Although the venue Number Thirty Eight opened last October in RiNo, Gingerich doesn’t foresee much confusion between the names.

“It's a totally different vibe, and I think that we have such a big following that people know our brand and know our name,” she says. “So I don't think there'll be too much confusion, at least with all of our existing followers. But you know, it may cause a little bit of confusion for people who aren’t from this neighborhood.”
KEEP WESTWORD FREE... Since we started Westword, it has been defined as the free, independent voice of Denver, and we'd like to keep it that way. With local media under siege, it's more important than ever for us to rally support behind funding our local journalism. You can help by participating in our "I Support" program, allowing us to keep offering readers access to our incisive coverage of local news, food and culture with no paywalls.
Make a one-time donation today for as little as $1.