Bill Bass (right) at Reggae on the Rocks. courtesy Josh Timmermans
On January 13, Colorado lost one of its last true indie promoters.

Bill Bass — of Image Productions, Fey Concerts, Small Axe Concerts and Bill Bass Concerts —  died on a fishing trip in Mexico, just a week before the scheduled announcement of the on-sale for his iconic Reggae on the Rocks, and a few weeks out of the on-sale for multiple dates of Widespread Panic, also at Red Rocks this summer. He was 71.

In a nation now swept up in Swiftgate, it’s hard to remember the simpler days of concerts. Long ago (like the '80s), kids listened to the radio (go figure) to hear what bands were coming to town. Teenage fans in the tri-state area would mark their calendars for the on-sale date and start lining up at the box office, sometimes all night, waiting to spend their babysitting money to get a real, printed concert ticket. Jerri Thiel
Up until then, only Fey Concerts had been doing the big shows in the area. And then Bill Bass appeared on the scene. He was the first promoter to do an arena show that wasn’t booked by Barry Fey or Fey Concerts. "Bless Ian Copeland (FBI/Frontier Booking International), who came along and wanted, needed, someone else who could do shows besides the Barry Feys and the Bill Grahams,” remembers Doug Kauffman of Nobody In Particular Presents, the Ogden Theatre and the Lion’s Lair.

In a world without internet, Copeland somehow found Bass, and did the 1986 Smiths show at the CU Events Center with Bill Bass's Image. And shortly after that, Fey hired Bass.

“Bill was hired to run the small-show division for Fey. It was Barry, Pam [Moore] and Bill Bass when I started. Bill was there to develop the smaller acts, no question. Barry needed someone like him, honestly, to be able to compete with...well, Doug [Kauffman],” recalls Tracey Wiedeman, Styx/Foreigner tour manager who also worked for Fey Concerts.

Bass was a little weird for Fey, but he booked some really good shows for him.

“Although Bill was a bit crazy to deal with, credit where credit is due. He cared about doing his job and putting on good shows, and carved a niche. Although On the Rocks was something we started, Reggae on the Rocks did well,” says Pam Moore, a veteran of Fey Concerts and Vashon Island Partners.

In fact, Reggae on the Rocks, which Bass started in 1988, did really well.

But as the years wore on, frustration got the best of Bass, and he ended up quitting Fey, though he retained 50 percent ownership of Reggae on the Rocks in perpetuity.  He found a venue, Boulder's Fox Theatre, and started Small Axe in 1994. Courtesy David Mortimer
‘When we opened the Fox Theatre in 1992, our partner in the Fox, Dicke Sidman, who was very close with Bill, crafted a booking alliance through Bill and Fey Concerts. Bill worked really closely with me as I was just starting. He was probably the greatest teacher I could ever have,” recalls Don Strasburg of the Fox and AEG. "Imagine a boxing gym. He was tough as nails and beat the hell out of me on a regular basis. I would have to pull myself up off the mat and say, ‘Thank you, sir, may I have another?’ This sounds tough; however, Bill cared so deeply for our craft, and I think he promised Dicke he would make sure either I was ready for prime time — or I would quit."

Small Axe did the majority of the Fox lineup until the late ’90s, when a couple of bad shows ended that. But the Denver music scene hadn’t seen the last of Bass. He hung on to a couple of the bands that he'd helped start through Small Axe and came back as Bill Bass Concerts.

“Bill wanted to do the shows he liked. He loved reggae and jam bands. And metal. I mean, he was the first promoter to do Slayer in Colorado (and Megadeth!). And, of course, Widespread Panic,” says Mike Latronico, who worked for numerous promoters before becoming production manager for Bill Bass Concerts. 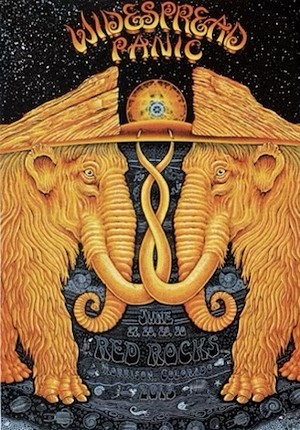 David Mortimer
"I truly can't imagine what Widespread Panic's career would look like had Bill Bass not been a part of our story. Bill supported the band long before we might have been considered a safe bet, introducing us to new territories far beyond Colorado," says John Bell of Widespread Panic. "His encouragement fueled us to believe in ourselves, the greatest gift a young band can receive. I'm sure countless numbers of musicians and industry folks share this fortune and blessing, thanks to Bill's love of music and celebration. I'll forever celebrate his memory with much love, laughter and gratitude. Thank you, sir."

"Bill saw the value in the band," adds Buck Williams, manager and agent for Widespread Panic. "I would call him because i needed dates filled in Shreveport or Santa Fe, and he would just do them. He believed in the band. But we believed in him, too. Which is why he did those shows in Shreveport and Milwaukee, which is why we stuck by him. He was a real friend."

“Widespread and Buck Williams have been really loyal to Bill. Buck and the band loved Bill. Well, we all did. Listen, the guy was from another planet. But he was good,” notes Chuck Morris, now the chairman emeritus of AEG Presents Rocky Mountains and director of the Music Business Program at Colorado State University.

Widespread Panic loved Bass, who was even known to sit in on drums at the band's Red Rocks shows. But then, Bass was already a drummer when he was living in New York City, working as a stage hand, before he moved to Colorado Springs forty years ago and started Image Productions.

"I knew Bill was a drummer," says Sunny Ortiz, Widespread Panic's drummer. We talked about it over the years — so, yeah, I finally called him up on stage. He gave me a look, like 'Don’t leave me,' so we played together. It was great. But then I couldn’t get him off the stage! Seriously, Bill was really great to us. He really believed in us, and he loved music.”

“I did 24 Widespread shows with Bill, but Bill’s done ’em all. Count is what — 67 at Red Rocks? Jesus!,” says Jason Miller of Live Nation and House of Blues.

To do one show at Red Rocks as an indie promoter is intimidating. To be able to retain bands in a market controlled by AEG and Live Nation is a major feat. But it's not just about getting the bands and the dates. It's putting on thousands of shows in your lifetime, and doing it so well that an act will stick with you for 150 of them, as Widespread Panic has.

“He loved seeing the fans enjoy the music at his shows, and hopefully will be remembered for his many contributions to the live-music scene in Colorado,” adds Peter Olivo, the other partner at Bill Bass Concerts.

Bill Bass lived a life devoted to bringing live music to the people who loved it. And he did it well, until the day he died...as an indie.

A celebration of Bill Bass's life is in the planning stages; watch for updates here.
KEEP WESTWORD FREE... Since we started Westword, it has been defined as the free, independent voice of Denver, and we'd like to keep it that way. With local media under siege, it's more important than ever for us to rally support behind funding our local journalism. You can help by participating in our "I Support" program, allowing us to keep offering readers access to our incisive coverage of local news, food and culture with no paywalls.
Make a one-time donation today for as little as $1.
Jerri Theil