People to Watch 2023: Jami Duffy, Leader of the Band 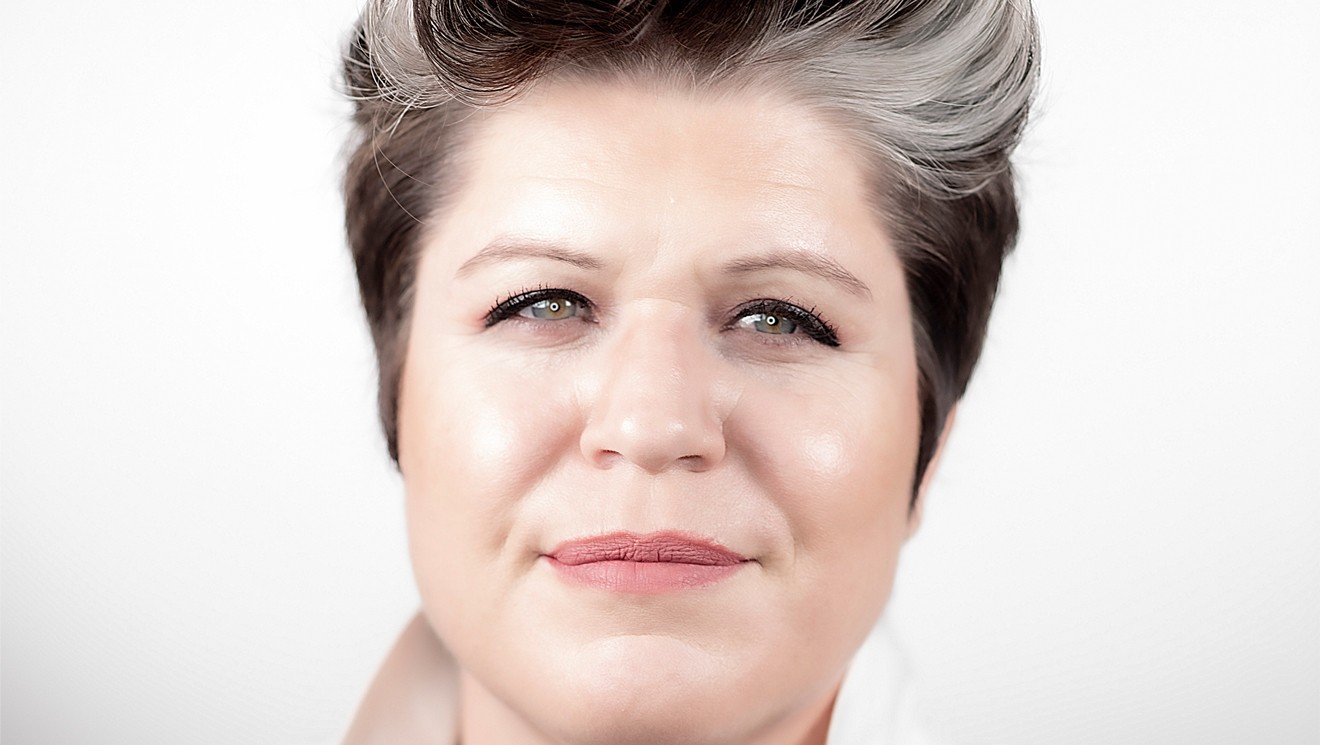 Jami Duffy is advocating for the community. Evan Semon
Jami Duffy considers herself "a little bit of a Robin Hood." After all, her job is to take money from donors and give it to those in need. The fifth-generation Coloradan is the executive director of Youth on Record, a nonprofit that teaches music and more to Denver youth and provides local creatives with the studio time and funding to make their dreams come true.

Duffy always knew her life's calling was to actively help others, but she wouldn't be where she is today if her original career plans hadn't been derailed. Raised in Castle Rock, she has community engagement running through her blood. Her paternal great-grandfather, Bernard Duffy, created the now-defunct Duffy's Shamrock Restaurant & Bar and the original Cherry Cricket, and also spearheaded the St. Patrick's Day parade in Denver. Her father is a chief at the Douglas County Sheriff's Department, and her mother has been working in child care for forty years.

"I was the first person in my immediate family to graduate from college. I went to the University of Denver and studied political science and journalism," Duffy says. "I really thought I would end up being an immigration lawyer, so I was on this path to go to law school. I graduated early from DU because I took the fullest course load possible. But I had always wanted to travel; I had only been on an airplane once. So I joined the Peace Corps and lived in Nicaragua for three years."

Duffy was still set on becoming an immigration lawyer when she returned, working with immigrant and refugee families in Summit County before taking a job at DU coordinating programs for social justice, creativity and entrepreneurship. In the meantime, she was trying to get a full ride to law school. "When you come from a working-class family, if you don't get a scholarship, you don't go to school," she explains.

She was devastated when she didn't get the scholarship she needed, but a new opportunity soon arose. "My students were really comforting to me at that time," she recalls. "It was around the Obama election, and they introduced me to the Flobots' music. My students were so into this band that, as their advocate, I was like, 'I'm gonna find a way for you to meet this band.' And so I did."

Flobots, a Denver-based band known for its politically charged music and artful activism, had recently created the nonprofit Flobots.org. "They very quickly brought me on the board, and then made me their executive director," recalls Duffy, who was then just 28. "At the time, we were such a tiny organization. This was in 2010; we were about eighteen months old and had an operating budget of about $120,000 a year. I really wanted to focus on young creatives and the schools."

Together with then-co-executive director Laura Bond, Duffy explored the idea of employing musicians to teach music to Denver students. "We started recruiting local artists like Molina Speaks, Melissa Ivey and Seraphin Sanchez [now YOR's board interim vice president], and training them to go into the classrooms and teach," Duffy says. "We were in this tiny little space above the Meadowlark, and only had two full-time employees."

Under Duffy's leadership, Flobots.org became Youth on Record in 2012, and the nonprofit landed a deal with the Denver Housing Authority to build a 5,000-square-foot media studio at 1301 West Tenth Avenue, where students and local musicians make music today. Over the past decade, the organization has exploded, with an annual budget of $3.3 million and twenty employees who have full medical and retirement benefits as well as mental health stipends, paid cell phones, recording studio time and even gym memberships. "I'm really trying to create an ecosystem where artists can prosper and thrive and stay in our city," Duffy says, adding that like the students the group serves, the majority of the staff is BIPOC.

"One thing I'll say about us at Youth on Record: We persevere," she says. "Now we've got this beautiful youth media studio that we've been in for nine years with an outdoor stage. We have our recording studio. And there's our young, creative ecosystem — all of these programs for the young creatives to learn all the skills they need. Students say they love to come to us because it's a sense of community and friendships, they get to meet all these artists, and they get to be themselves. I mean, that's the number-one thing that kids say: 'I just got to be myself here.' This is where really young people could come and be themselves and find a home."

Youth on Record now operates programs at nine middle and high schools five days a week; students can also enter the program outside of school hours and receive class credit. Duffy is proud of how many current teachers at the nonprofit started off as Youth on Record students: "I am looking at, how do we stabilize artists so we can keep them here? And how do we prepare our artists with community issues so that they can be what I call 'impact artists'? If we can pair artists with critical community issues, I can find ways to really fund that," she notes.

Duffy is always looking at ways to expand Youth on Record's reach, most recently by buying into the Underground Music Showcase and becoming the minority owner, after being "the charitable partner years and years and years ago," she says. She hopes to make the annual event more friendly toward those with mobile disabilities; among her goals is to make Colorado the foremost state for people to attend concerts and enter the arts, in spite of any physical or economic challenge.

"I am, at my core, a community organizer and advocate," says Duffy. "That's who I was brought up to be; that's my North Star."

"Kourtny Garrett, Downtown Defender"
"Daniel and Luis Ramirez, Hosts With the Most"
"Nga Vương-Sandoval, Welcome Committee"
"Michael Gadlin, Arts Ambassador"
"Penelope Wong, Top Shef"
"Cole Chandler, Speaker for the House"
"Michael Spencer: Anchor Man"
"Robert Kenney, Power Broker"
"Scott Gilmore, Playground King"
KEEP WESTWORD FREE... Since we started Westword, it has been defined as the free, independent voice of Denver, and we'd like to keep it that way. With local media under siege, it's more important than ever for us to rally support behind funding our local journalism. You can help by participating in our "I Support" program, allowing us to keep offering readers access to our incisive coverage of local news, food and culture with no paywalls.
Make a one-time donation today for as little as $1.
Emily Ferguson is Westword's Culture Editor, covering Denver's flourishing arts and music scene. Before landing this position, she worked as an editor at local and national political publications and held some odd jobs suited to her odd personality, including selling grilled cheese sandwiches at music festivals and performing with fire. Emily also writes on the arts for the Wall Street Journal and is an oil painter in her free time.
Contact: Emily Ferguson