Join the Club: The 1900 Block of Market Street Is Seeing Plenty of Action

El Chapultepec closed, but four new venues have opened on the block. Jon Solomon
Since the day after Prohibition ended in 1933, El Chapultepec had held down the corner of 20th and Market streets. Under Jerry Krantz, who'd worked as a bartender there and inherited the place from his brother-in-law, Tony Romano, in 1968, the 'Pec earned a reputation as a world-class jazz club.

After Krantz passed in 2012, the building at 1962 Market was purchased by Shames Makovsky, a real estate venture, and his daughters continued to operate the club until they announced they were closing the business in December 2020.

Pandemic wasn't the culprit. Daughter Anna Diaz cited drunken Rockies fans disrupting shows and Denver’s explosive growth and safety issues as reasons. “Whether it's the tent city or the drunken mobs that are pouring out onto Market Street at two o'clock, it's just really taking a toll on us, and it's just that Denver's different than it used to be, and 20th and Market is different than it used to be," she said. 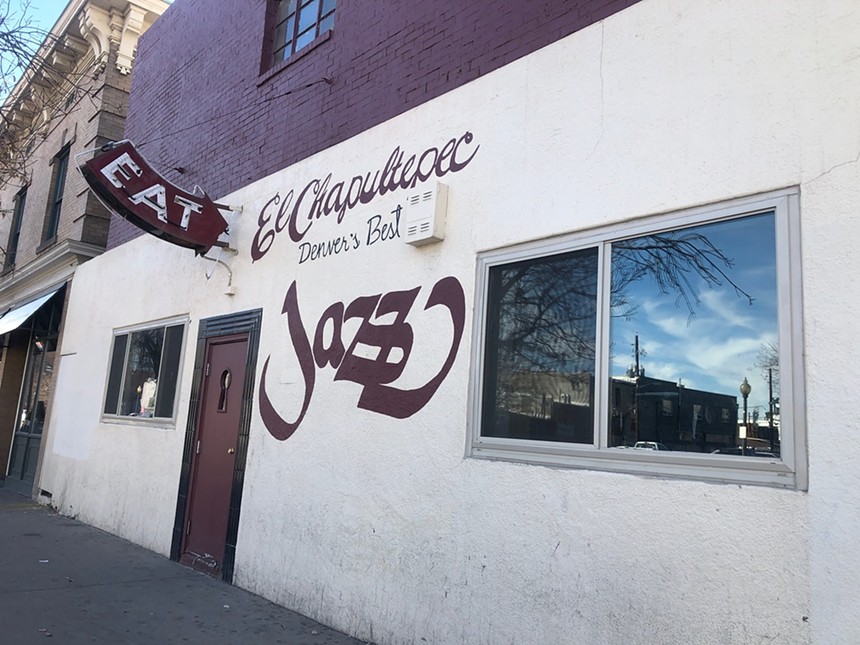 El Chapultepec closed for good in December 2020.
Jon Solomon
And the area continues to change. In March 2021, Valentes Corleons, the owner of Beta Event Center a block away, announced that he was taking over the El Chapultepec lease and would turn the place into a new venue called Cantina. But that plan evaporated last week, after the Corleons-operated Beta and the venue next door, Cabin Tap House, both lost their liquor licenses. "My American dream — dreaming all my life to bring beautiful venues to Denver —- it's over," Corleones told Westword.

And so were his plans for 1962 Market. "I put $771,000 into El Chapultepec, and it went down the drain. I did all the work, and the city didn't release my permit," Corleons said, adding that he'd given the keys for the building back to the landlord.

A representative for Shames Makovsky confirmed that the building is not currently under a lease, but declined to answer additional questions.

There have been plenty of other changes on the 1900 block of Market Street lately.

The brand-new Dierks Bentley's Whiskey Row.
Jon Solomon
On New Year's Eve, Dierks Bentley’s Whiskey Row opened next door to El Chapultepec at 1946 Market. The 22,000 square-foot venue incorporates the former home of Lodo’s Bar & Grill, a 6,000 square-foot addition and the historic home of Mattie's House of Mirrors, a legendary brothel when this part of town was known for a very different sort of entertainment from live music. Whiskey Row hosts shows five nights a week and DJs Thursdays through Sundays.

“I spend a lot of time in Colorado, so it was definitely the most fitting next spot for Whiskey Row,” Bentley said in a statement when his namesake club opened in Denver. “The neighborhood is a great vibe for experiencing Denver whether you’re a local or a tourist, and I can’t wait until I get to be back out there and have a cold one in the Mile High City at my very own place.”

El Tejano and Loaded opened last year in the former homes of Tavern Downtown and Cowboy Lounge.
Jon Solomon
A trio of other new venues opened across the street last year, headed by nationwide entertainment and hospitality group Knitting Factory Entertainment, Los Angeles’ Buckhead Group and San Francisco-based Fillmore Capital Partners. The three concepts — El Tejano, Loaded and Smash Face Brewing — fill 25,000 square feet of space in three building, as well as a 10,000 square-foot rooftop. Tavern Hospitality Group CEO and owner Frank Schultz had sold the Tavern Downtown and Cowboy Lounge, which occupied much of the space, to the group in 2019.

In October, El Tejano celebrated its grand opening in the former Tavern Downtown location at 1949 Market. The restaurant serves suchTex-Mex dishes as grilled Mexican street corn, Frito pie, tacos in all shapes and sizes, burritos, enchiladas and even carne asada tater tots; it also has a free, self-serve chips and salsa bar.

Loaded also opened in October, in the former Cowboy Bar space at 1941 Market. The club is modeled after brash, gritty rock-and-roll haunts in Lo Angeles, like Sunset Strip’s Viper Room, the Roxy and Whiskey A-Go-Go. The bar features themed evenings, including ‘80s night Wednesdays, ‘90s night Thursdays and Get Loaded weekends, as well as numerous other one-offs and recurring themes.

In addition to offices, the block is also home to Wine Cellar LoDo and Brothers Bar & Grill, which both opened more than a decade ago in 21,000 square-foot structure at 1920 Market that had been the setting forThe Real World: Denver in 2006. Now there's been action on that building, too.  According to BusinessDen, Magnetic Capital — which bought the building for $6.3 million in 2018 (it had sold for $3.3 million right after the Real World filming) — just sold it for $12 million.

Arizona-based Riot Hospitality Group, which partnered with Monfort Companies on Whiskey Row, are joining together on the project slated for this space; Brothers will move out when its lease ends this year. After major renovations and the creation of a rooftop bar, the new spot should open by mid-2023, according to the Denver Business Journal.

Now if a live-music venue would just move into the former El Chapultepec....
KEEP WESTWORD FREE... Since we started Westword, it has been defined as the free, independent voice of Denver, and we'd like to keep it that way. With local media under siege, it's more important than ever for us to rally support behind funding our local journalism. You can help by participating in our "I Support" program, allowing us to keep offering readers access to our incisive coverage of local news, food and culture with no paywalls.
Make a one-time donation today for as little as $1.