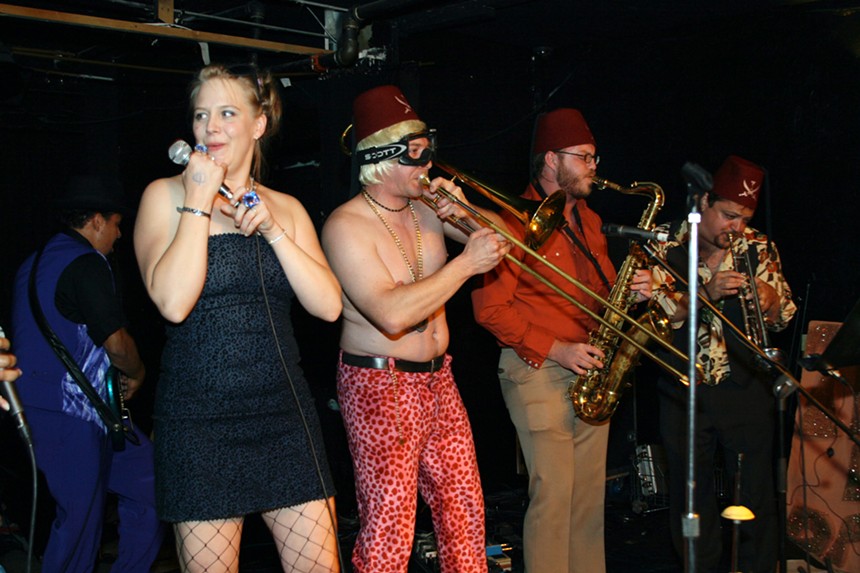 Jennifer Gelvin (left) and Keith Rouse (far right) of the Fabulous Boogienauts, seen here at 3 Kings Tavern in 2008.
Jon Solomon
Singer Jennifer Gelvin and trumpeter Keith Rouse met when both were members of the Denver disco band the Fabulous Boogienauts. The two weren't looking to be in a relationship, remembers bassist Rocky Ramjett (formerly known as David Rochlitz), who'd founded the band in 1997, "but it just happened."

Rouse eventually worked out a scheme to propose to Gelvin by telling her he’d found a treasure map. Ramjett figured that Gelvin would smell the ploy from a mile away.

“But she didn't,” Ramjett recalls. “I was really surprised she didn’t. They go in this cave and dig up this box, and there’s a wedding ring in it and he proposes to her, which is super-beautiful. And Jenn says, 'So there’s not any treasure?’”

The couple went on to have a daughter and a son — Jada, seventeen, and Jaz, fourteen. But in a tragic set of circumstances, both Rouse and Gelvin died last month, within a few weeks of each other. “They loved each other very much,” Ramjett says. “It was beautiful. They sing on the album Pleasure Bomb, and you can hear it.”

Keith Rouse
Rocky Ramjett
But Rouse suffered a fatal heart attack on September 6, while Gelvin was killed in a double murder on September 29.


Gelvin, 49, and Katherine Pivoda, 33, an English teacher at the University of Colorado Denver, were both stabbed to death, allegedly by Pivoda's estranged husband, Matthew Madden, in what has been characterized by police as a domestic violence incident. A GoFundMe page has been set up for the Rouse children.

Ramjett thinks that about seventy musicians were members of the Fabulous Boogienauts over the last 24 years. He and Gelvin were two of the originals. Rouse, a native of Owensboro, Kentucky, joined in 2002. He tried out after his boss saw a classified ad saying that the Boogienauts were looking for a trumpet player.

Rouse told Ramjett that he had a gig lined up at the 2002 Winter Olympics in Salt Lake City. “He said, ‘I'll be back in two weeks if you still need a trumpet player,'” Ramjett remembers. During his time in Salt Lake, Rouse listened to Fabulous Boogienauts recordings and made charts for the songs, something Ramjett says no one had done before.

While the band had many singers over the years, Ramjett says that Gelvin, who had a music degree from the University of Colorado and was a longtime teacher at the School of Rock Denver, was the definitive voice of the group. Her speaking voice was wispy, kind of like that of actress Jennifer Tilly, but when Gelvin sang, she sounded like a “Black woman in a Baptist church," he recalls. "Nothing but fucking snotty-nosed attitude.” 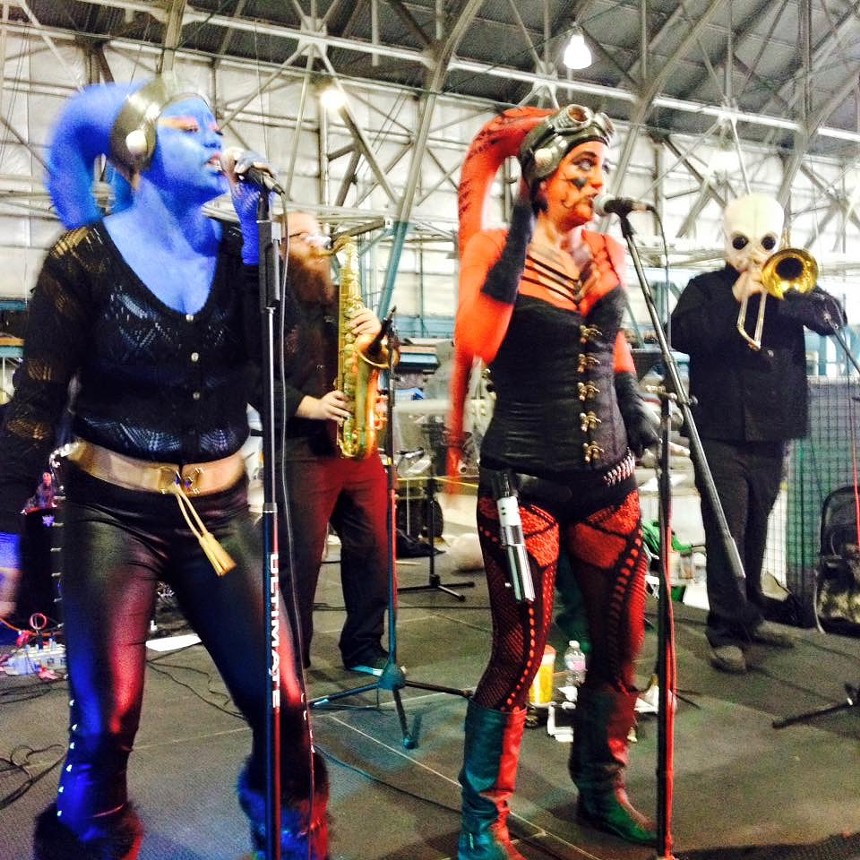 Jennifer Gelvin (center) of the Fabulous Boogienauts performing at a May the Fourth Be With You concert.
Courtesy of Rocky Ramjett
While Rouse had never really written a song before joining the band, Ramjett says he went on to contribute many ideas and write most of the horn lines on the 2013 sophomore album 12" Fully Funktional. Sometimes Ramjett would give Gelvin a song title and have her write lyrics.

After the pandemic hit, the Fabulous Boogienauts moved into a rehearsal space and set up a studio. Ramjett and the other members figured they would just buckle down and start recording the album Too Funk to Drunktion, a working title that Gelvin came up with, Ramjett says.

After a fire at the rehearsal space last October, the bandmembers continued to record at a few other studios, laying down tracks when they had  a chance, including vocal and trumpet tracks by Gelvin and Rouse.

While the tracks weren’t fully finished before the deaths of Gelvin and Rouse, Ramjett plans to go through some of the mixes to see what “Jenn left us and what Keith left us," he says. “Everybody just figured there was plenty of time."
KEEP WESTWORD FREE... Since we started Westword, it has been defined as the free, independent voice of Denver, and we'd like to keep it that way. With local media under siege, it's more important than ever for us to rally support behind funding our local journalism. You can help by participating in our "I Support" program, allowing us to keep offering readers access to our incisive coverage of local news, food and culture with no paywalls.
Make a one-time donation today for as little as $1.