Jay Bianchi on the porch of So Many Roads Museum & Brewery. Kyle Harris
The year-old Colorado Musicians Union has secured its first major public victory.

Jay Bianchi, the Grateful Dead entrepreneur and venue owner accused of sexual assault by one woman and rape by another — claims that he denies and calls "a witch hunt," "lies" and "a vicious attack" —  just announced on Facebook that he's ending his 26-year run as an independent music promoter.

No doubt, it's been a marathon. Bianchi is leaving the business with plenty of good memories, but also a record of bad losses and some burned bridges.

But first, he'll have one last hurrah over the weekend, at the Melvin Seals and JGB Independence Celebration at So Many Roads, the last of the many venues with which he's been involved. After that, Bianchi will hand over the booking reins at So Many Roads, which he describes as "the rosy culmination of all of my creations," to bartender Erica Morris; restaurateur Tyler Bishop will carry on as the sole owner.

"Throughout the years, I have always looked for Charlie to inherit the Chocolate Factory, but only one gave me back the Everlasting Gobstopper when I handed it to them," wrote Bianchi, who fancies himself a hippie Willy Wonka. "Only one called me every day, or checked in, no matter what, to make sure I was okay. Only one never took for granted what could have been assumed. It took me a while to find Erica Morris (I had to wade through some false friends), and although she is a Phish Kid, she is steadfast and true. She knows, learns and appreciates the fine nuances of Grateful Dead...

"I have found her to be an unwavering and true friend as well as a compassionate, hard worker," he added. "She can't help but to tell the truth no matter what the outcome is or who it hurts." 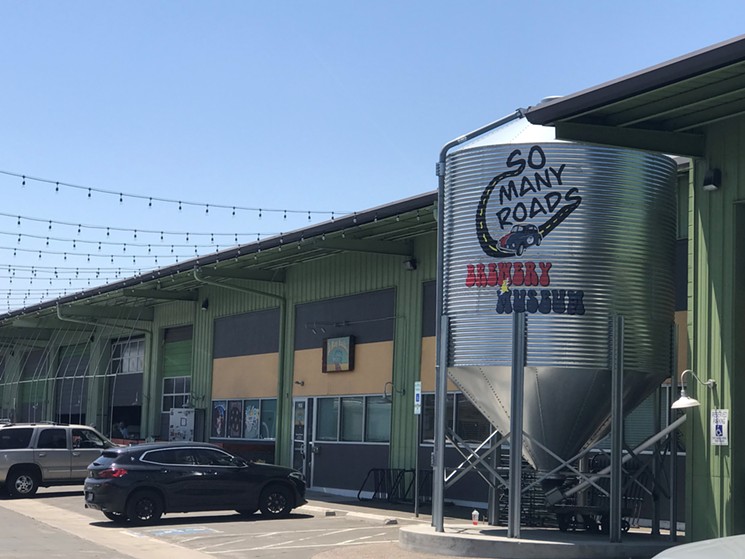 Outside So Many Roads Brewery and Museum.
Kyle Harris
In that post, Bianchi offered some poetic self-reflection on his late brother, Phil Bianchi, and the many venues he ran. "The energy of Quixote's True Blue made possible the creation of Sanchos Broken Arrow. We filled the places with Grateful Dead vibes and we mined quite a bit of happiness out of them. Oh the smiles that emerged from these unassuming bars powered by so many dreams and miracles. These smiles in turn made us smile and we became greedy for smiles," he wrote.

"We kept seeking what would make more and more people happy," he continued. "We did festivals, we did events, we did bus rides, we conjured up more ways to make people happy at more places and in more ways. Cervantes Masterpiece Ballroom followed and so did Dulcinea's 100th Monkey, Owsley's Golden Road, Dark Star Lounge, The Donkey OT / New Speedway Burger, Be On Key Psychedelic Ripple, Owsley's Crazy Diamond as well as stints at the Oriental Theater, Sculpture Park and Civic Center Park. We took chances and we made mistakes. Sometimes the mistakes were financial and emotional disasters."

One of Bianchi's high-profile disasters occurred in 2018, when he "did punches" with staff, as he described the incident to Westword, and later took a swing at musician Aidan Pagnani, one of the founders of the union.

At a protest last month outside So Many Roads, where dozens of demonstrators were chanting "Hey, hey, ho, ho, Jay Bianchi has got to go," Pagnani told him: "My name's Aidan, and you tried to sucker-punch me. Everybody in Denver hates you."

When Pagnani asked Bianchi if he would commit to leaving the Colorado music scene, the entrepreneur remained silent and stone-faced. But now Pagnani has his answer.

"It’s a win for the community," says Sarah Mount, a saxophonist and Colorado Musicians Union co-head. "It’s a win for Denver, for the musicians, for the potential victims that could have been."

Mount acknowledges that Bianchi has had a massive impact on the scene, but says that his legacy has been tarnished by his failure to pay bands fair rates (and sometimes anything at all, she says, a charge that Bianchi denies) as well as his mistreatment of staff and musicians.

"All these horrible people have the capacity to do creative things," Mount says. "It doesn't change that they’re awful people and use these creative things to manipulate, as a power move. It’s always disappointing. Wouldn’t it be nice if everyone was trying to do their best and not do this shit?"

Bianchi, in turn, accuses Mount and Pagnani of trying to launch political careers through false accusations and their work with the union. He used his departure announcement on Facebook to throw a few punches at the union and his accusers, lamenting that the charges against him have not been retracted.

Morris, who's still in talks with Bianchi about the specifics of the transition, stands by him, noting that over the five years she's known Bianchi, she's never seen him engage in predatory behavior. She's been frustrated to see how fast the accusations spread on social media, she adds, and as a sexual-assault survivor herself, says that it has hurt to watch people accusing Bianchi of assault.

"Jay's always been nothing but kind to me, and I'll be the first to say that, yeah, he can be an asshole, but there's a difference between being an asshole and being a sexual predator," Morris says. "Those are two wildly different things."

The Colorado Musicians Union, Morris and Bianchi do have one thing in common: They're all wondering whether there's actually a Denver Police Department criminal investigation into Bianchi.

The DPD has repeatedly declined to comment about any such investigation to Westword. And Bianchi, who says he's heard rumors that the police plan to raid So Many Roads on July 1, insists that he wants to take a lie detector test and have the whole case examined in court.

"I feel like eventually, the truth will get out, and I will have...all the days will be pretty good," Bianchi says. "Who knows? I mean, maybe it won't get out. Maybe what I think is right isn't right. You know? I perceive I'm doing as good as I can. Being the face of some place for 26 years — and it is rock and roll — things can get weird. So, yeah. Me being the solitary face of one place is not helpful, you know?"

So where's he taking his face next?

"I don’t feel like I have to do anything," Bianchi responds.  "I can go write a book. I don’t want to be harassed. I mostly don’t want to be harassed for something I didn’t do."
KEEP WESTWORD FREE... Since we started Westword, it has been defined as the free, independent voice of Denver, and we'd like to keep it that way. With local media under siege, it's more important than ever for us to rally support behind funding our local journalism. You can help by participating in our "I Support" program, allowing us to keep offering readers access to our incisive coverage of local news, food and culture with no paywalls.
Make a one-time donation today for as little as $1.