Paul Iwancio Didn't Know He Came Off as a Religious Singer

Paul Iwancio: “Some years ago, I was doing a live audition to perform at a coffeehouse in Baltimore. After singing three strong songs passionately, I asked the booker, ‘Well, how did I do? Did I get the gig?’ He replied, ‘Well, we like you, Paul, but we don’t usually hire religious singers.’ Karl Christian Krumpholz
“I stood there, shocked, since I really didn’t perform any religious material. I asked, ‘Why do you think I’m a religious singer?’ He replied, “Well, you know, that last song, with the fountain not made by man and the road not being a simple highway.’ I explained, ‘That was “Ripple,” by the Grateful Dead.’ At that moment, I realized that either the Grateful Dead was a religious band, or I just sang kinda religiously. In any case, I landed the gig, perhaps because they were too embarrassed not to hire me.” 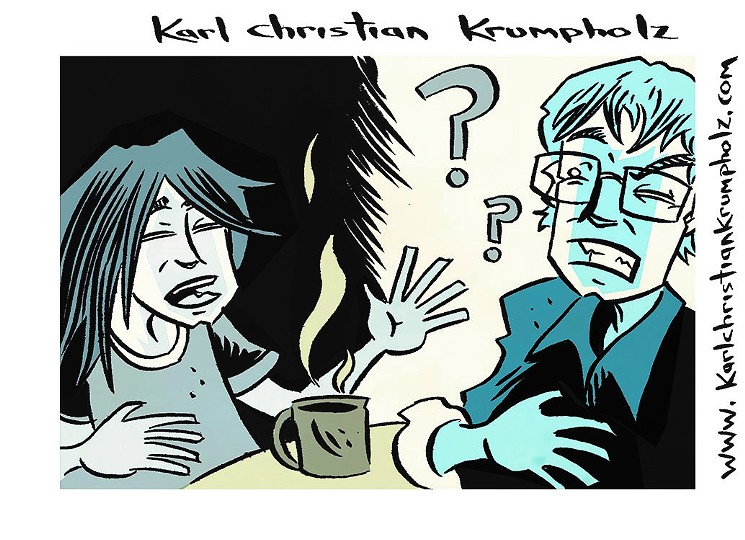 Karl Christian Krumpholz
Paul Iwancio will release his new CD, How We Roll Now, at Barfly on October 23. He hosts a songwriters’ showcase every third Friday at Infinitus Pie in Wheat Ridge.

Editor's Note: The Denver Bootleg is a series chronicling the stories of local bands by longtime Denver cartoonist Karl Christian Krumpholz. Visit Krumpholz's website to see more of his work.
KEEP WESTWORD FREE... Since we started Westword, it has been defined as the free, independent voice of Denver, and we'd like to keep it that way. With local media under siege, it's more important than ever for us to rally support behind funding our local journalism. You can help by participating in our "I Support" program, allowing us to keep offering readers access to our incisive coverage of local news, food and culture with no paywalls.
Make a one-time donation today for as little as $1.