The Venue Is Closing After Five Years 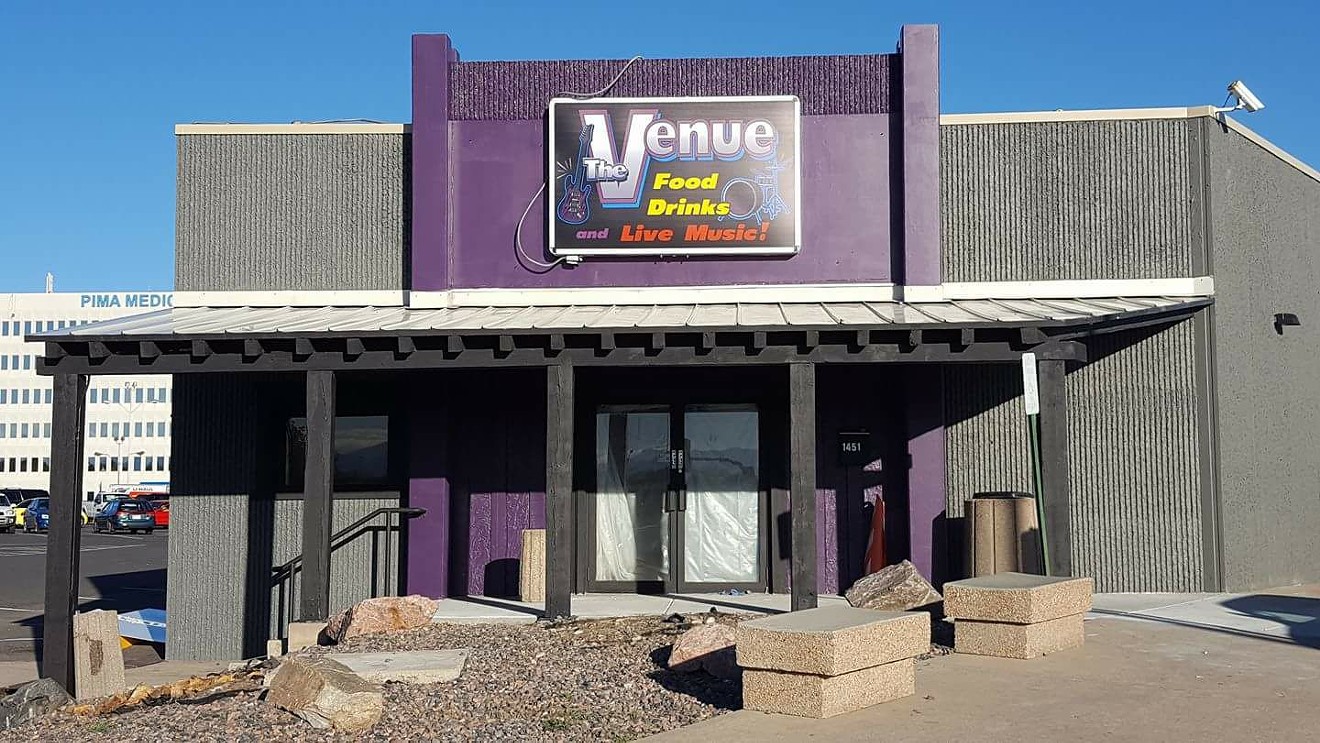 The Venue says goodbye with a farewell party on Sunday, November 13. Facebook
In 2017, Pam and Brett Braun and their friend Everett Dickensheet opened The Venue at 1451 Cortez Street with the vision of creating an ’80s rock club. And for five years, music lovers and bands have called the spot home.

But all good things must come to an end, and the Venue will close its doors with a blowout farewell concert on Sunday, November 13. The loss is felt keenly by many regulars, who shared their love for the club on Facebook when it announced its closing on September 26.

A Latin nightclub called El Nuevo Original will take over the space with a grand opening on November 18.

While the Venue has primarily been known as a live-music club, it's also had an impact outside of music, creating a family-friendly hang where parents could bring their kids for Taco Tuesdays and bingo, and where soft-dart leagues were mounted during the day or on slow nights. The club welcomed bands of all different genres to its stage, from rock to indie to metal. (The only style it steered away from was country, because it's located so close to the Grizzly Rose.) When it first opened, Pam says, Dickensheet imagined it as a mini Fillmore Auditorium, with a bigger stage and sound system than those of the building's previous occupants, which included Brewski's, Bottle Caps, Buckin' Harley's and more.
click to enlarge Pam, Brett and Everett.
Pam Braun
During the pandemic shutdowns, the Venue often presented free livestreams, and viewers could tip the participating bands to keep them funded during a time when live performances were at a minimum. But it was still difficult to keep the place afloat, Pam says, and, sadly, Dickensheet died from COVID on September 25, 2021, at age 47.

The Brauns were just getting the club back on its feet when they were approached by a buyer this past September. With the couple being in their sixties and Dickensheet having always been "the young one to run it," according to Pam, they decided it made sense to sell. "It just felt right," she reflects. "It’s been so crazy since Everett’s gone. The Venue started turning around, [but] we were still recovering from COVID, because we were closed for ten months."

Pam credits Dickensheet and promoter Mike Martinez with the Venue's success over the years, saying she couldn't have done it without them, or the staff. "It’s bittersweet, because I'm gonna miss everyone," she says. "I’ve met so many great people."

One of her favorite memories is when the club hosted Extreme Dwarfanators Wrestling, a little-person wrestling match, in 2019. The show, a stark departure from the Venue's typical events, brought a lot of new visitors to the space. Martinez had seen advertisements for the show, and they agreed they wanted to do something different. "It was a good time [with] a bunch of people that we didn't know," Pam says.

She lists some of the memorable bands that have played the Venue over the years, including Driven by Turmoil, Mr. Steak and El Loco Fandango, a ZZ Top tribute band. But it's hard to choose a favorite, she adds, because so many local bands have played there.

And a swath of local bands responded to her call for performers at Sunday's farewell concert; she estimates that just under fifty reached out. She was able to narrow it down to ten acts, and although the members of One Track Mind have split up, they're reuniting for this special show. The lineup also includes El Loco Fandango, Grind Cat Grind, Johnny Got Rox, Driven by Turmoil, Something for Tomorrow/Nordic Daughter, Dark Red Sky, Back Stabbath, Poison'D and Kaos Conspiracy, which played at the Venue's opening. The closing night will also include a raffle of signed and unsigned guitars that adorn the club's walls, and all ticket and raffle proceeds will benefit Denver nonprofit Drumming Up Hope.

While there are other bars in Denver that offer live music, Pam says the spirit of the Venue can't be replaced.

"I’m sad and I’m happy and I’m all of the above," she concludes. "Our regulars are sad. Everything happens for a reason, right?"

The Venue closing party and concert, 12:30 to 10 p.m. Sunday, November 13, 1451 Cortez Street. Tickets are $10-$75.
KEEP WESTWORD FREE... Since we started Westword, it has been defined as the free, independent voice of Denver, and we'd like to keep it that way. With local media under siege, it's more important than ever for us to rally support behind funding our local journalism. You can help by participating in our "I Support" program, allowing us to keep offering readers access to our incisive coverage of local news, food and culture with no paywalls.
Make a one-time donation today for as little as $1.
Katrina Leibee, a recent graduate of Colorado State University, is an editorial fellow at Westword, covering politics, business and culture.
Contact: Katrina Leibee
Follow:
Twitter: @katrinaleibee