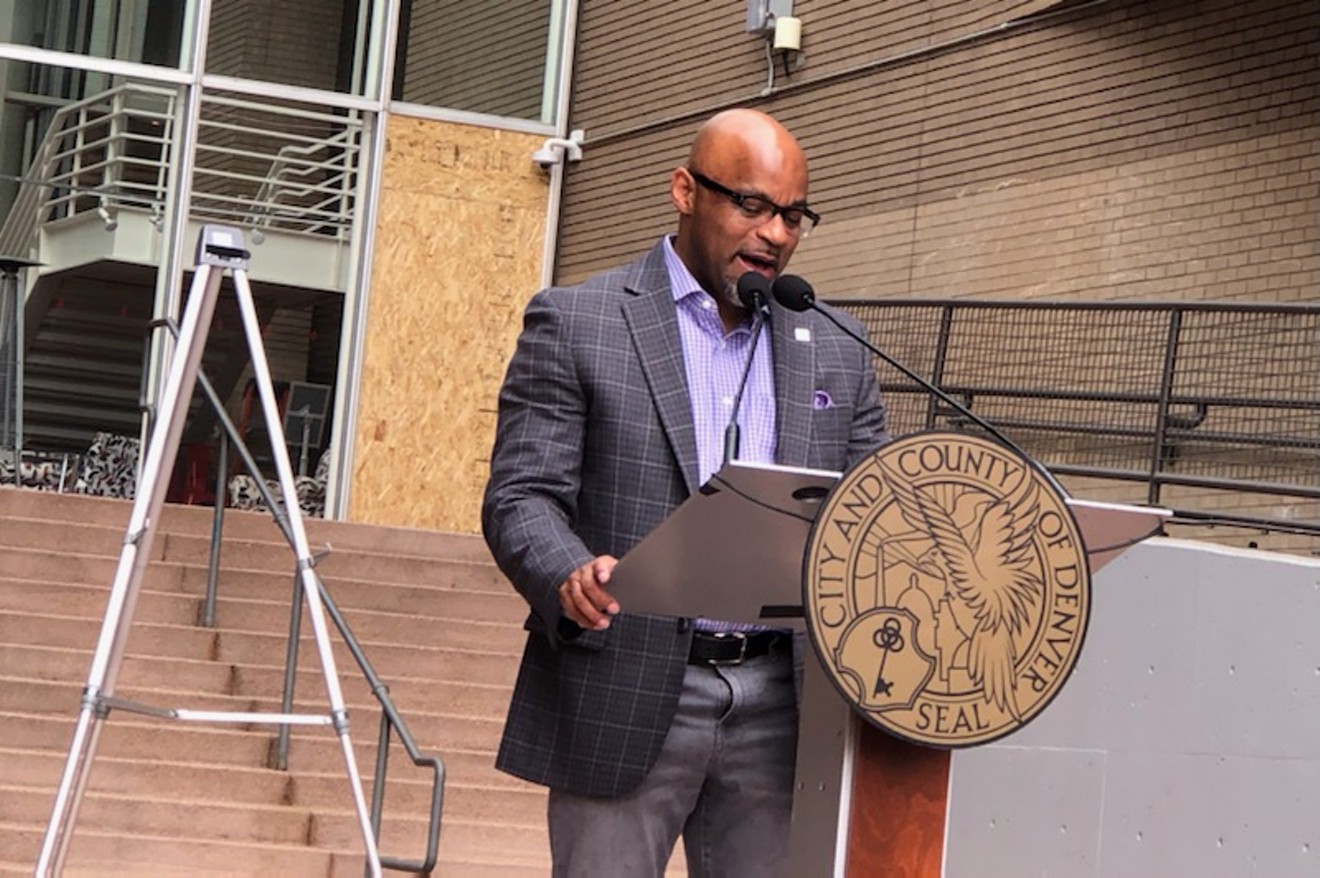 Mayor Michael Hancock is ready for a mask-free "All-Star Summer." Jon Solomon
On May 14, Mayor Michael Hancock announced that the City of Denver would be lifting its mask mandate in most settings and doing away with capacity limits and social distancing requirements starting on Sunday, May 16.

"Go to a restaurant," Hancock said at a press conference called to highlight the summer ahead. "Enjoy yourself."

The mayor did note that there will still be some places where masks are required, including hospitals, doctors' offices, child-care centers and schools. But indoor performances and dining will be mask-free.

He attributed this shift in policy to the 42 percent of Denver residents who have received the vaccine.

"Now, if you haven't been vaccinated, let this serve as a strong incentive to get vaccinated," he said. "This is happening because people got the shot."

So what is actually happening around Denver this summer?

If the Hancock administration has its way, downtown will be springing back to life, and there's a lot to look forward to. Major League Baseball's All-Star Game is taking place, the Colorado Symphony will be playing a string of outdoor shows, Taste of Colorado will return Labor Day weekend, the Downtown Denver Partnership will host 85 free lunchtime and Thursday evening concerts, and AEG Presents is booking a series of artists, including Fitz & the Tantrums, Itchy-O and Goose, to play shows in Sculpture Park.

The hope, said Ginger White, head of Denver Arts & Venues, is to rebuild the music-industry economy and revitalize downtown after pandemic shutdowns wreaked havoc on restaurants, shops and galleries.

And plenty is already happening. Most museums are open. Red Rocks is back in a limited capacity. Many small venues have been operating with tiny crowds for months, and Levitt Pavilion launched its summer season May 14.

Still, most in the industry, which was shut down over the past year and saw huge losses, are hurting. Many small-venue owners have taken out second mortgages on their homes to keep paying rent, and landlords are becoming impatient, says Chris Zacher, co-head of the Colorado chapter of the National Independent Venue Association and Levitt Pavilion Denver. Music workers have had to rely on unemployment or have shifted industries altogether.

"Before the pandemic, Colorado's music industry was a rip-roaring $1.4 billion industry supporting some 16,000 jobs," White said. "We're excited to bring some of that economic vibrancy and jobs back to downtown Denver.
While the autumn return of our resident companies to the [Denver Performing Arts Complex] houses behind us is still a work in progress, the ability to get some of us together again, outdoors this summer, is our focus.
What will happen across Denver over the next few months is extraordinary — a coordinated effort to bring people together outside to celebrate a Colorado summer."

Zacher raised concerns to Westword that the city is spending too much energy boosting downtown and not enough in other areas like South Broadway and East Colfax Avenue, where many smaller venues are trying to stay afloat.

And he doesn't think the time is right for Denver Arts & Venues, the city's cultural agency, to launch new programming and open a new venue in Sculpture Park — especially with a massive corporation like AEG Presents — when so many of the small bars, clubs and theaters in town are struggling right now. As he tells it, additional competition from the corporation that has dominated the city's music business in recent years would be tough for those venues, and while he respects AEG's right to compete aggressively in a free market, he's concerned that the City of Denver might be favoring its relationship with that company over smaller businesses.

Arts & Venues, an enterprise agency that funds itself through renting out its venues, has suffered major financial losses since March 2020. Some of those are likely to be recouped when the federal Shuttered Venue Operators Grant emergency money comes through for the venues that the agency runs, like Red Rocks. Arts & Venues is also looking for other ways to fill its depleted coffers, and the partnership with AEG is likely to do that.

White assured Westword that this is not an exclusive partnership with AEG, and noted that other promoters will be invited to participate in the Sculpture Park concert series.

"We are open to other interested parties who would like to participate," she said. "And I know our staff will be booking other opportunities for local musicians and organizations to enjoy the amenity that will be here in Sculpture Park later this summer."
KEEP WESTWORD FREE... Since we started Westword, it has been defined as the free, independent voice of Denver, and we'd like to keep it that way. With local media under siege, it's more important than ever for us to rally support behind funding our local journalism. You can help by participating in our "I Support" program, allowing us to keep offering readers access to our incisive coverage of local news, food and culture with no paywalls.
Make a one-time donation today for as little as $1.