DJ Chonz is launching a new foundation. DJ Chonz Foundation
Mario Rodriguez, aka DJ Chonz, has been a staple of the Denver music scene for more than twenty years. After deejaying for artists like Dr. Dre, Eminem and Slick Rick and hosting a show on KS107.5, about three years ago he decided to give back to the community.

"Before [the DJ Chonz Foundation] came to fruition, I’d been giving scholarships to CU Denver and their music industry program," Rodriguez says. "I wanted to team up with other organizations and diversify. You never know. I just didn’t want to be exclusive to one institution anymore."

That's what sparked his new nonprofit, DJ Chonz Foundation, which gives scholarships and mentorship to Denver youth. "I wanted to help students or youth like myself who had an interest in music, arts  higher education, but maybe they didn’t have the means or the access to get a turntable, buy a record. It’s an old term, because kids are not buying records like I was back then, but I wanted to give them opportunities."

On October 4 at Ophelia's, Rodriguez will launch his nonprofit at a party with a lineup of DJs and hip-hop artists including DJ Maseo from De La Soul; DJ Rectangle; DJ Rasta Root, who was a member of a Tribe Called Quest; and others to help fundraise for the foundation to support students in need of financial assistance. People who want to support the organization but can't attend the event can donate at DJ Chonz's website.

"We are teaming up with Youth on Record and donating some of the funds to their scholarship program. Their program helps students who are 18 to 25 years old to build out a business plan to get started in the music industry," Rodriguez says.

The foundation is also teaming up with SOS Outreach, an organization that Rodriguez has been involved with since 1997.

"It takes inner-city youth up to the mountains to experience the lifestyle of the outdoors," he says. "If you could imagine — I’m from Denver. I’m a city guy. But a lot of the youth could count on one hand how many times they’ve been up to the mountains. It’s crazy to think about that."

The last organization that the DJ Chonz Foundation will work with is the Denver DJ School. DJ Chonz Foundation
When Rodriguez was just starting out in the music industry, he used to ride the #8 RTD bus from Thornton to downtown Denver just to get to a hip-hop spot called Casa de Funk and practice on someone else's turntable.

"I didn’t have the luxury of having an instructor teaching me how to DJ or anything of that nature," he says. "I had to learn from tape cassettes and randomly going to parties to see how other DJs . ... That’s how I feel I can be a resource and be different from how I grew up."

Rodriguez's ultimate vision with his foundation is to "get as many students or youth active in their passion. If we could raise enough funds to send them to college or experience it as I did with the CU music-industry program, if that’s the direction they want, so be it. If it’s deejaying, if it’s with the outdoors, if it’s with Youth on Record, it should be able to fund their dreams and continue to grow and expand." 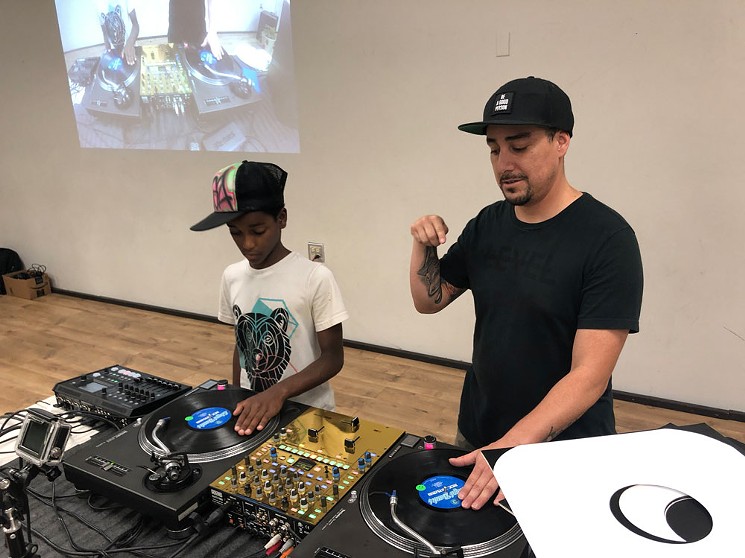 DJ Chonz Foundation
His favorite part of the foundation has been seeing kids interact and smile from experiencing music hands-on for the first time. "Someone who has never experienced touching a vinyl record, or anything like that. Just the infatuation of music and sound," he says.

He tells the story of one student, Christian Perez, who was awarded a scholarship to the Denver DJ School.

"He has autism, and his mom told me he wasn’t really thriving in school and not smiling," Chonz recalls. "But every time he came down to the DJ School for an hour and participated in class, he would have the brightest smile and would be happy for the rest of the week.

"I like discovering how everyone learns differently," Chonz adds. "We are learning how to count beats, and it was hard for [Perez] to comprehend, but then I would write beats on the board, and he could visually see and count at the same time. I know I’m a visual person, I learn differently. ... Learning how I can touch into what makes a child, or someone who's older, what makes them tick. What motivates them that they would want to continue to do something like this. ... Music is powerful. [Perez] didn’t want to leave after his hour was done. He wanted to stay."

DJ Chonz Foundation Launch Party, 8 p.m. Thursday, October 4, Ophelia's, 1215 20th Street, $15 to $35.
KEEP WESTWORD FREE... Since we started Westword, it has been defined as the free, independent voice of Denver, and we'd like to keep it that way. With local media under siege, it's more important than ever for us to rally support behind funding our local journalism. You can help by participating in our "I Support" program, allowing us to keep offering readers access to our incisive coverage of local news, food and culture with no paywalls.
Make a one-time donation today for as little as $1.