Down Time and Tennis Are a Match Made in Indie Heaven 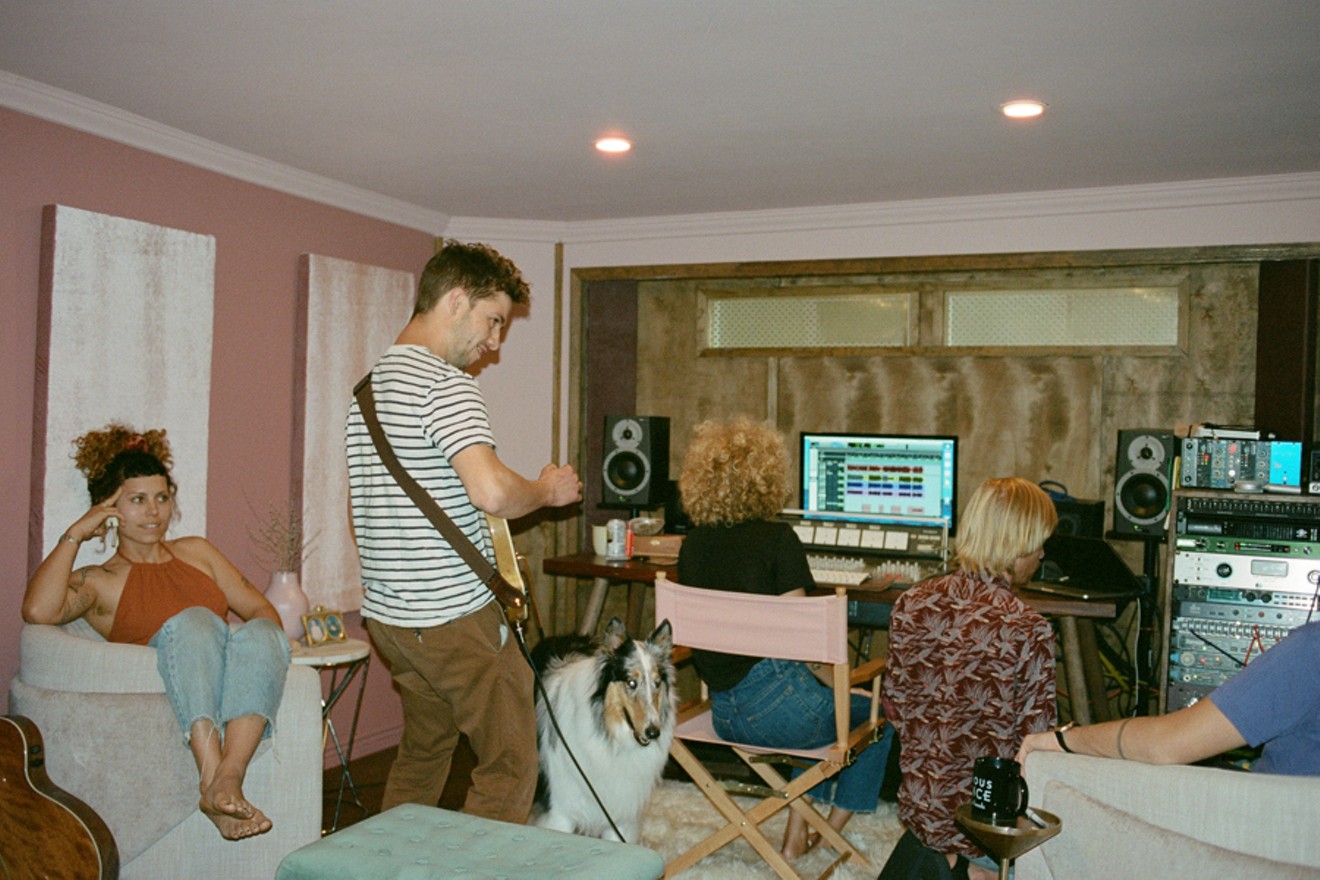 Tennis and Down Time recording together. Holly Hursley
Alyssa Maunders, the vocalist and guitarist behind Denver-based band Down Time, was studying to be a classical violinist when she was first swayed by the allure of playing in a band.

"I grew up playing classical violin, and that's what I studied at college too. I studied it when I went to college and then kind of realized that it wasn't my badge," she explains. "I just was not going to be a professional, and it was around that time that I met someone who introduced me to songwriting and playing in a band."

That person also introduced Maunders to Justin Camilli, a guitarist and keyboard player, who in turn introduced her to David Weaver, a bassist, drummer, and recording engineer. The three came together to form Down Time, and are about to release their debut album, Hurts Being Alive, produced by Patrick Riley and Alaina Moore of Tennis.

Down Time had a long list of potential band names, but kept finding that they were already taken. In fact, when they did decide on Down Time, they specifically made it two words to distinguish themselves from other bands of the same name. Though it was one of many options, Down Time ended up being the perfect name for them.

"It sort of on accident encapsulated the vibe of our band and kind of how we approach music and what we like to do together when we're not playing music," says Maunders. "Just kind of hanging out listening to other albums and just taking it easy, mostly. The three of us are pretty laid back."

So what does Down Time listen to in their down time? "I've been really into Cate Le Bon, her last album is one of my favorites, and Justin and I both really really love her stuff. Another inspirational female vocalist would be Lomelda. I really got into her album, and that was a big motivator for songwriting in the last couple of years," says Maunders. "Justin and I listen to a lot of '60s and '70s pop music. Velvet Underground we revisit quite a bit. We've covered them a couple of times, and that's a really good sound for us. Angel Olsen, of course. I've been following her progression, and we loved the most recent album also. And then the three of us all went to go see her at the Gothic, so that was a really fun band activity." "Usually I say it's like me, but a song. But that's not very good if you don't know me," Maunders says. "We had a review recently that we really liked where she said that we kind of fall into 'the crossroads of retro folk pop, indie rock, and psych funk,' which was nice because it sort of encapsulated the three genres that I think we listen to a lot."

Down Time first drew praise with a five-track EP in 2017 called Good Luck!. The group is now back with nine more original tracks (plus one song from Good Luck!, "No Sentiment") for its first full-length album, Hurts Being Alive.

The band has taken its sweet time perfecting Hurts Being Alive, which is out on March 6.

"We should probably have more of a sense of urgency for creating material and putting it out," says Maunders. "Making an album can take so long. People that put an album out ever year, it's like holy shit. Or people that put out two in a year, you have to just be working on that all the time, and obviously the three of us have jobs and other things that get in the way of the music. I think that we worked on this album for the last year and a half maybe. We even toured with these songs last March before we recorded anything. So they were all a little bit different when we did that."

Hurts Being Alive was definitely worth the wait. From the dreamy surf-rock vibes of "Take Me to a Place" to the Regina Spektor-esque "Not a Complicated Person," Down Time establishes themselves as indie darlings with a solid collection of optimistic easy listening. Never has the F-bomb sounded so gentle as when Maunders encouragingly whispers, "Fuck 'em all, you're a star," on the track "Star."

When it came time to actually record the album, Down Time had one serious advantage: the expertise of Patrick Riley and Alaina Moore, the husband-and-wife duo behind the acclaimed indie-pop band Tennis. Maunders had been a fan of Tennis since its inception, and heard through the grapevine that they were building a recording studio, and looking to work with smaller, Denver-related projects. So Down Time decided to take a shot.

"We cold-called their manager, who luckily listened to our stuff, or maybe was aware of us on some level, and passed it along to Pat and Alaina," Maunders says. "They reached out to us and said they were interested in meeting, and talking, and listening to the demos, so we just started a conversation that lasted a few months, and then we went into the studio. Honestly from my perspective, there are so many reasons and ways that this could benefit us, not just in terms of having their name on our album, because that goes without saying of course, that gives us a little bit more attention, but I also knew that just with their combined wisdom and production sensibility, there's no way that this would not be at least a good learning process for us." 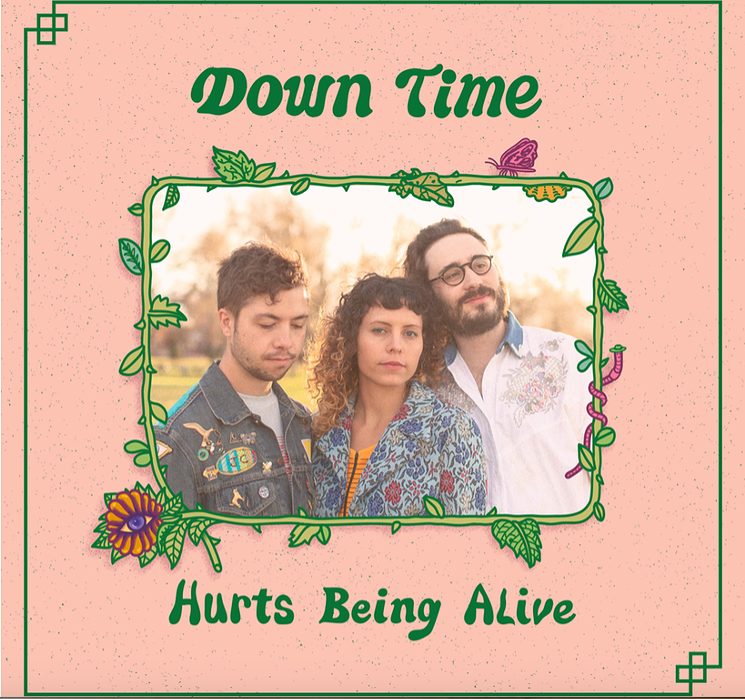 The album artwork for Down Time's debut album, Hurts Being Alive.
Holly Hursley
Being rather new to the recording studio process and not knowing Riley and Moore personally, Maunders was at first nervous.

"It could've gone so many ways, and you never know when you work with somebody that you don't know personally, and they didn't know us, and they hadn't ever seen us play live, but I like to think that they just had an intuition that it would be a good collaboration," she says.

Once Down Time and Tennis met face to face, Maunders immediately knew the partnership would work

"As soon as we met and started a conversation we all knew that it was going to be a good situation, because we just have a similar vibe personality wise that was really comforting. They cleaned the songs up in a really nice way, which was super helpful for me as a songwriter, because I don't have that objective view as often." she says. "It was very supportive and really encouraging, and they corralled our energy in a good way. They steered the ship well."

Down Time is about to embark on a DIY tour of the Pacific Northwest, and the bandmates are already thinking about their next album.

"We want to record another album sometime this year," says Maunders. "Which is crazy, but you have to do it immediately after, because it takes so long to finish. You enjoy it for a second, but then you just have to start working on new stuff. We have a handful of songs we've been messing around with, so just trying to get those down. And I don't know, trying to find someone to make our next album."

Hurts Being Alive drops Friday, March 6. Down Time celebrates the release at 8 p.m. Friday, March 6, at Lost Lake, 3602 East Colfax Avenue. Bluebook and  Bellhoss open. Tickets, $10 in advance or $14 on the day of the show, are available at the Lost Lake website.
KEEP WESTWORD FREE... Since we started Westword, it has been defined as the free, independent voice of Denver, and we'd like to keep it that way. With local media under siege, it's more important than ever for us to rally support behind funding our local journalism. You can help by participating in our "I Support" program, allowing us to keep offering readers access to our incisive coverage of local news, food and culture with no paywalls.
Make a one-time donation today for as little as $1.