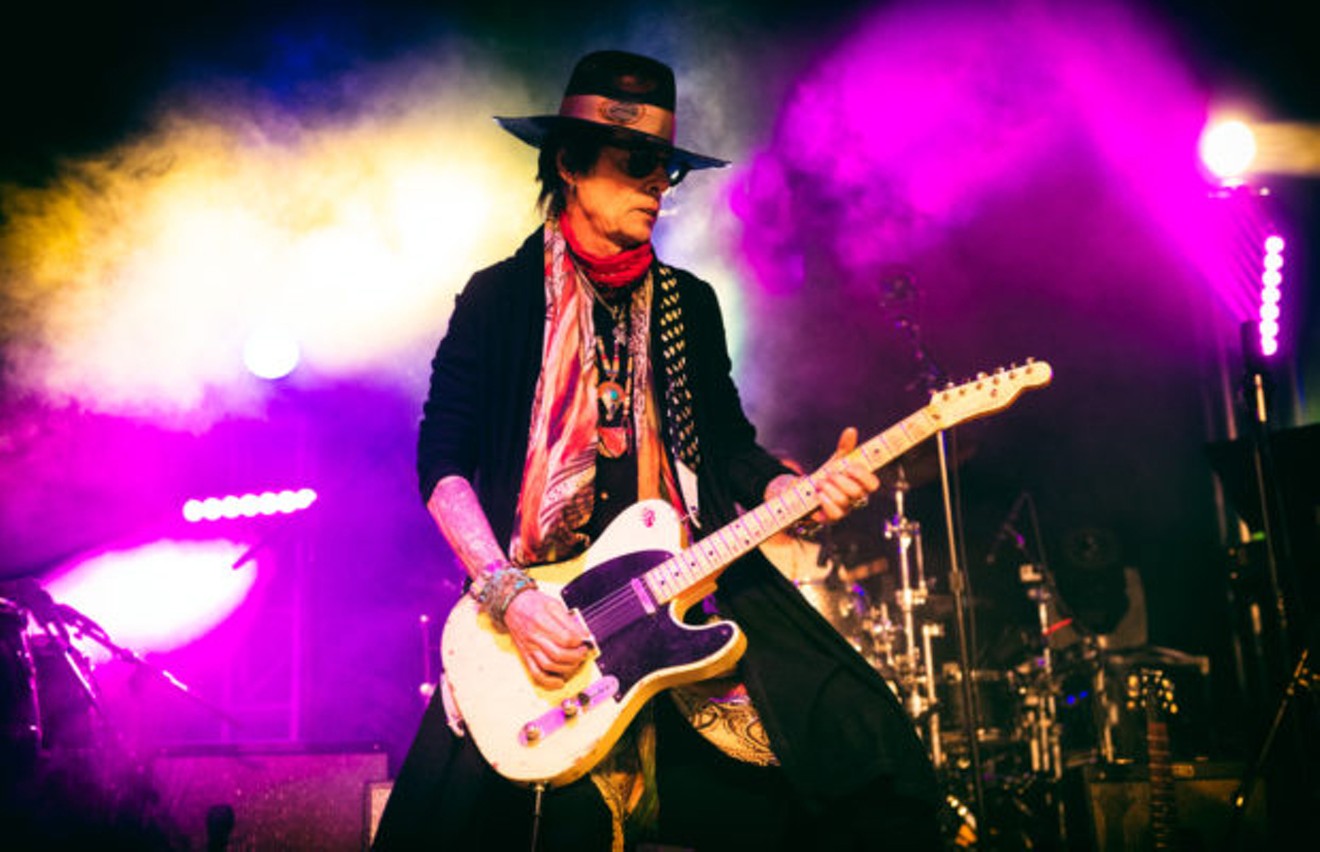 Earl Slick is on the Celebrating Davie Bowie tour, which stops at the Paramount Theatre on Sunday, February 25. Joe Del Tufo

The day before David Bowie played his last show in Denver — at the Fillmore Auditorium on January 19, 2004 — the band had the day off.

Guitarist Earl Slick, who'd been touring with Bowie on and off since 1974 and was on the 2004 A Reality tour, remembers Bowie calling him that morning asking him if he wanted to go to the rodeo, since the National Western Stock Show was happening at the time.

"One good thing we did yesterday, we went to the rodeo," Bowie would tell the crowd at the Fillmore. "It was like somewhere else. I've never been to one before. Well, I went to one in Spain, but in Spain they take swords out and kill the bulls. They don't do that here. It was just fantastic. It was such a great afternoon. Good sport, that was."

On that day off, Slick says he and Bowie also bought zoot suits at Sauvecito, the now-defunct clothing shop on Santa Fe Drive. "Me and DB both bought zoot suits, and we wore them at the gig that night at the Fillmore. It was fun. We had a blast, man. It was really cool."

Also on tour with Bowie at the time were pianist Mike Garson, who began his tenure with Bowie in 1972, and guitarist Gerry Leonard, both of whom are touring with Slick on the Celebrating Davie Bowie tour, which stops at the Paramount Theatre on Sunday, February 25. The tour also includes longtime Bowie bassist Carmine Rojas, vocalist Bernard Fowler, and a number of guest singers.

Slick says that none of the singers are doing what he calls "Bowieoke" — trying to sound like Bowie. "The singers are interpreting the songs the way they sing them," Slick says. "The last thing you want to do is try to emulate David, because it's not possible. Everybody is really on their game on this thing. I would say we're pretty close to the bone on the arrangements, but not every single little nuance on it, because you don't want to do that, either, because then you start sounding like a jukebox."


Slick adds that they're covering the bases of Bowie's catalogue, from the beginning to the end. "Obviously you can do just so much of it. We play just enough from each era as we go along. It keeps us happy. There's plenty of hits in there to keep the fans happy. Mike Garson put the set list together, and he put together a really good one."

Slick is particularly familiar with Bowie's mid-’70s output, since he played guitar on Young Americans and Station to Station as well as David Live, which documented a show from the Diamond Dogs tour, Slick's first with the singer.

Slick had no idea what he was getting into when he showed up for that tour. He says he had "the weirdest audition ever on the planet," at RCA Studios in New York City in early 1974, when he was 22 years old.

"I couldn't see anybody in the control room because the lights were turned off," Slick says. "I'm talking to somebody with an American accent, who I'm guessing at the time was Tony Visconti. 'So, okay, what are we doing?' I said. 'I thought I was going to be playing with a band.' He goes, 'Just put on the ’phones and play.' I said, 'Okay.'"

Turns out David Bowie and Visconti were mixing Diamond Dogs at the time, and Slick was asked to play along with a few tracks. "I literally played for only twenty minutes, if a half hour," Slick says. "I didn't even think it was that long. There was this dead silence. I think, 'Okay, they must hate my guts.'"

A minute later, Bowie walked into the room and sat down with Slick for about half an hour. Slick says they shot the breeze, played a little bit of guitar and then said goodbye. Bowie's personal assistant told Slick they had another ten to twelve guitarists to look at and told him they'd get back to him in a few weeks.

"I'm thinking, 'Oh Christ, this is going to be a long two weeks,'" Slick says. "Thank God the phone rang the next day and they offered me the job."

Within a few weeks, Slick was rehearsing for the Diamond Dogs tour, which started a relationship that would endure on and off for the next three decades. He later joined the band for the Serious Moonlight tour in support of Let's Dance in 1983 and the A Reality tour in 2003 and ’04 in support of Heathen and Reality, on which Slick also played guitar.