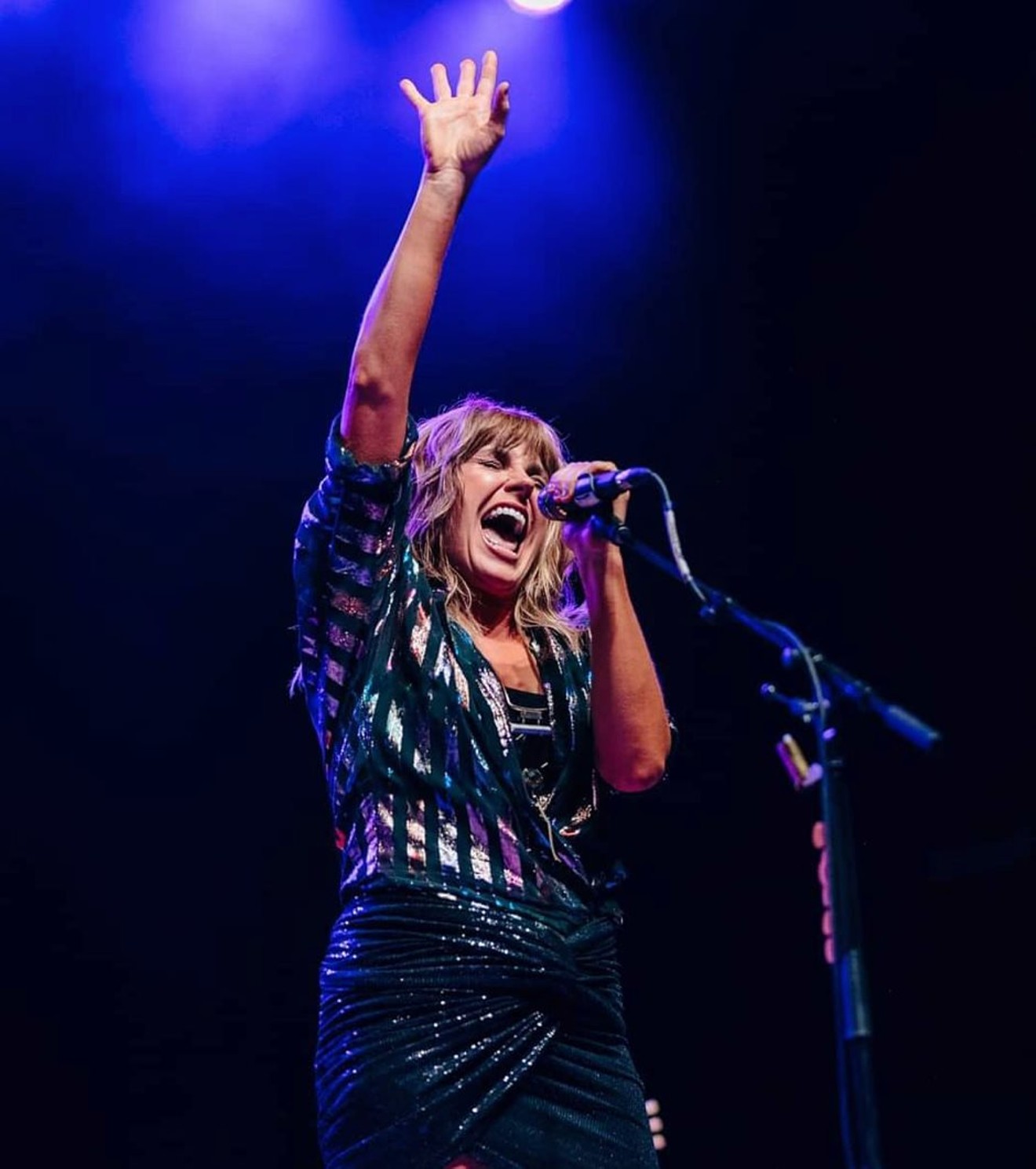 The Grammy-nominated rock, blues and soul singer, who co-founded the rock band Grace Potter & the Nocturnals, still throws one or two Nocturnals staples into her solo sets, including the 2007 smash “Apologies.” Courtesy of Grace Potter Official Facebook
After a four-year hiatus from recording and performing, Grace Potter re-emerged with a rekindled spirit to share new music with her fans. In 2019, she released her current solo album, Daylight. The eleven-track offering, rooted in solid bluesy folk-rock, soul and some country, earned positive press and two Grammy nods for Best Rock Performance and Best Rock Album. Her life was on a high note. She followed up the success of the release with her Daylight tour, playing to packed venues.

Barely two legs into the tour, the pandemic hit, and Potter’s shows were abruptly canceled, including her stop at the Mission Ballroom on March 28, 2020.

“It’s emotional, you know?” says Potter, calling from her farm in Vermont. “I had just come out on tour after a break from music. The band was rocking live. I just couldn’t believe that music was something that would be taken away. I didn’t realize how much I needed it as a therapeutic force until we couldn’t do it.”

During the first months of the pandemic, Potter launched a weekly livestream series from her then-home in California's Topanga Canyon. During what she dubbed the Monday Night Twilight With Grace Potter, her Facebook and YouTube acoustic performances gave fans sneak peeks of new material and allowed them to make requests. “It was like watching ‘I love Lucy,’ but without a script,” she says, chuckling. “It was casual. There wasn’t a set designer or any choreography; my baby [her son, Sagan] was naked in the background. But it was great. I was able to communicate with my fans a lot more. And I felt they got to see more of the real me.”

As soon as it was COVID-safe, the Vermont native, got on a plane with her husband and record producer, Eric Valentine, and their two-year-old son and flew to her home state to be close to family and buy a 120-acre farm.

Potter continued airing her Monday livestreams from her Vermont home, but was itching to get back on the road. “I was suffering from a bad case of blue balls," she recalls. "So the moment experimental, socially distanced outdoor shows were discussed last summer, I was like, ‘I will totally be that person to do them.’ And I was the very first performer at some of these venues.”

With a pickup truck towing a trailer, Potter — along with her family — traveled to play a series of solo-acoustic drive-in shows for a few hundred people in their cars at each performance. The mini-tour began with Northeast dates, and then pod-style concerts were added across more states.
click to enlarge

Mask on, Potter gets ready to play a socially distant pod-style concert in April 2021.
Courtesy of Grace Potter Official Facebook
“With all of these concerts that have unfolded, I have really indulged in my own creative journey with the audience in a new way that I never would have done if the pandemic hadn’t happened,” Potter says. “Oddly enough, it’s created an intimacy that I didn’t have with my fans before. Now I do a lot more talking and can get through more songs because I can stop in the middle of one, go into another song, then go back to the original one instead of sticking to a pre-set set list. I can be completely unbridled.”

The unique experience of performing to an audience sectioned in pods has been what she calls “a delicious journey, because [the shows] are singular and exquisite."

“These pods are full of life, excitement and electricity. You can see people who have come with their own hopes, with what they want to hear, or what kind of night they’re hoping for. There is also this phenomenon of seeing music be a re-connector for many people. When I’m looking out into the audience, I’m seeing stories unfolding of people who haven’t seen each other in over a year. It’s really beautiful, because emotion is the underbelly of all humankind. And I pull from that on stage.”

Potter, who plays a Flying V guitar and Hammond B-3 organ, co-founded the now-defunct band Grace Potter & the Nocturnals with her former husband and Nocturnals drummer, Matt Burr. She says she still throws a throwback radio staple or two into her set lists, sometimes the searing Nocturnals ballad “Apologies.”

The song rose to fame in 2007 and made the rounds as a popular TV score, featured on shows like “All My Children,” “One Tree Hill” and “Brothers & Sisters.” Concert-goers continue to request it at her shows, and though it’s not always a part of the set list, Potter happily obliges. “If it’s not in the plans to play it, it will fall on the night where there are three people with tears in their eyes, screaming for it,” she says.

Other material that has fans vying for more includes the Nocturnals’ Billboard singles “Paris (Ooh La La)” and “Stars,” and cuts off Potter’s Daylight record, including the slow rocker “Love Is Love” and the funk-fused “Back To Me, both top-thirty charters.

“First, it harks back to my early days as a songwriter before the Nocturnals, because I was just a solo artist," she says. "It was me hauling my gear into cafes, arts and craft shows, and farmers' markets. And I had this weird, lucid confidence as a fifteen-, sixteen- and seventeen-year-old kid doing that. I trusted myself more back then. I knew who I was. I had a vision of how my life was going to go. And the Nocturnals was not part of that vision. That happened, and it caused my life to take a turn — a beautiful turn. But I’ve really enjoyed getting back to playing solo. And for the first time in a really long time, I feel I have that confidence back of who I am.”

Potter, whose collaborators count Kenny Chesney, the Flaming Lips, and the Rolling Stones among them, wrote a slew of new songs during the pandemic — three albums’ worth.

“I’ve been writing a lot since COVID started," she says. "And what’s interesting is, these albums are all different from one another: one record has an aggro, heavy vibe, the second is much more folk with a Joni Mitchell feel, and the third has a Tom Waits lean.”

With no set plans to launch any of them yet, Potter has released a beautiful bluesy and apropos song about hope and perseverance during the pandemic titled "Eachother."

Produced by her husband, Valentine, who’s also tracked albums for artists like Queens of the Stone Age, Slash, and the All-American Rejects, “Eachother” — which took only five minutes to pen — includes longtime friend Jackson Browne along with Marcus King, and Jess Wolfe and Holly Laessig of Lucius.
click to enlarge

Grace Potter returns to headline Red Rocks Amphitheatre this Wednesday.
Pamela Neal
“Shortly into the pandemic, I wrote ‘Eachother’ while watching my husband and son trying to fix this broken train. And I had this overwhelming feeling of gratefulness that was so powerful that I recorded the song in my voice memos,” Potter recalls. “I sent the song to people in my phone book, including Jackson, who is my go-to songwriter person. When I write a song that I maybe am struggling to finish, I always ask myself, ‘What would Jackson do?’ Well, he would go make a pot of tea and go back to working on the song.’ So he listened to it. He Jackson Browned it by taking the note lower towards the last part of the song. And I love what he did with it.”

Potter may debut some new songs at her Red Rocks show this Wednesday.

“I’m really excited to perform in a venue that still exists post-pandemic. For a lot of the venues I’ve played, stages are being built really quickly. Somebody ships in a big scaffolding to try to make it look like a place where concerts were played at. But Red Rocks is the real deal. It’s going to be the same stage, the same seating, the same sound system. It’s also my first large concert since COVID-19. I really feel like I’m coming home.”

Grace Potter plays Red Rocks Amphitheatre on Wednesday, June 16., at 8 p.m. Tickets start at $55 and are available on the Red Rocks website.
KEEP WESTWORD FREE... Since we started Westword, it has been defined as the free, independent voice of Denver, and we'd like to keep it that way. With local media under siege, it's more important than ever for us to rally support behind funding our local journalism. You can help by participating in our "I Support" program, allowing us to keep offering readers access to our incisive coverage of local news, food and culture with no paywalls.
Make a one-time donation today for as little as $1.