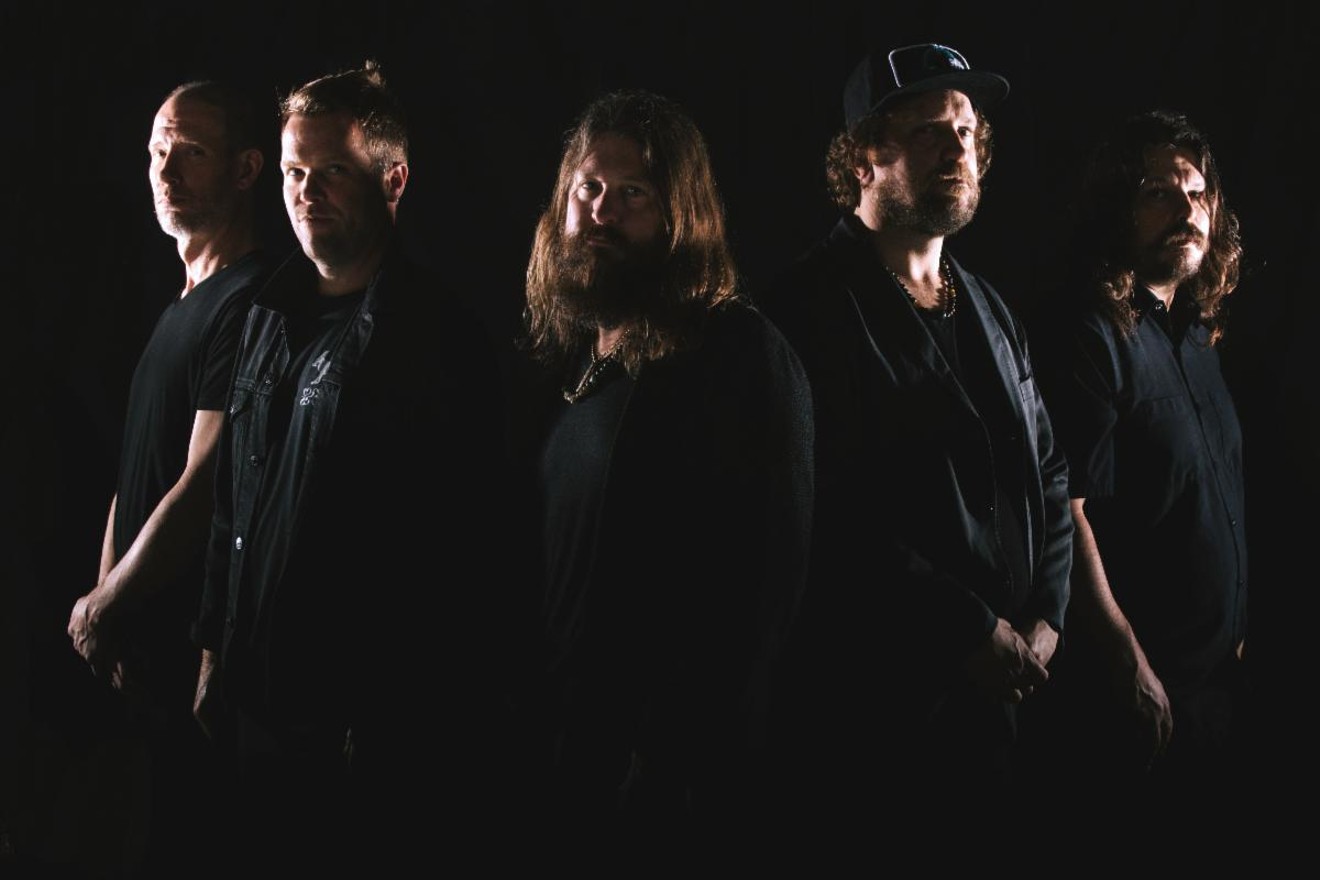 "Our first time there was in 2013, and then we played a couple three-night runs, and then a two-night run at least once," Hoffman recalls. "I'm not sure of the exact number, but it's been quite a few times now, which is incredible. I still don't take it for granted — it's a special place. These Red Rocks events are our biggest shows."

The band's Red Rocks count will climb even higher after it performs this Friday and Saturday, September 16 and 17, in Morrison, which is a short drive from Hoffman's home in Wheat Ridge. "When I'm in Denver, I get to sleep in my own bed," enthuses Hoffman, the primary songwriter and mandolin player for Greensky. "That feels like home to me."

Greensky, which will mark its 22nd anniversary this Halloween, boasts more than 100 original compositions and has a regular touring schedule that keeps it roaming the country on a steady basis. Hoffman says he enjoys spending time in Denver when he can.

"I'm at my house right now for a quick visit, which is great," the forty-year-old musician shares. "My daughter, who is three and a half, just started preschool last week while I was away. I wanted to be here for this moment in her life. So I was home for a couple days, and now I'm headed right back to the airport to get back on tour."

The experience of fatherhood has provided some inspiration for Hoffman's songs, and he often draws from day-to-day trials and tribulations when composing.

"The simple answer to what drives my songwriting is life," he says. "I've slowed down a little on my songwriting, but I still put a ton of lyrics into my phone. I don't sit down with a guitar as much anymore, but as soon as I find some downtime, I plan to dig into all these lyrics. I'm looking forward to it. In general, I tend to write about things that are difficult to deal with, such as stress, pressure, regret, fear, etc. When I'm taking notes in my phone — which doesn't sound very romantic — I will often record something like a turn of phrase that stood out to me, and then I'll try to work that into a song. I'm not super organized about it. Sometimes I make a list of subjects that I want to address. When I sit down to write, I review my notes. If I'm able to work something up on an instrument, I'll record it. I'll capture a verse, or a chorus or two verses, and then come back to it later.

"Often I'll listen back and go, 'Okay, what is this about?' Then I'll realize that it reminds me of a theme that I was working on, and I'll go back to my notes and find those ideas to get the extra verses," he continues. "I've heard [bandmate Anders Beck] say that I write the best third verses of anyone, which is awesome, because the third verse is the most calculated. I'll connect really separate ideas; I'll write about being really tired and driving my van, but then I'll connect that to how hard it is to accomplish my goals. Somehow the metaphors tie up. I'm usually writing about a feeling, so regardless of the specific imagery that I record, I can connect it to another time when I had that same feeling. My choruses can be about something entirely different than what the rest of a song is about, but it's a process that works for me. It adds a depth that's unique. I'm not sitting down and writing linear songs. This is all subject to exception, of course, but I try to do whatever works."

Judging from audience reactions, the outfit's original efforts have paid off. While the band stopped playing the well-appreciated cover songs it's known to perform for three months last winter, Hoffman and his bandmates have begun to slowly incorporate covers again in their sets. He estimates that Greensky has more than 400 songs on its running list of cover material, with tunes by everyone from Pink Floyd to New Grass Revival.

"We're always trying to do new stuff," Hoffman says, "whether it be recording a new album or playing abroad or just something we haven't already done. Among other things, we just completed a tour with the Wood Brothers. It was kind of a new approach, where we played a bunch of summer shows that weren't attached to bigger festivals. We were kind of doing our own thing as opposed to just being part of the festival scene. We played some cool new venues back east and even played a show on the beach in New Jersey. We did our first animated video this year, too, as part of our Stress Dreams album release. That was super cool."
Greensky Bluegrass will be supported at Red Rocks by Kitchen Dwellers on Saturday evening and the Jennifer Hartswick All Stars on Friday.

"We had been asked by the fans to do something with [Kitchen Dwellers] for a while," says Hoffman. "And it's finally coming together where they can join us at Red Rocks. We've also got Jennifer Hartswick, who has put together a project for the first night. We wanted to include some musicians we like and admire, and so Jennifer put together a project that we're excited for people to see. It should be pretty fun and special. [The keyboardist] Holly Bowling, whom we consider to be the sixth member of our band and we play with frequently, will also be part of [Jennifer's] group. She'll likely join us for a set, too."

The influence that Greensky Bluegass has had on rising musicians in the world of jamgrass is only just becoming apparent. Banjo player and vocalist Torrin Daniels of Kitchen Dwellers says his group was directly impacted by Greensky when the fledgling band started out in Montana.

"We first met them when we opened for a gig that they played in Bozeman while we were still in college, back around 2013," says Daniels. "We've always looked up to them as pioneers in our weird bluegrass scene. They played a lot of things that were right up our alley when we were growing up, and we listened to them a lot. Then Anders was kind enough to contribute to a track on our first album, Ghost in the Bottle [2017]. After that, we'd hang out with them whenever we crossed paths. We had Paul up on stage with us earlier this summer."

Kitchen Dwellers, which began its musical journey back in 2010, takes its name from the cozy location of the group's original jam sessions: the kitchen of bandmember Shawn Swain's home.

"The kitchen at Shawn's house was the only place that was big enough to hang out in at that time," Daniels recalls. "When we were brainstorming ideas for the band, the name popped up. It wasn't intended to stick, but sometimes a silly name can work out well."

Daniels says the group is inspired by a broad variety of sources aside from Greensky.

"Our mandolin player [Swain] is from Telluride, and his parents are Deadheads, so he's into the Dead and bluegrass in general," he relates. "Our guitar player, Max, is originally from Chicago, and he draws from the pop music of the ’60s and ’70s, stuff like the Beatles and Stones. Joe, our bassist, is from Alaska. He grew up playing the upright bass in folk bands, but he was also part of the electronic-music scene. He loves Pretty Lights. That influence comes through in his playing and effects and stuff. I grew up on a ranch in Montana, so I came up with a lot of Western and cowboy music. When I started to develop my own taste, I got into a lot of punk rock and metal, too. That's also part of our sound, mostly in the way I sing. But, yeah, we listen to just about everything."

Saturday will not be the first time Kitchen Dwellers has played at Red Rocks. The band opened for Twiddle and Pigeons Playing Ping Pong there in 2019, though Daniels feels that the pairing with Greensky is closer to his group's style. He says he's always happy to be in the Centennial State.

"We tour in the state of Colorado a lot," he says. "People just roll out for music, and they're always excited to see us. I love playing here. It's a hell of a time."

Greensky Bluegrass, Red Rocks Amphitheatre, 18300 West Alameda Parkway, with Jennifer Hartswick All Stars on Friday, September 16, and Kitchen Dwellers on Saturday, September 17, 7 p.m. Tickets are $50-$75.
KEEP WESTWORD FREE... Since we started Westword, it has been defined as the free, independent voice of Denver, and we'd like to keep it that way. With local media under siege, it's more important than ever for us to rally support behind funding our local journalism. You can help by participating in our "I Support" program, allowing us to keep offering readers access to our incisive coverage of local news, food and culture with no paywalls.
Make a one-time donation today for as little as $1.