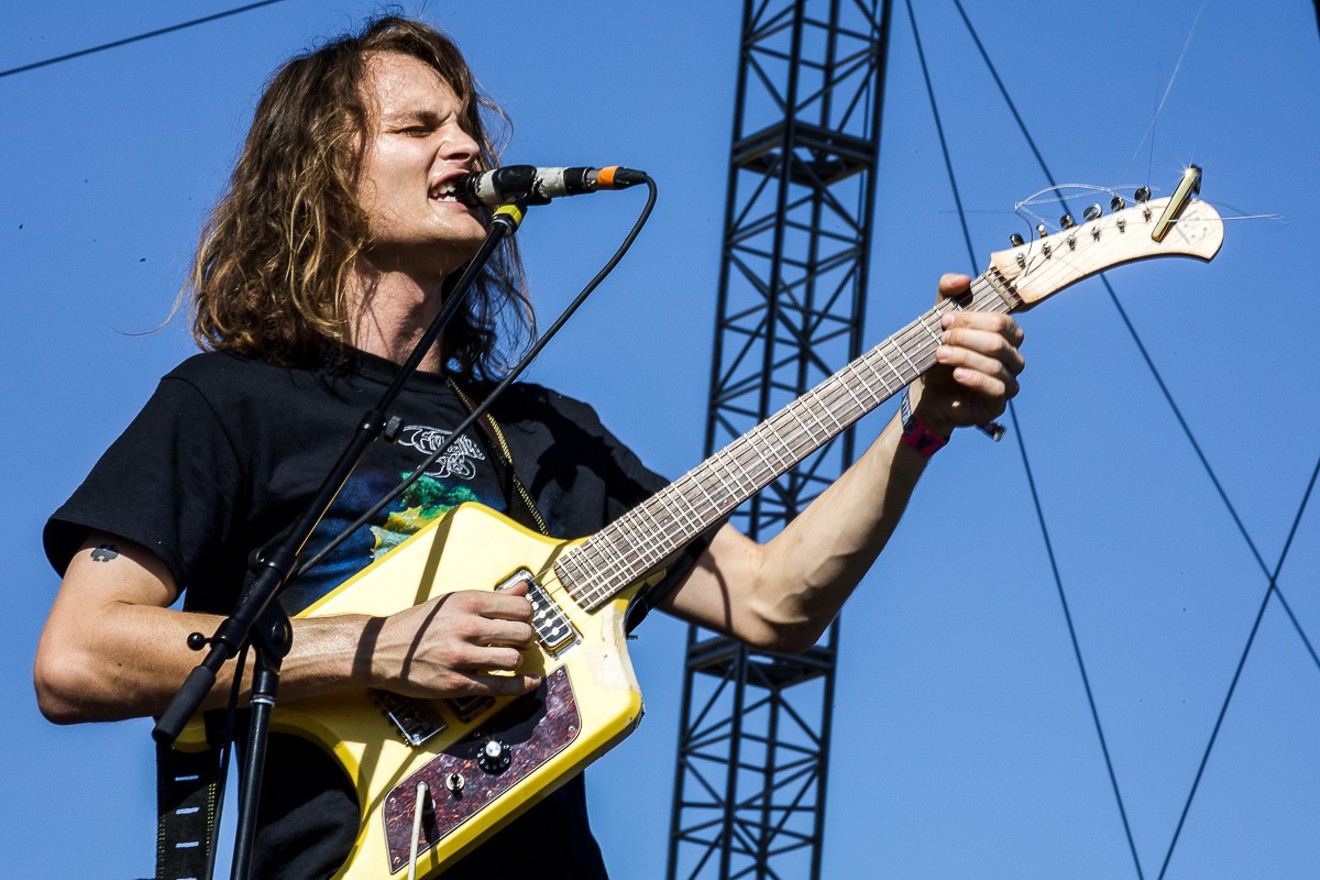 King Gizzard and the Lizard Wizard's Stu Mackenzie. Hannah Verbeuren
Earlier this month, when the New Yorker profiled Paul Tollett, the CEO of Goldenvoice and the man responsible for the industry-unto-itself that is Coachella, the magazine made a point to acknowledge that Tollett was “showing his age by continuing to headline rock bands like Radiohead.”

The youngsters, the article noted, would rather see EDM.

Anyone who witnessed the sprawling, practically endless crowd that amassed for DJ Snake’s Outdoor Stage set Saturday night — a crowd that at least seemed to dwarf Friday night's crowd for Radiohead — would feel this sentiment had been affirmed. The lineup of this year’s Coachella, far heavier on acts like Marshmello, Oh Wonder and the aforementioned Snake, seemed testament to the fact that the days of the headlining rock band — and, by extension, the guitar as the primary instrument of popular music — are on the wane. Coachella, which remains the most prominent music festival in the United States, has to at least partially be a bellwether of pervading musical sentiments.

But the guitar, of course, is far from dead — even at Coachella. And while it may not be as popular as whatever instrument makes those EDM “wha wha wha WHOOOM” sounds, there are plenty of acts continuing to breathe life into it. One act, a certain headlining rock band that, according to the mythology, gave up the guitar long ago, may even be the group providing the strongest argument for the instrument’s continued relevance.

It’s been well documented that this year’s Coachella has brought in a rare influx of local Latin music. With it came a particular way of utilizing the guitar, fostered by years of these particular bands playing together in local backyard parties and East Side clubs. Bands from Chicano Batman — which played a buzzworthy set to a big afternoon crowd Saturday — to Thee Commons and Quitapenas brought with them a nimble, soulful guitar sound. 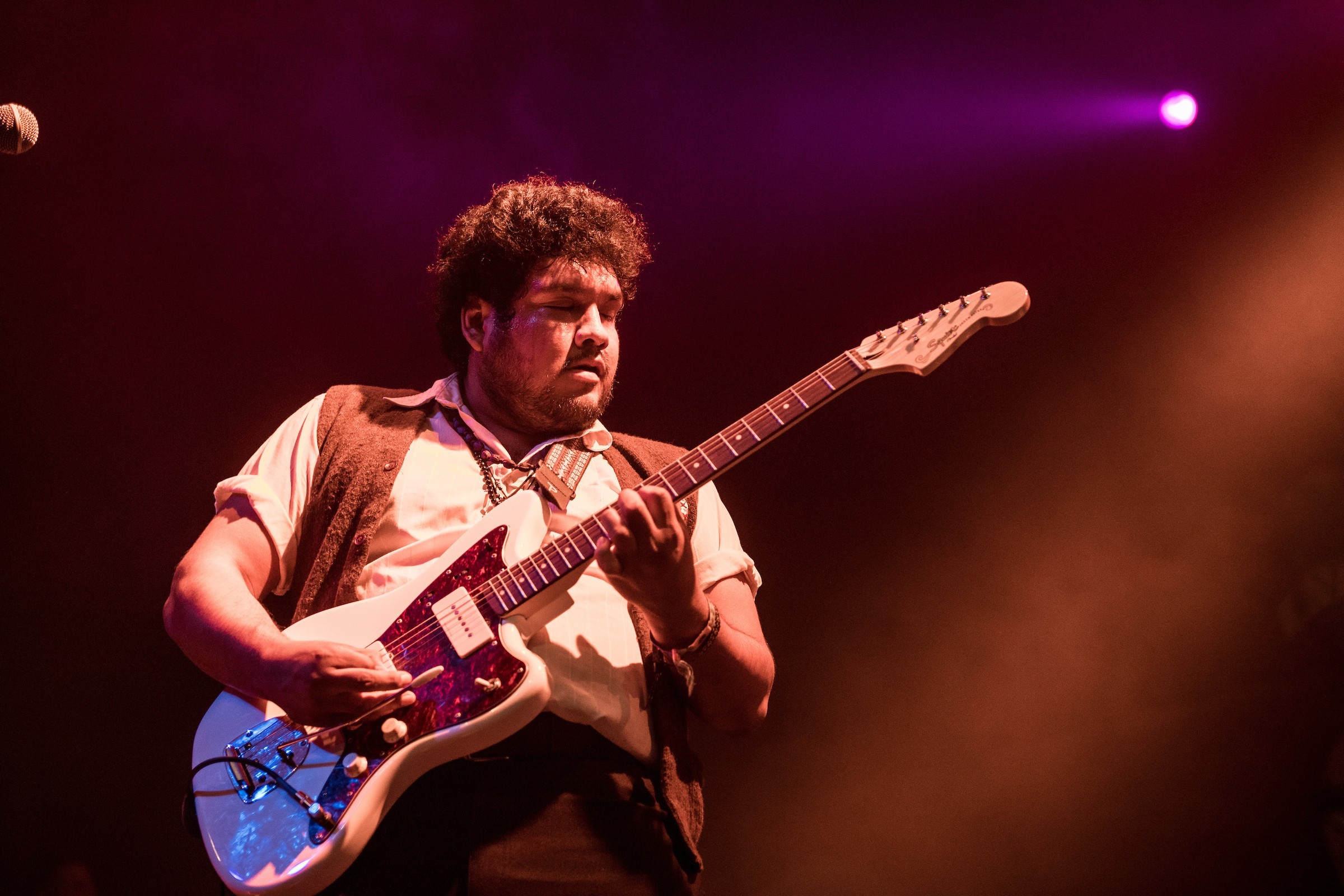 David Pacheco of Thee Commons.
Roger Ho/Goldenvoice
Chicano Batman guitarist Carlos Arevalo’s sound is rooted in cumbia and soul, clean and precise, following his band on excursions through Afrobeat, psychedelic rock and Brazilian pop. (“Cumbiachella!” as one festival-goer shouted during the band’s set.) David Pacheco of Thee Commons and Daniel Gomez of Quitapenas also look toward classic Afro-Latin styles — Pacheco specifically to reverb-drenched South American psychedelia, Gomez to the more analog dance-floor rhythms of Colombia, or Benin. Both bands, which played the new, guitar-heavy Sonora Stage, look to their immediate surroundings for the most inspiration. Gomez, when I ask who he listens to, cites Kevin Martin from Brainstory and Jorge “Yuka” Vallejo of Buyepongo, both hard-gigging L.A. bands with heavy Latin influences.

Stu Mackenzie of King Gizzard and the Lizard Wizard took the stage Friday wearing a Yes T-shirt — appropriate, given his knack for leading his Melbourne band through fast, proggy passages.

On the surface, King Gizzard might seem like a garden-variety psych-rock band, and it's often lumped in with other Australian sonic wanderers like Pond and Tame Impala. But King Gizzard straddles a line between rock traditionalism and experimentation that’s totally distinctive. Mackenzie’s best guitar parts aren’t solos, per se, but melodic runs interwoven with his songs. King Gizzard jams are less a platform for noodly soloing than they are groovy and rhythmic, beating against the gnarly backbone created by the band’s two drummers.

That element feels even more powerful since the bandmembers adopted microtonal tunings, modifying their guitars so they can play tones that sound in between notes on the conventional Western scale. If there was a truly transcendent moment in the band’s set, it was when all three guitar players droned together on the microtonal riff from “Billabong Valley.” The sound took on a massive, incorporeal quality; eyes rolled back in heads; the mosh pit momentarily stopped moving. 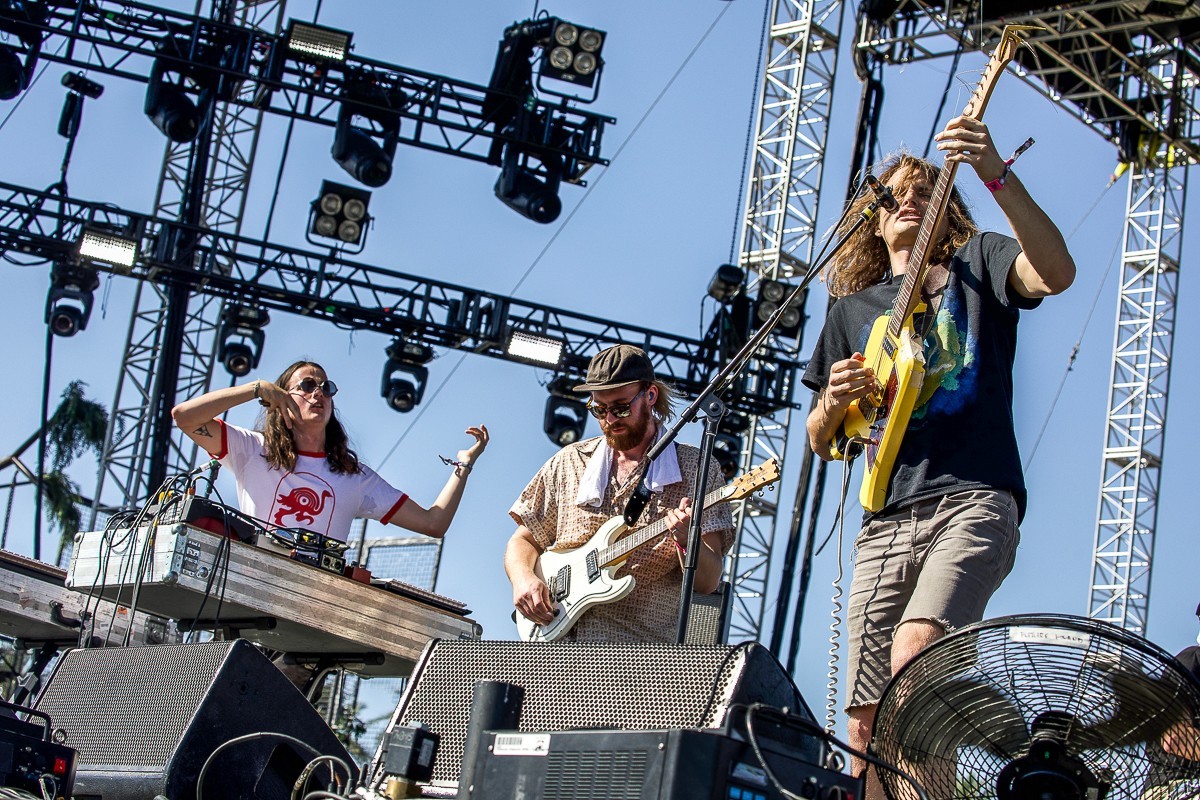 King Gizzard and the Lizard Wizard.
Hannah Verbeuren
Elsewhere around Coachella, guitars are mostly used as a prop. The Avalanches — whose set was earnest, joyful, delightfully energetic — were set up like a rock band, with guitar, bass and drums. But the guitar was a set piece, included as though they felt they needed it to be dynamic on stage, but didn’t need it to say anything.

Same goes for Father John Misty, whose acoustic guitar gets strummed plenty but goes more toward augmenting his “Death of a Ladies Man” image than anything else. Future and Lady Gaga both have guitar players, but, for the most part, it was hard to tell if they were doing anything at all.

For The xx, the sound of the guitar is crystalline; it sparkled and rang through the palm trees that lined the festival grounds. But it is producer Jamie xx who is the anchor of the band; it is his beats and samples that define the sound. If anything, Romy Madley Croft’s guitar feels vestigial — a nod toward the traditional band format from a group whose music is more defined by electronic R&B’s synthesized heartbeats.

At least one band at Coachella managed to use the guitar in ways both unprecedented and unexpected. Jonny Greenwood’s guitar punctuated many of the best moments in Radiohead's Friday night headlining set, whether grazing the edges of "All I Need” or rattling like a bolt in a dryer on "Bloom." On a particularly dark, ugly “Ful Stop,” Thom Yorke practically collapsed in anguish as he admonished someone, perhaps himself, “You really messed up everything.” Meanwhile, Greenwood’s guitar cut into the song like a knife, painful to the touch, expressive in a way the track's samples and synths were not.

Radiohead stopped being a conventional guitar-rock band in 1997. But on Friday night, the musicians showed that in the midst of all the other sounds they’ve incorporated into their music — the drum machines, the analog synthesizers — Greenwood's guitar not only continues to find its place in the mix, but finds itself taking on new modes of speaking. Guitar may no longer be the centerpiece of their sound, but that hasn’t made it any less vital. 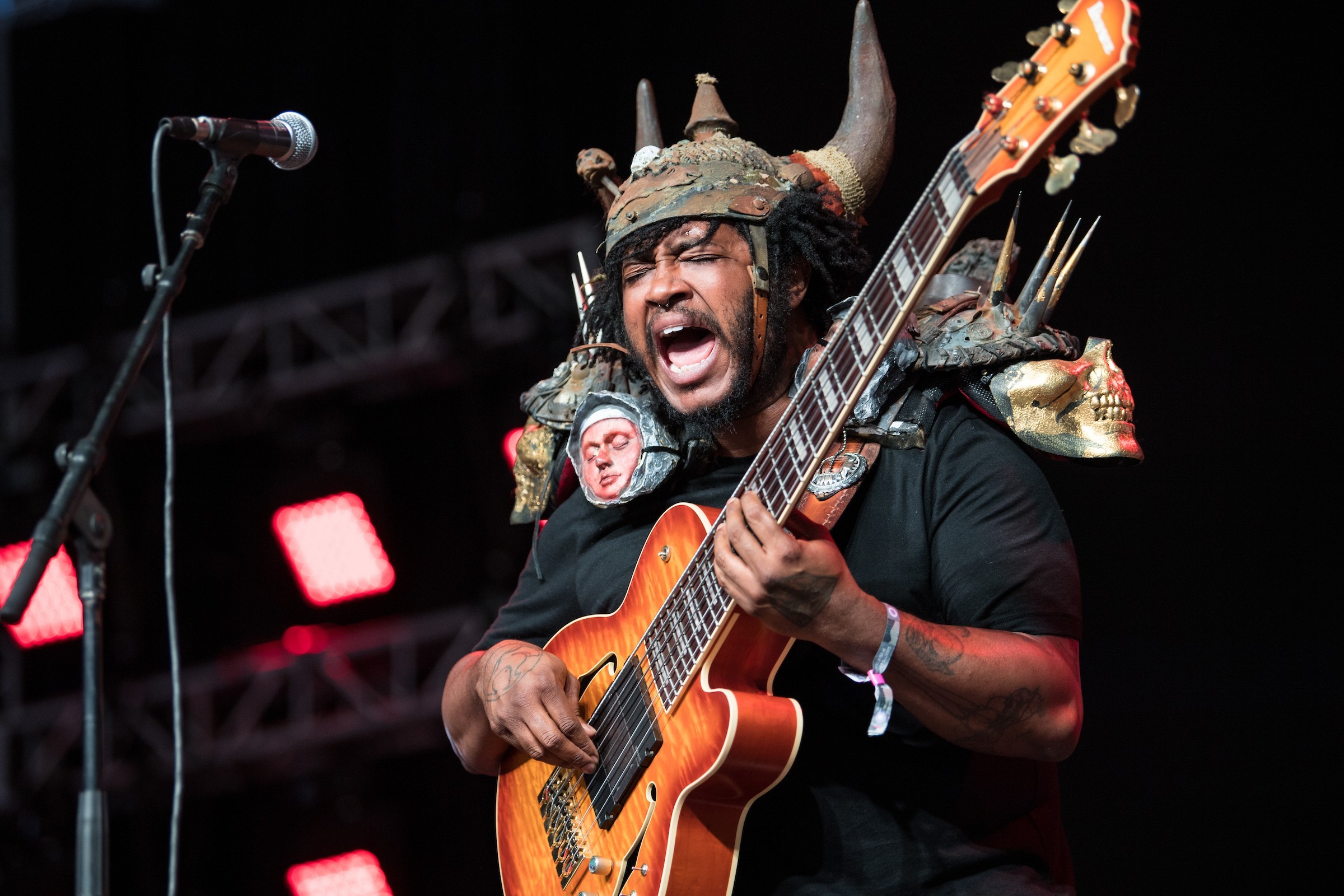 Thundercat
Roger Ho
As brilliant as Greenwood was, there was only one true guitar virtuoso at this year’s Coachella — and, ironically, he’s not a guitar player. Stephen “Thundercat” Bruner's bass playing is as thrilling as any guitar pyrotechnics, a jazz-fusion fireworks show that pairs perfectly with his George Duke-inspired vocals. That was particularly true when, as during his Saturday evening set, he went toe to toe with his small band (just keys and drums), or a similarly gifted guest (Reggie Watts sat in on “A Fan’s Mail (Tron Song Suite II)").

Virtuosity didn’t seem to belong anywhere at Coachella except on Thundercat's stage at that moment. And it seemed fitting, too, that a hip-hop label — albeit a highly adventurous one, Brainfeeder — had launched the career of the only virtuoso at the biggest music festival in America. It was hip-hop, after all, that took guitar rock’s place as the popular genre most accommodating to virtuosos — those who rock a microphone rather than six strings.