The building that houses the Church nightclub is more than a century old. Jon Solomon
On December 29, 1996, two days before Regas Christou was set to open The Church, his nightclub inside the 132-year-old St. Mark’s Church at the corner of 12th Avenue and Lincoln Street, a bartender told him the roof was on fire. Christou headed upstairs from the basement, heard a crackling noise and saw the flames. He says a roofer had accidentally started the fire.

“We go up to the roof, and the guy's standing over it, trying to put it out with his shirt,” Christou says. “We almost threw him off the roof. I was so pissed off.”

Because the heat was coming from the top of the building, the sprinkler system hadn't gone off. After Christou and some of his staff tried putting out the flames with extinguishers, they called the Denver Fire Department. By the time firemen showed up, Christou says, the fire had traveled through the rafters and the entire roof was bubbling.

The news of the fire spread quickly, and friends came to help clean the place up.
click to enlarge “These people showed up with their kids — friends of mine — with wet vacuums and cleaning brushes and all that stuff," Christou says. "It was one of the most emotional roller coasters I’ve been through in my life.”

Christou, who also owned the Deadbeat Club and 1082 Broadway (now Club Vinyl) and a few other restaurants and bars around Denver at the time, had spent about three years renovating the Church. It had needed a new sewer system, as well as a new electrical system, air conditioning system and sprinkler system. The bars were made from the church’s pews.

“We started from scratch, basically,” Christou says. “But the main thing was to not fuck up what was already here. That was the biggest concern of mine, because my mother was alive then, and when I told her I was going to do a club in a church, she thought I was crazy — she actually slapped me. But I promised her I was going to respect what this is. That was the hard part. It’s easy to take a space, tear it up, put in a bunch of lights and a sound system and call it a night.”

As the renovation was nearing completion, Christou was running out of money. He started advertising in November for the club’s New Year’s Eve grand opening, and in two weeks sold 1,000 tickets at $100 apiece.

Christou needed to open on New Year’s Eve or that ticket money would be useless. About a hundred people came to help after hearing about the fire damage. They worked two days straight, from the evening of December 29 until about 7 p.m. on New Year’s Eve.

After the cleanup, Christou says, he went home to change, and by the time he got back, there were 1,000 people who had already purchased tickets on one side of the building, and another 1,000 who hadn’t bought tickets but were still hoping to get in.

It was a whirlwind of a beginning for the Church. Christou says the city had never seen anything like the club before or heard a sound system like the one installed there.

“It was a lot of tears and a lot of crying, because you finally accomplish something that you've been dreaming [of] for a long time,” he recalls.

He’d been thinking about opening a nightclub since the ’80s, when he started collecting things he thought might work in his vision, including a chandelier. Although it took Christou some time to finally realize that dream, he’d also been busy with many other spots around Denver, starting with Regas Mediterranean Cafe, which he opened in 1982 and turned into the Deadbeat Club a decade later.
click to enlarge 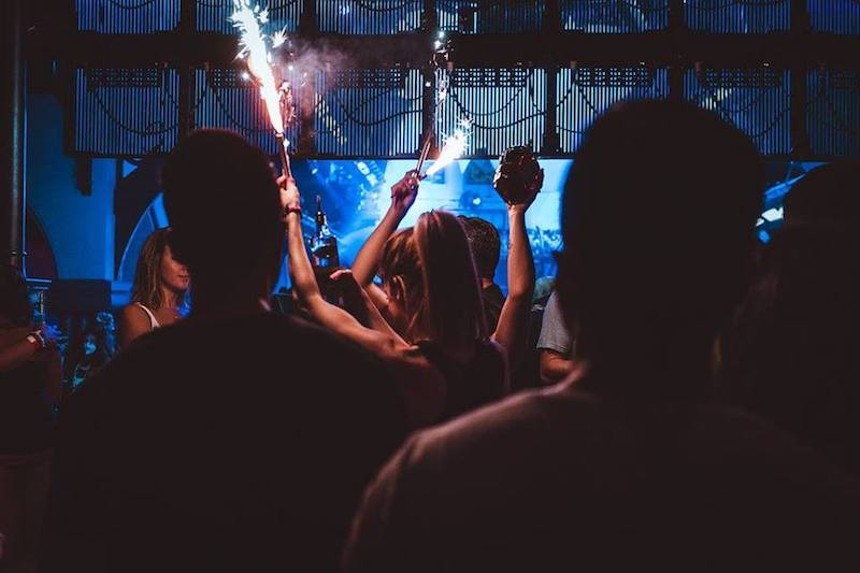 Opening the Deadbeat Club catapulted him to the next level with its cash flow, Christou says. He opened 1082 Broadway in 1993, and was quickly becoming Denver's club king. His CoClubs company now includes the Church, Vinyl, Bar Standard and Milk, as well as the Acoma Street Project and outdoor venue Lincoln Lots; he says he’s owned 27 places since 1982. Some of those spots have closed — Funky Buddha, City Hall, the Living Room and the original Roo Bar — but others have morphed into new concepts, with 1082 becoming Club Vinyl and Serengeti turning into Bar Standard.

Now, at 69, Christou is gearing up for two new projects that he says will be his final two venues, slated to open next summer. They won’t be near his other clubs in the Golden Triangle, but he says they'll be in Denver and will include ample outdoor areas.

“You never know how long this pandemic is going to last,” he points out. “I would be an asshole to allow this shit to defeat us. I have great employees who have been with me for ten, fifteen, twenty years, and some of them even longer. They are the best at what they do. We are the best because my employees are the best.”

CoClubs employs about 290 people now, and Christou says that number might get closer to 400 by the end of next year, after his new places open. Over the past few decades, he's gotten some help from his sister Maria and brother Christakes, and other family members have helped run his venues.

In the early days of the Church, Brad Roulier and Jonas Temple (who would both go on to found Beatport in 2004 and open Beta before selling it in 2020) were brought in to book nationally known DJs.

The Church is celebrating its 25th anniversary on New Year’s Eve with a number of artists on the Desert Hearts label, including Lee Reynolds, Marbs, Mikey Lion, Porky, Juan MacLean and others. The club has showcased many world-class DJs since opening on the last night of 1996, and many celebrities have stepped foot in the club, among them U2 frontman Bono, members of Metallica and professional athletes. Some scenes from Strangeland, a 1998 horror film that Twisted Sister frontman Dee Snider wrote and starred in, were also filmed at the Church.

Prince even played a late-night show there with Chaka Khan after performing at Fiddler’s Green Amphitheatre in 1997. Christou says that Prince’s show was one of his best memories of the club. He had to get a special permit from the Denver Department of Excise and Licenses for the club to be able to stay open until 6 a.m.

Even though the Church has had some big-name visitors over the years, Christou says it isn’t necessarily an “in-your-face” club with a lot of flash.

“It’s our lifestyle,” he says. “We don't live flashy. We just don't. We are who we are: I respect everybody that comes through the door. My customer might have five bucks, he may have twenty bucks; I don't care. I’m going to treat him the same.”

He also notes that while every denomination has its own church, this one is open to all.

“Basically, what is a church?” he asks. “It’s a place to feel safe and go spend some time with friends. Spirituality was a big part of what I was doing, too, and a connection. And for me, that connection was that I created a church for basically everybody — Muslims, Jewish, Greek Orthodox, Catholics, Protestants, Episcopalians. This is a place to replace that part of your spirituality.”

Desert Hearts NYE Takeover, ft. Lee Reynolds, Marbs, Mikey Lion, Porky, Juan MacLean and more, and the Church’s 25th anniversary, 8 p.m. Saturday, December 31, The Church, 1160 Lincoln Street, $25-$35.
KEEP WESTWORD FREE... Since we started Westword, it has been defined as the free, independent voice of Denver, and we'd like to keep it that way. With local media under siege, it's more important than ever for us to rally support behind funding our local journalism. You can help by participating in our "I Support" program, allowing us to keep offering readers access to our incisive coverage of local news, food and culture with no paywalls.
Make a one-time donation today for as little as $1.