Winter on the Rocks founder and director Sam Warren (left) with Luis Benitez (who was the director for the Colorado Outdoor Recreation Industry Office at the time) and Icelantic Skis founder Ben Anderson in 2018. Gabriel Rovick, F4D
Sam Warren has endured a few nail-biting moments over the last decade since founding Icelantic’s Winter on the Rocks, an annual tradition at Red Rocks Amphitheatre that coincides with the Outdoor Retailer Snow Show (formerly SIA) in Denver every January.

One such moment took place before the third installment of Icelantic's Winter on the Rocks, on January 31, 2014, when Ghostland Observatory and Jurassic 5 were slated to perform. A snowstorm had come in the night before and covered the venue in white stuff. When Warren arrived the morning of the show, he remembers there were close to five inches of ice topped with about five inches of snow. He sat at the top row of Red Rocks, put his hands to his head and thought, “I don't know how we're going pull this off.”

Warren, who was one of the first five team members of Icelantic, says he began thinking about one of the main reasons the Golden-based ski company hosts these outdoor shows in the middle of the winter: to give back to the Colorado snow sports community.

“In times of need, you've just got to reach out to your family and your friends and your community,” Warren says. “So I put a social media post up and just said, ‘Hey, listen, we got some snow last night. The first 100 people who get here and help shovel us out, tickets are on us.' It was amazing. Within thirty minutes, there were 100 people there. I think we even had to turn away about fifty people.

“The whole venue was completely clear within two or three hours, and people were having a blast with it. We see it over and over again: The snow sports community, Colorado community, the live-music community in Denver...we're really lucky to live in such a great space and live around people who are always willing to lend a helping hand.”

Ghostland Observatory and Jurassic 5 ended up taking the stage that night, making it just the third winter concert ever hosted at Red Rocks, which celebrated its eightieth anniversary last year. The idea for the concert had come to Warren about six years earlier, when he was in Las Vegas for SIA working Icelantic's booth. He'd heard rumors that the trade show was moving to Denver.

There was a bar at Icelantic’s booth, and Warren remembers that he was “a few tequilas deep” when he told his friend Logan Boone that if the trade show ever moved to Denver, he’d be the first person to throw a winter concert at Red Rocks. While SIA did move to Denver in 2010 after nearly four decades in Las Vegas, Icelantic initially partnered with AEG Presents to host concerts at the Ogden Theatre in 2010 and 2011, with hip-hop acts like the Living Legends and Big Boi playing.

But in 2012, Icelantic, with some help from AEG Presents and the City of Denver, which operates Red Rocks, was able to host its first Winter on the Rocks. It was the first winter concert ever held at the venue, with hip-hop acts Atmosphere and Common as the headliners.

“There was this kind of looming excitement and anxiety around the unknown,” Warren says of that first Winter on the Rocks. “I think one of the coolest things about it is that we have this trifecta of entities that typically would never work together — a local independent ski company, being myself and these young guns; AEG, these masterminds of concert production and promotion; and then the City of Denver, a governmental agency — all working together to make it happen.” 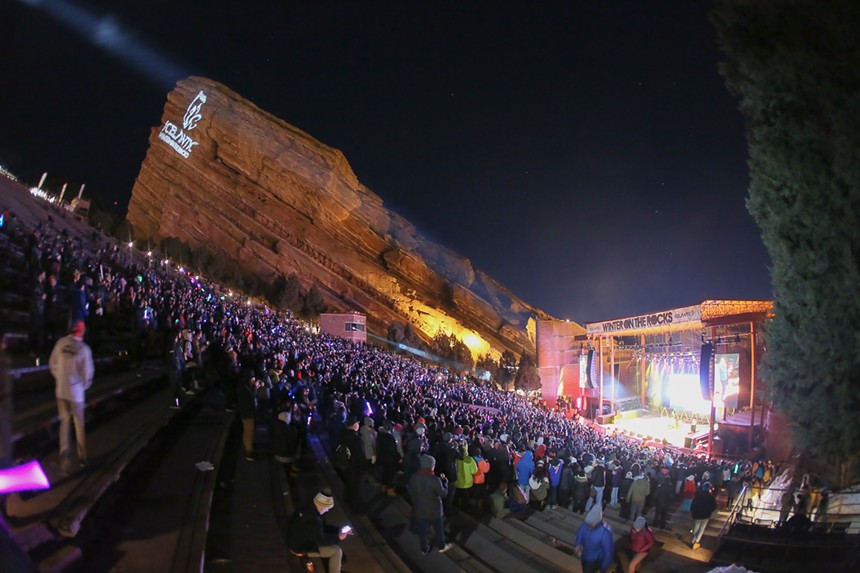 Winter on the Rocks in 2018.
Brandon Marshall
The lineup for the tenth anniversary of Icelantic’s Winter on the Rocks, set for Friday, January 28, includes Diplo, Sofi Tukker, Talib Kweli, DJ Matt Cassidy and Jacoby.

“We wanted to put together a show where people just have an absolute blast and dance their faces off all night long,” Warren says.

“We went back to one of our alumni, Diplo, who has played the show twice with Major Lazer,” he continues. “We reached out to him and were really confident that he understands the brand. He puts together an incredible show that's a lot of fun and has a lively atmosphere.”

Warren is also a big fan of Sofi Tukker and has always wanted to work with the electronica duo.

“We felt like this was the right time to bring them in,” he says.

Since Warren and a few other Icelantic team members grew up in Evergreen listening to underground hip-hop, he and AEG Presents talent buyer Adam Stroul booked rapper Talib Kweli as a way to pay homage to other hip-hop acts who have played Winter on the Rocks in the past.

While Warren says they try to make it as plush as possible for the artists by putting massive heaters on the stage, he adds that it’s been a challenge booking acts, particularly in the early years of the festival.

He notes that a number of the festival’s previous artists have become some of Winter on the Rocks’ biggest advocates.

“If we get in a position where there's an artist that we're going after and they have questions or they're feeling a little insecure about it,” he says, “we're always just like, ‘Well, you should go chat with Damian Marley, or give Atmosphere a call, or go chat with Macklemore, or chop it up with the Major Lazer guys and see what they thought. Hit up Anderson .Paak and see what he thought about it.' All those guys are saying good things.”

He adds that brand partners like Jeep, Velocity Global, Tito’s Handmade Vodka and Kleen Kanteen have also helped out with Winter on the Rocks.

“We're working with our partners to deliver them an awesome experience and make sure that they're having a great time up there and connecting with our attendees,” Warren says. “We’re also making sure that within those partnerships, we're continuing to increase the overall experience of Winter on the Rocks for the festival attendee. I mean, that's the biggest piece: We want to make sure that everybody who comes has a blast, from the second they step out of their car until the end of the show.”

While the snow sports community is used to braving colder temperatures, Warren says he and his team’s number-one objective is to make sure everybody stays safe.

“It’s a dynamic show,” he concludes. “It's not normal. We’re here to work hard this time of year, but also, celebrating Red Rocks in the wintertime is something special and something that everybody who loves that venue should have access to.”

Icelantic's Winter on the Rocks, 7 p.m. Friday, January 28, with Diplo, Sofi Tukker, Talib Kweli, DJ Matt Cassidy and Jacoby, $49.95-$99.95, Red Rocks Amphitheatre, 18300 West Alameda Parkway, Morrison, redrocksonline.com.
KEEP WESTWORD FREE... Since we started Westword, it has been defined as the free, independent voice of Denver, and we'd like to keep it that way. With local media under siege, it's more important than ever for us to rally support behind funding our local journalism. You can help by participating in our "I Support" program, allowing us to keep offering readers access to our incisive coverage of local news, food and culture with no paywalls.
Make a one-time donation today for as little as $1.