Katy Perry Roars for Kids and Queers — Mostly in Tune 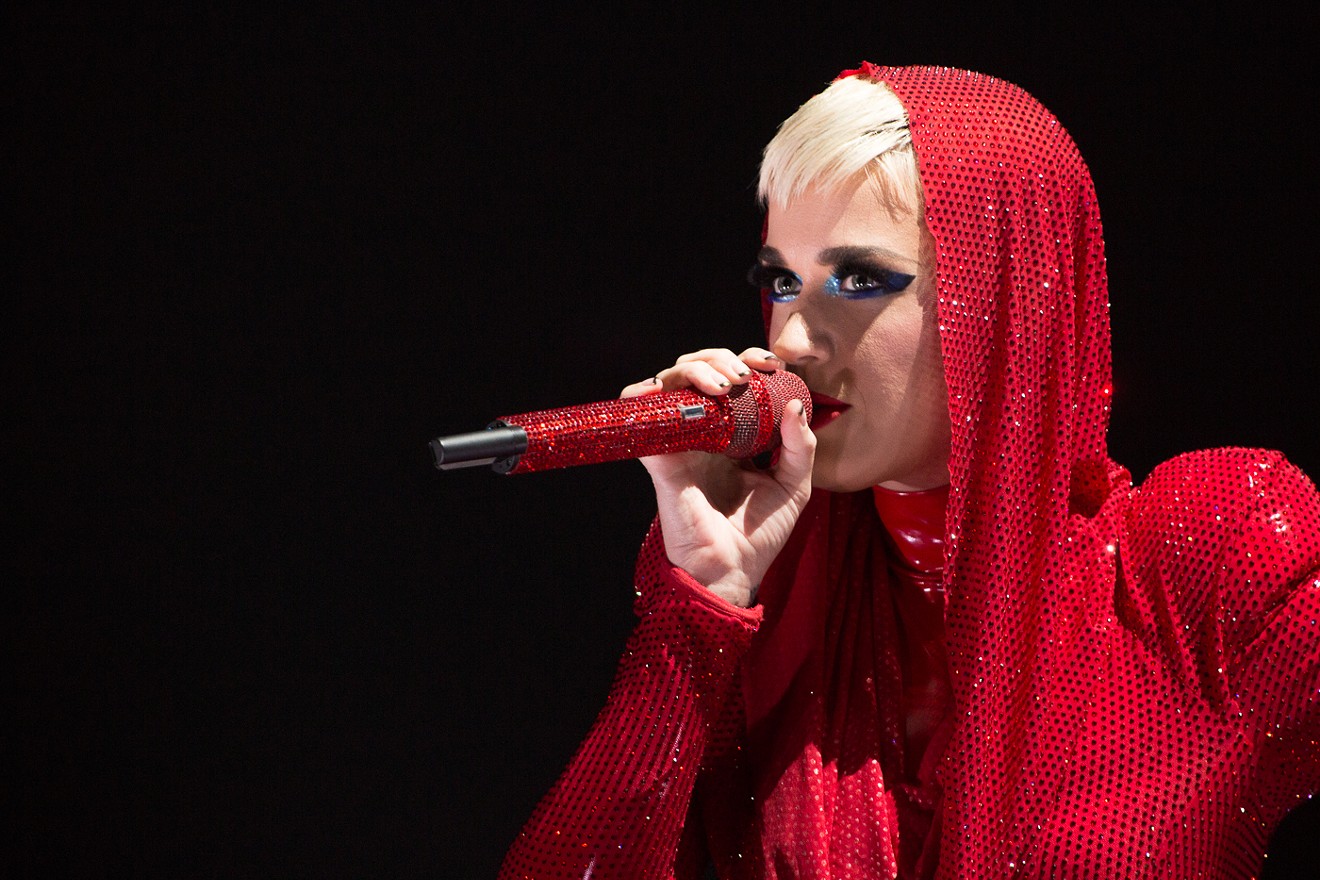 Katy Perry performed at the Pepsi Center on November 26, 2017. Brandon Marshall
Little girls smudged with makeup awoke from their Katy Perry dreams across Denver today, plotting to skip school. Their parents stumbled into work, if they didn't play hooky themselves. They’re all surely mentally hung over from Perry’s concert, so entertaining that her messages were hidden in the fun.

The November 26 Pepsi Center show started at a respectful-for-a-Sunday-night 7:30 p.m., but it didn’t wrap until 11 p.m., after two solid hours of pop-music razzle-dazzle, as Perry strutted around the stage, empowering girls and performing with her dexterous troupe of dancers.

There were fireworks; a pole dancer who could have come straight from a gay strip club; a massive set of lips that gobbled up the singer; a neoclassical stone-looking hand that she rose from and was enveloped by; a massive tiger head for the song “Roar”; a pair of dice that singers danced on; a planet she used to ride over her fans while strumming an acoustic guitar; and a ginormous basketball court where she battled in a game of hoops with a cool dad that she hand-picked from the crowd.

All over Katy Perry's concert: eyeballs.
Brandon Marshall
Inescapable were the eyeballs, a common motif in her Witness Tour (get it?). There was a massive moving eyeball projected before the show on an eyeball-shaped screen. There were eyeballs in flowers and eyeballs on beach balls. There were robots with TV heads with eyeballs in the center. They were meant to evoke that nagging sense that we’re always being watched, a logical response to surveillance culture, in which cameras record our every move and marketers track our desires.

Party kids could trip in her fantasy world. Children could understand it as Saturday-morning cartoon fodder. And the rest of us could bask in the sheer wonder — and creepiness — of it all.

Despite her first-rate show, Perry’s songs continue to suffer from pop-factory production and could use a break from that machine. (Just look at how Kesha’s split with Dr. Luke – albeit horrifying – actually improved her songs.) Maybe Perry's occasional sour note could be blamed on the Pepsi Center’s muddled sound system, a sore throat, or the altitude. Whatever it was, she mostly muscled through and thankfully did not ramble about the perils of elevation, as too many flailing out-of-state performers do.

The concert was devoid of any overt politics, which was a bit of a surprise considering how hard the singer stumped for Hillary Clinton in the last election. Armed with so many songs about power and rising up from trauma and being a champion, you’d think Perry might have something to say to her Denver fans about the toppling house of cards. Then again, maybe providing little girls with a flashy arena show and the right to party is politics enough. 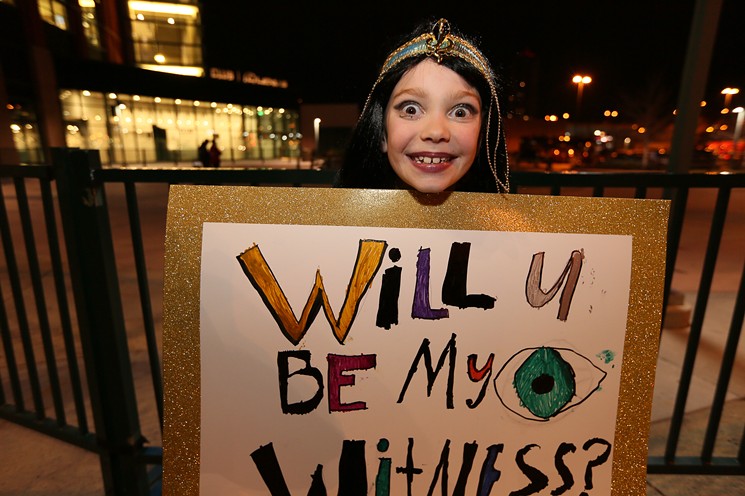 Katy Perry fans can't contain their love.
Brandon Marshall
Perry is both the girl next door and a performer quick to summon sexual liberation, magic, alchemy and mystical iconography. She goes both ways: mama's girl and witchy rebel.

Last night she called her mother from the stage and let her awkwardly lecture us about Denver history and make corny Mom jokes about weed — like, why is Denver going to lose its status as one of the country’s thinnest cities? The munchies, hardy har har. One point for the nice girls. Then she donned bondage-inspired costumes and rallied a chorus of preteens and their moms to maniacally wear out their vocal chords singing about kissing a girl and liking it. Rebel!

Having grown up in an age where the closet was status quo, I found Perry’s unabashed embrace of all things LGBTQ refreshing. She's like Madonna without so much shame. Perry’s not another Dolly Parton diva coyly pandering to the gays; she dives in head first.

Back to today: Perry's school-aged fans are suffering through class in a daze, and their parents are working on their eighth cup of coffee. Thankfully, their sacrifice was worth it. While some shows leave a crowd weary and disappointed, Perry left us with a much-needed injection of courage and pride, medicine made sweeter by her overwhelming spectacle.

Her magic worked. Her voice, in tune or not, was heard.