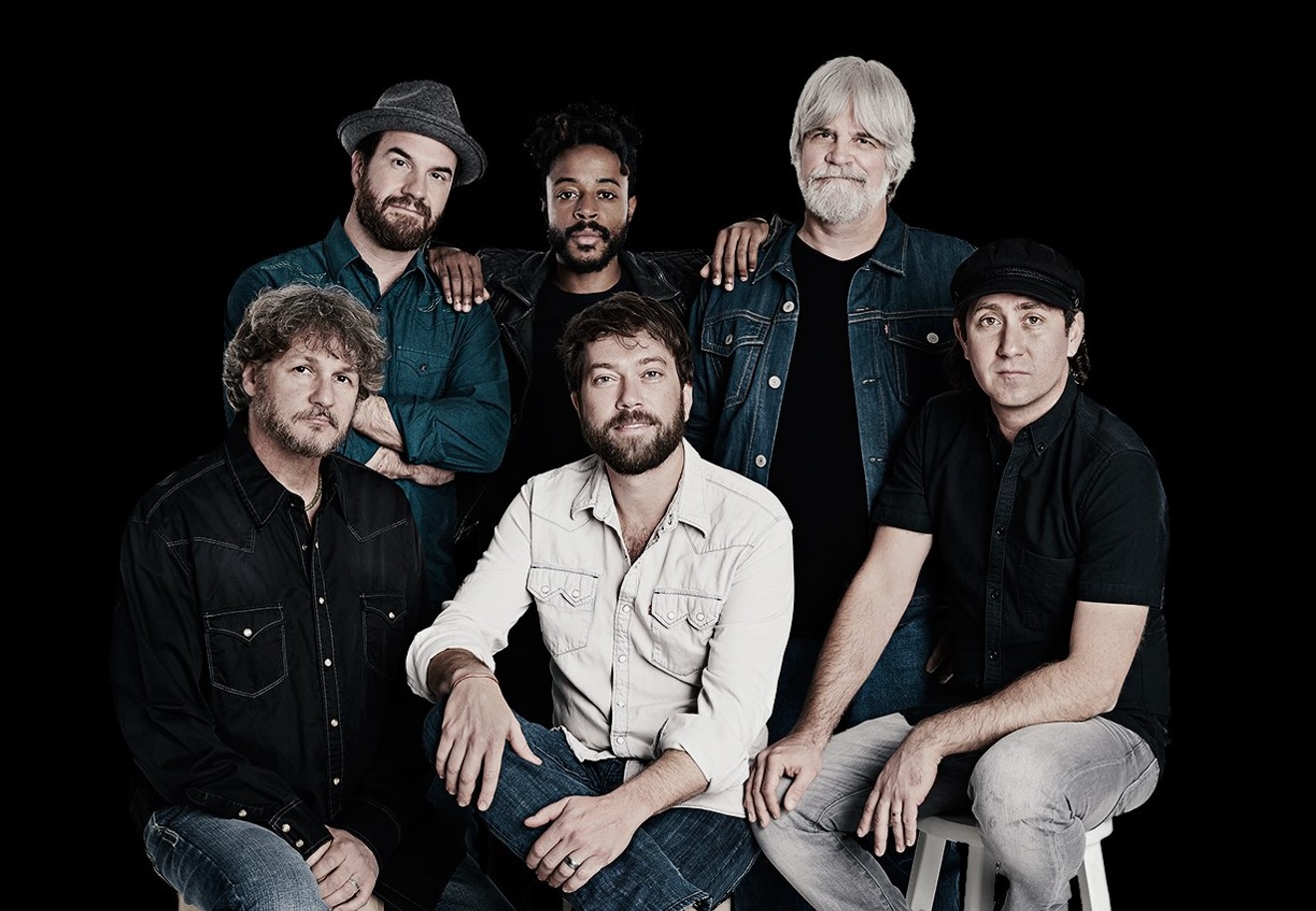 Leftover Salmon Photo by Bob Carmichael
For three decades, Leftover Salmon has paid its dues — on the road, on the stage and in the studio. Most bands don't last that long, and even fewer groups make the kind of impact that Leftover Salmon has on fans and musicians alike. The eclectic Colorado-grown outfit, which describes its sounds as polyethnic Cajun slamgrass, has been a force in keeping traditional music alive while simultaneously pushing the roots vibe forward with a unique spin.

As Leftover Salmon nears its thirtieth year, the musicians' inspiring story is told in a new book, Leftover Salmon: Thirty Years of Festival! to be released this February by Rowman & Littlefield. In the book, critically acclaimed author of Bluegrass in Baltimore: The Hard Drivin’ Sound and Its Legacy Tim Newby presents an intimate portrait of the Boulder-hatched jamgrass pioneers through the personal recollections of its various members, family, friends, former bandmates, managers and the countless musicians they have influenced.

Newby's Thirty Years of Festival plunges deep into the background of Leftover Salmon, examining the early days of its members, from Drew Emmitt's time growing up as an aspiring bluegrass musician in Boulder to Vince Herman's early roots as a zydeco-influenced rabble-rouser in Pennsylvania and West Virginia.

Thirty Years takes the reader on a wild odyssey that began in the campgrounds of Telluride and the bars of Durango and Crested Butte and later spread to the stages of Red Rocks, the Fillmore and beyond.

The text touches upon the group's quirky traditions, such as their late-night "Anahuac" antics and the origins of the "fesstivaal" rallying cry, while chronicling its musical evolution and recordings over three decades and spotlighting its talented roster of players, from Mark Vann and Tye North to Bill McKay, Bill Payne and others.

With nearly three decades under its belt, the band deserves a fitting ode to its accomplishments and longevity, and Newby has done his homework. Thirty Years is sure to please all who have come to appreciate the best of what Leftover Salmon's never-ending festival has to offer.

From the preface of Newby's Leftover Salmon: Thirty Years of Festival:

"For Leftover Salmon, the party has not ended, as few bands have been able to stick around for thirty years . . . Even fewer bands leave a legacy that establishes them as a truly special, once-in-a-lifetime band. And no band has done all that and had as much fun as Leftover Salmon.

Since their earliest days as a forward-thinking, progressive bluegrass band who had the balls to add drums to the mix and was unafraid to stir in any number of highly combustible styles into their ever-evolving sound, to their role as a key player in the jamband scene that emerged in the nineties, to being pioneers of the modern jamgrass scene, through days of tragedy and rebirth, to their current status as elder statesmen, they have cast a huge, influential shadow . . .

Their story starts in Boulder, with a chance encounter between two young musicians in the Walrus Saloon on a late October evening in 1985. Emmitt was there playing a show with his Left Hand String Band and Herman, who had just arrived in Boulder early that day after a cross-country drive from West Virginia, stopped in looking for a beer, a burger, and some bluegrass music to listen to. The two become friends. They began playing music together whenever the opportunity arose, at house parties, in the Left Hand String Band, and in the campgrounds of the bluegrass festivals they frequented around Colorado. At one of those festivals in Telluride in 1989, they met a banjo picker, Mark Vann, from Virginia, whom they recognized as a similar musically mischievous soul. After a couple of campground jams and a late-night show at the Roma during that Telluride Bluegrass Festival, a new band—Leftover Salmon—was formed...

During that time, they have released eight studio albums, three live albums, played over four thousand shows, and been at the forefront of the jamband and progressive bluegrass scenes. Through those years the band has experienced turnover in their ranks. Each of those lineups defined an era and the sound of the band and furthered the story. Each chapter in this book reflects the change in personnel as they are named for various members of the band. Salmon’s story is told chronologically with those different band members serving as guide-posts for the journey.

Like their musical forefathers Hot Rize, New Grass Revival, and Little Feat, they have achieved greatness, suffered loss, and found rebirth. Like so many bands who experienced tragedy and hard times, Leftover Salmon could have easily faded away and become a footnote in the long history of American music, but much like their namesake, they persevered, swimming upstream through obstacles and struggles, and in year thirty are still standing and playing some of the best music of their career."