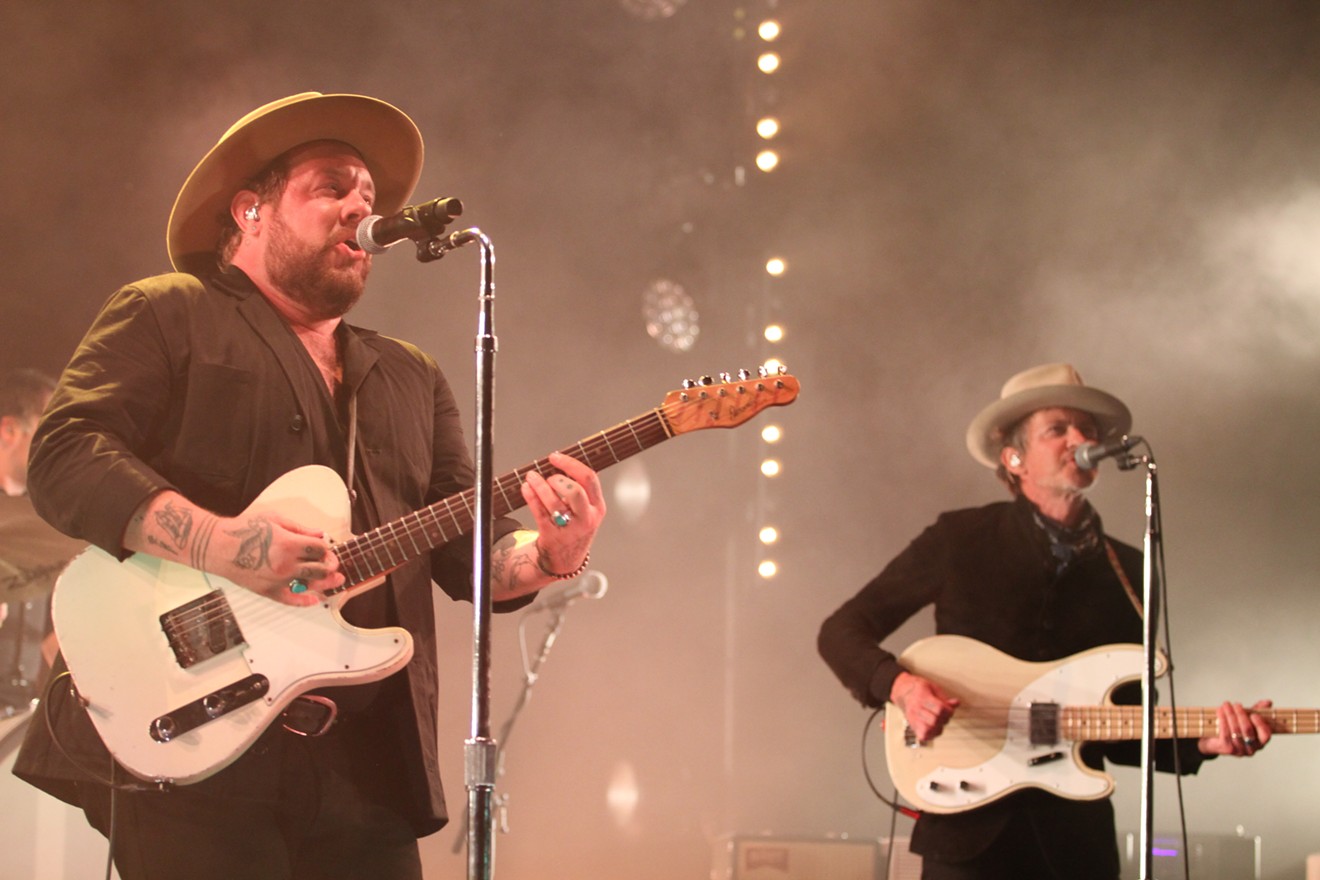 Nathaniel Rateliff & the Night Sweats played the first of three nights at Red Rocks Amphitheatre on Monday. Jon Solomon
"The last time, we played here for no one — literally, for no one," said Nathaniel Rateliff, Monday night, a few songs into the first of his three-show Red Rocks run with his band the Night Sweats. "It’s a nice change of pace to see all your faces.”

The 9,500 person venue was packed — quite different from his record-setting five shows in a row he played in 2020, when the crowd was limited to 175 a night. At those gigs, he was celebrating his solo album And It’s Still Alright, and many of the performances have been memorialized on his newly released live album, Red Rocks 2020. The Night Sweats also played a sixth show last September to a totally empty Red Rocks for the virtual Unpaused festival.

Clearly, performing at a sold-out Red Rocks Monday night was a completely different experience. The band and the crowd fed off each other's energy, particularly about three-quarters of the way into the set, when the group played the chugging, hard-hitting new single “Survivor,” one of five new cuts that will drop on the upcoming album The Future, slated for a November 5 release on Stax Records.

As the band launched into the upbeat, funky soul of “Coolin’ Out,” the energy elevated. The air was electric. Everyone was on their feet, hands raised and clapping. We were all part of something much bigger than ourselves, something not quite tangible but that felt good — really fucking good.

And whatever that feeling was, it just kept getting better and more powerful, with the band giving more and the crowd throwing it right back at the stage. Things kept intensifying during “Intro,” as Rateliff slapped the tambourine in time to the band's upbeat vigorous soul, fueled by Luke Mossman’s staccato chords, Joseph Pope’s pulsing bass and Patrick Meese’s syncopated drumming. 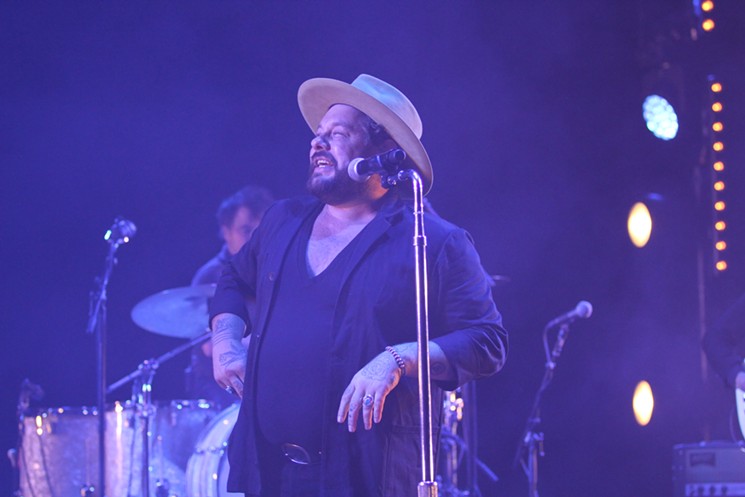 Nathaniel Rateliff & the Night Sweats played the first of three nights at Red Rocks Amphitheatre on Monday.
Jon Solomon
That energy soared through the venue with “I Need Never Get Old,” as the crowd clapped along, maybe harder than any of us have clapped before...until fans took it up a notch for “S.O.B.,” singing along to the song’s “oh oh oh"s. By the end of “S.O.B.,” the crowd's voices almost overpowered the music while Rateliff knelt in front of the stage with a single light illuminating his face.

The exuberant vigor flowing through both the band and the crowd during those five cuts was damn near magic, while the first part of the night, as strong as it was, only ramped up to the climax. There were new cuts like the driving “So Put Out," the horn-heavy “What If I” and the mid-tempo, ’50s-inspired, soulful “Love Me Till I’m Gone.” Other highlights of the night included “Wasting Time,” with Rateliff hitting those high notes after the horn breaks, and “Redemption,” a tune from the film Palmer that the band played on Saturday Night Live last February. The crowd even sang “Happy Birthday” to Night Sweats saxophonist Andy Wild.

During the encore, as the opener Delta Spirit returned to the stage, Rateliff mentioned that he and that band were once label mates on Rounder Records. One of the guys who brought the two acts together was Richard Swift, the producer and singer-songwriter who produced the Night Sweats’ 2015 self-titled debut and 2018’s Tearing at the Seams. (Swift died in 2018 at age 41.)

The Night Sweats and Delta Spirit, which had kicked off the night with a potent set, teamed up for Swift’s song “Lady Luck,” with Rateliff and Delta Spirit singer Mathew Vasquez trading falsetto parts.

Rateliff has played most of this city’s venues since and he Pope moved from rural Missouri to Denver about two decades ago. They started at smaller spots like the Mercury Cafe, the hi-dive and the Larimer Lounge, and he worked his ass off, gradually moving his way up to bigger gigs at the Bluebird, Gothic and Ogden theaters.

Over the past few years, he's made his Red Rocks gigs an annual headlining tradition. And if anyone in the state deserves to sell out the storied venue three nights in a row, it’s Rateliff. He’s one of the few singer-songwriters in the country who could pump foot-stomping energy through the venue with the Night Sweats and then have an audience in tears with heartfelt solo material.

Nathaniel Rateliff & the Night Sweats play at Red Rocks Amphitheatre at 8 p.m. Tuesday, August 24, and Wednesday, August 25. The concerts are sold out, but there are resale tickets available.
KEEP WESTWORD FREE... Since we started Westword, it has been defined as the free, independent voice of Denver, and we'd like to keep it that way. With local media under siege, it's more important than ever for us to rally support behind funding our local journalism. You can help by participating in our "I Support" program, allowing us to keep offering readers access to our incisive coverage of local news, food and culture with no paywalls.
Make a one-time donation today for as little as $1.