This Pop-Up is Ready to Boogie Down, Reviving Denver's Disco Dance Scene

The entry into RiNo's Yeah Baby dance club. Yeah Baby
Denver's downtown is about to father a Neon Baby.

Younger sister to the popular Yeah Baby nightclub in the RiNo Art District, Neon Baby will pop up at the edge of LoDo for the first time on May 9. The disco club will serve up specialty cocktails and a late-night dance party as it tries to fill the void that Yeah Baby is leaving while it closes for renovations.

Though originally slated to be a six-month pop-up, Yeah Baby will ultimately become a permanent installation. Creative director Josh Sampson attributes this decision to the outstanding community response to the project. Sampson says that his idea for a disco club was inspired by his days working in the Brooklyn music scene. While cities like Los Angeles and New York have every kind of nightlife imaginable, Denver lacks a ’70s-themed discotheque.

Once he realized this, Sampson knew he was on to something. "We’re looking forward to reimagining nightlife expectations with weekly dance parties that celebrate the possibility of transformation,” he says. Juli Williams
The Neon Baby pop-up will open in the infamous Mattie Silks House of Mirrors, at 1946 Market Street. Erected in 1889, this historic Denver building housed a high-end bordello from 1889 to around 1915. Forced to close by federal law, the House of Mirrors was abandoned.

Between 1920 until 1998, the former brothel did time as both a Buddhist temple and a warehouse. Lodo's Bar & Grill bought the House of Mirrors space next door four years after the Ballpark bar opened, planning to use it for special events.

The space "never gained traction as more than that," says Matt Runyon, a partner in Lodo's. And late last year,
MCSV Holdings I, LLC, a joint venture between Kenneth Monfort of Monfort Companies and Jason Marcotte and Matt Runyon of Summit Capital Venture Group, took on the space when it acquired the Lodo’s Bar and Grill portfolio, including the three restaurant locations: 1946 Market Street, 8545 South Quebec Street and 3053 Wes 104th Avenue in Westminster.

Neon Baby will mark the first time in decades that the Mattie Silks space will be "really, fully utilized," Sampson notes.  And what better way to use it than by taking a brothel-turned-temple space and making it a temple-turned-disco? 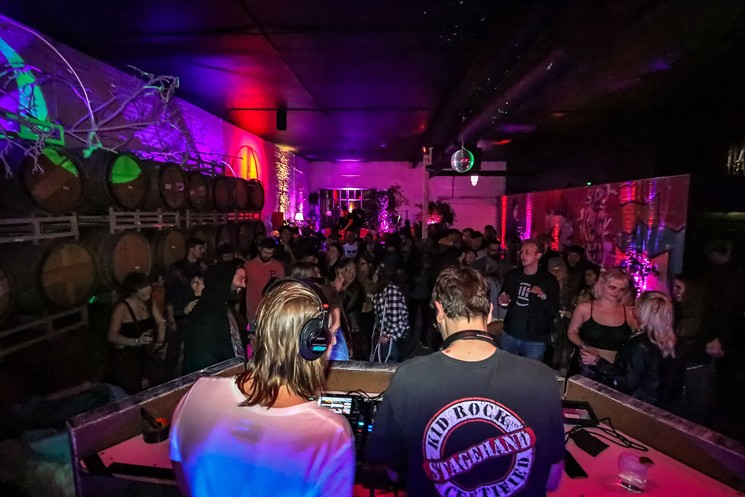 Yeah Baby
But it's not just the House of Mirrors that needs this Neon Baby. Lodo's needs it, too, Runyon admits. Neon Baby will "bring new life to a very historic centerpiece within our community, building on our mission to make Lodo’s relevant again.

"It's difficult to start fresh, you know," he adds. "There are pre-conceived notions about Lodo's, and we're really excited about taking the next step to changing those. To take the next steps as a business, and bringing Lodo's back to life, we need to invite new communities of people to find [us], perhaps for the very first time."

Neon Baby will be open Thursday through Sunday, hosting weekly events, pouring "magic cocktails" and steeping party-goers in a disco experience. Though an end date is not confirmed, owners plan for the club to operate for around four months, as they work on Yeah Baby's renovations.

Neon Baby will open for business at 9 p.m.Thursday, May 9, in the Mattie Silks Building within Lodo’s Bar & Grill at 1946 Market Street.
KEEP WESTWORD FREE... Since we started Westword, it has been defined as the free, independent voice of Denver, and we'd like to keep it that way. With local media under siege, it's more important than ever for us to rally support behind funding our local journalism. You can help by participating in our "I Support" program, allowing us to keep offering readers access to our incisive coverage of local news, food and culture with no paywalls.
Make a one-time donation today for as little as $1.

Lauren Antonoff is a Denver native dedicated to telling Colorado stories. She loves all things multi-media, and can often be found tinkering in digital collage. She joined the Westword team in 2019, where she serves as the Audience Engagement Editor — connecting people, ideas, and the stories that matter.
Contact: Lauren Antonoff