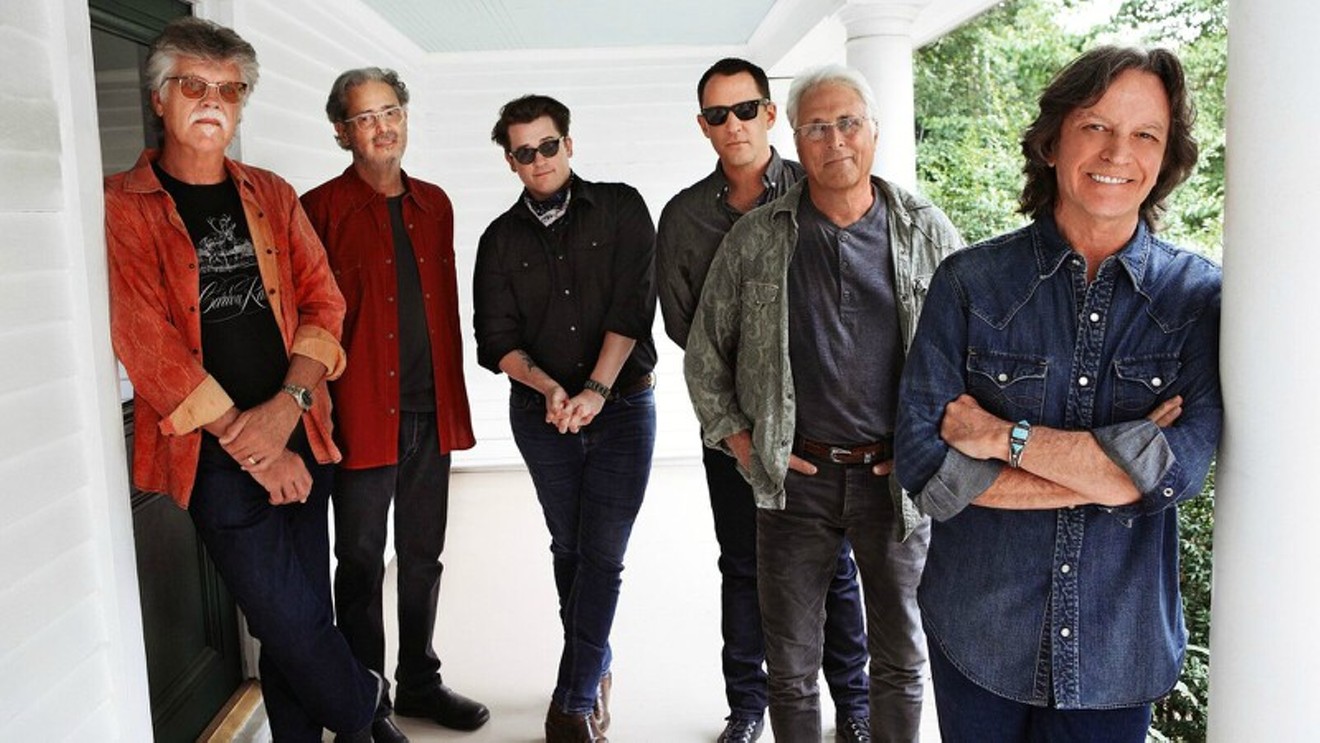 Jeff Hanna, right, and the current lineup of the Dirt Band. Photo by Glen Rose
The Nitty Gritty Dirt Band, which plays the Paramount Theatre on October 19 with Leo Kottke, is still considered a Colorado band, even though none of its current members live in the state. But singer, guitarist and Colorado Music Hall of Fame inductee Jeff Hanna thinks that’s appropriate.

“We consider Colorado our spiritual home,” he says. “And we have for years.”

That makes sense. Like Kottke, the Nitty Gritty Dirt Band was long managed by Colorado promoting icon Chuck Morris, making the Paramount gig a reunion of sorts. Moreover, Hanna actually lived in the Denver suburbs as a kid before returning to the metro area after a California earthquake left him and his bandmates feeling rattled — and he stuck around until the mid-1980s, when he relocated to Nashville amid the group’s transition from country-rock royalty (as epitomized by 1972’s Will the Circle Be Unbroken, a landmark melding of genres and generations that spawned two sequels) to straight-up country stars.

Over the years, a slew of notable musicians have drifted in and out of the Dirt Band lineup, including Jackson Browne, ex-Eagles member Bernie Leadon and longtimer John McEuen, whose most recent departure happened last year. But Hanna and drummer Jimmie Fadden have remained in the saddle for the half-century-plus history of the group.

Not that Hanna is averse to change. In 2018, membership has shifted again to include a couple of key contributors — notably, his son, Jaime Hanna, who’s had a stellar career of his own (including a duo with Jonathan McEuen, John’s boy).

In the following Q&A, Hanna discusses the group’s history, fresh material, the current state of the music industry and how vital the Nitty Gritty Dirty Band feels to him in 2018.
Clearly, the circle is still intact. 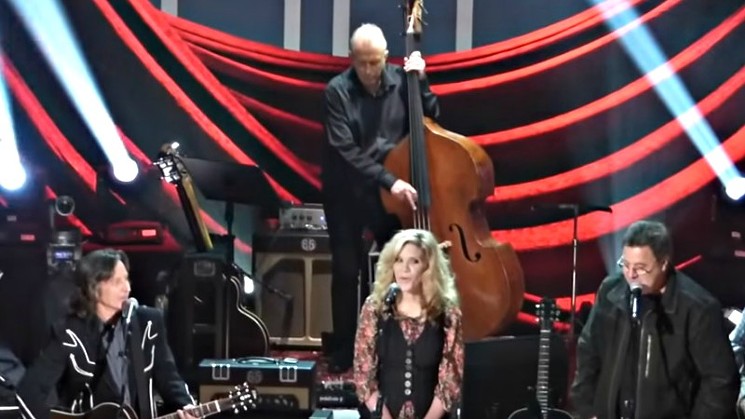 Jeff Hanna sharing the spotlight with Alison Krauss and Vince Gill at the Dirt Band's fiftieth anniversary celebration in 2016.
YouTube
Westword: You guys started as a band way back in 1966. When did you first come to Colorado? And was Chuck Morris the impetus for you coming?

Jeff Hanna: No, actually, we met Chuck in Colorado. A little background: I lived in Colorado when I was a young teenager. My dad was in the aerospace business and he got a job at Martin Marietta aircraft in Denver. I was in middle school — junior high, we called it back then — and I lived in Littleton. I went to Grant Junior High and then Euclid Junior High. I think it was eighth and ninth grade.

I fell in love with Colorado. We moved there from Arizona, which was great, but I preferred the mountains to the desert. I loved the place. Unfortunately, my dad got transferred again at the beginning of high school, and we moved to Long Beach, California — but I'm glad we did, because I wouldn't have been in the band otherwise.

The way our band started, it was me and my best friend from high school, a guy named Bruce Kunkel, we had a jug band. And when I got into my very brief college career, we just sort of revamped that jug band. So the six of us got together and did that, and eventually we changed gears and became a country-rock band in the late '60s.

Before long, we started gigging in Colorado. I told everybody, "You're going to love this place. It's so great." So we played at a club downtown called Marvelous Marv's. Later it became Ebbets Field, which was one of Chuck's places. After playing in the winter of '70, I think, the guys all started going, "This is pretty great. Let's get out of L.A." Then there was a big earthquake, and we were like, "That's a sign."

We all packed up and moved to Colorado. We spread out all over. A couple of the guys moved to the Western Slope, to this place called Aspen that used to be a little hippie ski town (laughs). It was very different then. It's still beautiful, but now, it's above my pay grade. And the rest of us scattered throughout the foothills. I lived in Arvada for a minute, and then all the Eastern Slope guys ended up in Evergreen.

I think we met Chuck before we'd actually moved. We played Tulagi's in Boulder, which is how we befriended him. That was really great, really cool.

When was the period you personally lived in Colorado after returning?

I lived there from '71 to '85, so a total of sixteen years in Colorado for me, counting junior high.

Were you in Evergreen for most of the time after coming back? Or did you move around a bit?

I was in Evergreen for six or seven years, and then I moved up to Aspen, actually, and lived there from late '77 to '85, when I moved to Nashville, which is where I live now.