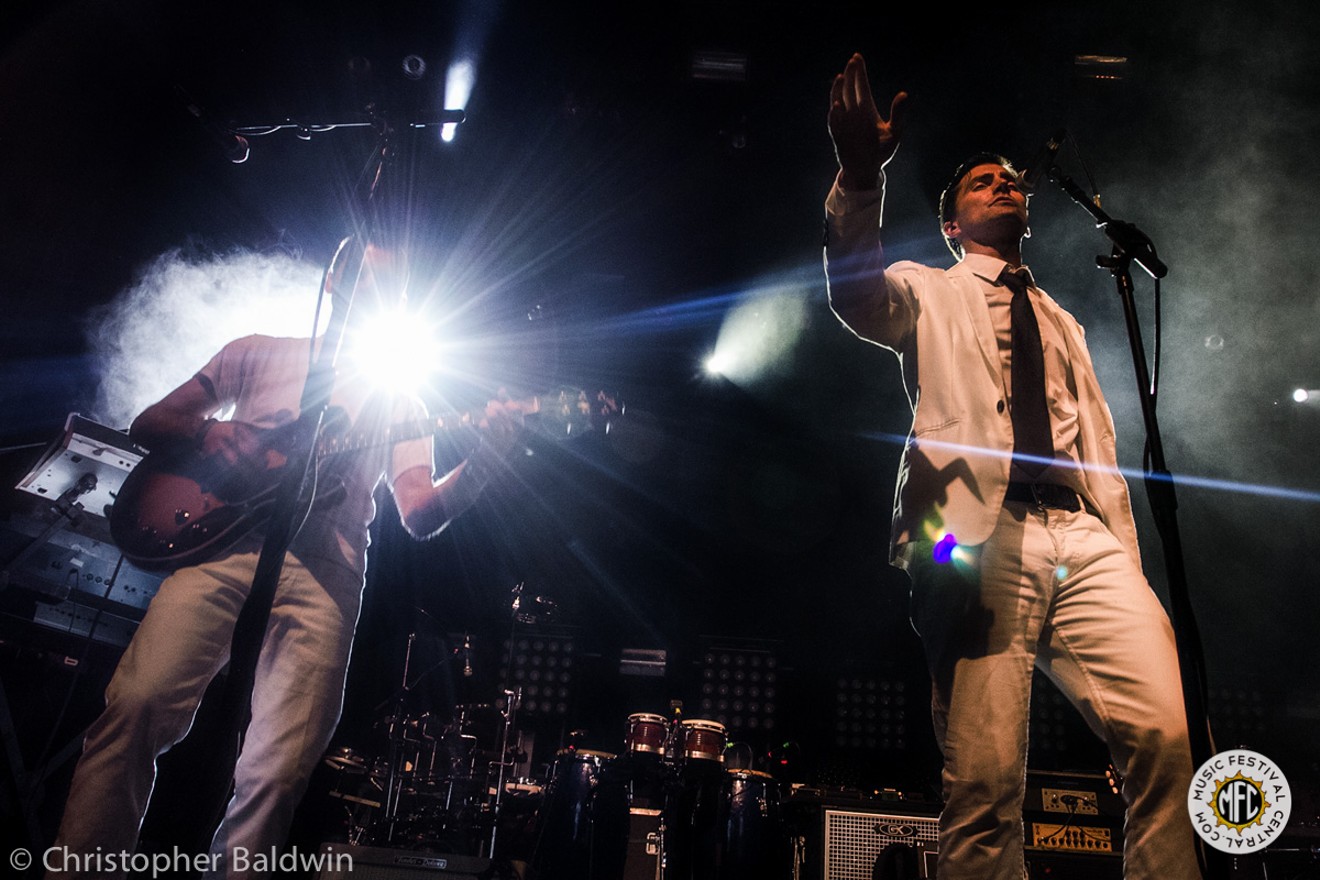 Pan Astral will perform at Lost Lake Lounge this Saturday, February 3. Christoper Baldwin
The members of Pan Astral don't care much for genre. Using a wide variety of instruments, the Denver indie-electronic band creates a rich sound and uses lights and visual elements — often in collaboration with other artists — to provide audiences with a full, immersive experience. Why? So fans can dance.

This Saturday, February 3, at Lost Lake, the band's music will be paired with visual atmospherics designed by local artists in the public art, light and sound group Knomad Colab.

Ahead of the show, we caught up with singer Gabriel Otto to talk about his guest performances taking on the role of David Byrne in Talking Heads tribute concerts with the jam band Lotus, why genre can limit a band’s sound, and how performing is cathartic.

Westword: How did the indie-electronic path come about for Pan Astral? Why do you enjoy working within it? I feel it gives [the music] some room and flexibility.

Gabriel Otto: I’ve always loved classical and jazz music, since I was really small. I’ve loved the sound of the piano and experimentation that jazz has to offer. But I was sometimes alienated by it. It would get a little academic, if you will…but in rock or pop or any music with lyrics that are pertinent to the times, there was an accessibility that was more emotional. I was able to access that music. Even that music, I felt there was a lack of richness that was found in classical and jazz disciplines.

So Pan Astral is an experimental band in that we layer a lot of different types of instruments. We use strings, horns, electric bass guitar, real drums, electronic drums — basically we use anything available to make the sound that we’re going for. So we don’t have limits that way, as many limits as maybe some other people would give themselves. Genre isn’t something we’re interested in. It’s something I actually think is limiting to anybody. ... I would like to think I could write a country song or a hip-hop song and it would just be fine; it would work within Pan Astral’s field of view.

I was really influenced by Miles Davis. That’s part of the reason why I think that way. I took a lot of what he says to heart. I read his autobiography a long time ago, called Miles. He talked about genre in a way that really opened my mind when I was younger. He was always breaking the rules. He had a vision and wanted to reach it by any means necessary musically. He broke into the electronic field. Herbie Hancock was doing all sorts of cool stuff in the late ’60s, and Miles was watching him evolve as an electronic artist. So Miles said, "Why not? Let’s go that direction." But he lost a lot of fans along the way and gained others. That type of confidence and commitment to the vision is very beautiful to me.

How do you look to convey emotion in your music? Is it in the tone of the song, explicitly lyrically?

It’s everything, it all plays to that — the texture, the key it’s in, when the chord changes, how the lyric is sung, the way Tad strikes the guitar. Everything specific is serving that emotional value.

When you've done Talking Heads sets with Lotus, what about those performances do you enjoy most?

It's a great adventure for me, sort of like traveling to an exotic place, because I get to jump into an entirely different world. I'm allowed to sort of step outside of myself, which can be really enjoyable. Like with theater, a lot of power and beauty can be expressed when you're channeling someone you feel a connection with. With Talking Heads, I'm mostly making things up on the spot in accordance with my loose interpretation of David Byrne, an artist I very much like, so this brings a wonderful kind of inspiration to the performance. The audience seems to somehow sense this, and it's really fun to watch them respond. None of this would work out so well if it wasn't for the fact that Lotus is a very tight band who know each other well, musically. With them, all of the instrumental bases are covered, save a couple songs when I play guitar. So being sans instrument allows for greater freedom with my body, which I thoroughly enjoy, because it gives headroom for more spontaneous and bold dance moves. I'm able to really let go and enjoy myself on stage, because I trust them.

Like Talking Heads, Pan Astral shows are filled with high energy dance music, but the biggest difference for me is in the way they're emotionally charged. One girl I met after a Pan Astral show told me it sounded like a teenage love story, and it made me laugh but I kind of liked it. For me, that volatile energy is evident when I'm performing with this band. There's a beautiful kind of intensity and lightness to the music that I love, and it's unapologetically earnest, even when we play another band's song. Talking Heads Revisited was a bit of a different case for me, though. This was a whole performance dedicated to someone else's music, which warranted partially stepping into their character, and that was both freeing and constraining for me, because in one case, it sort of amplified a particular expression, which is exciting, while limiting others. Luckily for me, there are a lot of similarities between Talking Heads and Pan Astral, and I feel very much at home performing it all.

How is performing cathartic to you? Why do you feel this release is so important, like the step beyond just making music in the studio? What do you think performance adds to or enhances about the music itself?

Part of the catharsis comes from my — likely insane — notion that I'm free to get personal with an audience in a way that I sometimes find it difficult to do with individuals. For some reason, I'm not afraid of being judged or ridiculed by a giant mass of people; I feel like they're all on my side. The catch is that I'm usually telling them something very personal, but it's been worded in a way that usually only makes sense to me.

The other part of the catharsis comes from the fact that I seem to have found no other way to communicate certain things that need to be expressed outside of dance and musical performance. These beautiful moments of communication, when they do happen, are transcendent experiences where the moment becomes sort of super-real, and I feel a deep connection with the audience that is here and gone, so I guess that part of it is sort of like a teenage love story. There are times during a performance when a weight has been lifted, and when it's all over, it's like I've had a massage or a good cry.