Photo by Vince McClellan
Parquet Courts’ new record, Wide Awake!, set for release on May 18, is a package of joy and anger. Singles “Wide Awake” and “Almost Had to Start a Fight/In and Out of Patience” give audiences a taste of the punk-forward album, produced by Danger Mouse, and a duality of grim messaging camouflaged by dance-inducing rhythms.

“It’s interesting the way that punk — especially hardcore coming [from] the late ’80s — has this way of addressing a positive subject matter, but sounding very angry or something that is comically negative,” says frontman Andrew Savage.

The homage to ’80s punk fits well in 2018, as Denver fans will see when Parquet Courts hits the Gothic Theatre on April 29. Anger backed by a funk beat is a refreshing response to the punishing negativity of 2018 U.S. culture. We talked to Savage about American nihilism, working with Danger Mouse and what grates on his patience.


Westword: You said that the record is a rejection of nihilism because there's too much of that in America right now. But do you really think that's true? High school students are leading movements, and there have been global protests.

Andrew Savage: I don't think what we're talking about is mutually exclusive. No, I think that's quite inspiring. [Protests] are a response to nihilism. I do think that there are some incredibly nihilistic people that are running the country right now who are making policy. There is this battle, because nihilism was the thing that led us down the path to where we are now. Demonstrations don’t mean that the nihilism isn't there. If anything, it means that it is there, and they are a direct reaction to it. What you’re citing is a perfect example, because I think that the idea of taking money from arms manufacturers and the NRA in the event of mass death is textbook nihilism right there. What we're seeing is these kids that have a reaction to that. They’re acting with their hearts and very passionately. And that's the kind of thing that I want to encourage in American culture and what I want to celebrate on this record. Parquet Courts will be at the Gothic Theatre on April 29.
Photo by Ebru Yildiz
In “In and Out of Patience,” you mention things you’re impatient with. What causes you to have a short fuse?

On a record with a lot of heavy grievances on it, [that song] is the one where grievances are a bit more petty, like complaining about the subway. It's the classic “fuck everything today” punk song. It’s probably the most humorous song on the record.

Do you notice yourself getting more impatient?

It’s something I'm working on. It's something I'm trying to be mindful of. I would like to think I'm getting less impatient, but that is a tough thing to fight against, because it’s like a defense mechanism. You gravitate toward expressing your frustrations when it comes to, I don't know — people walking too slow is a big one for me. Obviously, everyone should be able to walk at their own pace, but I think there's a kind of respect New Yorkers have for each other, where we just walk ninety miles an hour out of respect for our fellow man.

You have a visual-arts background and do all the artwork for Parquet Courts. Is writing songs a visual process for you in any way?

Oftentimes, yes. I have an association with sound and vision, so color is a big part of that, which is why is a very important thing with Parquet artwork. But, yeah, a lot of times there will be some sort of — even before there are lyrics — there'll be some sort of a vision.

When I was writing "Freebird II," I was playing an organ part on there — I hadn’t written lyrics for it yet. Sean [Yeaton] was like, "This sounds like the credits to a movie about the Vietnam War." I was like, 'Yeah, it kind of does.' I still kind of see that even though that didn't inform the song's lyrics at all. I still see a helicopter scene whenever I hear that song.

What did you learn from Danger Mouse [Brian Burton] during the process of making this album?

One thing I've learned would be to follow an idea past the point of it being done. His biggest contribution to this record was this objective voice, someone who could see the band objectively very well and say, “You know, this is an idea that you think it's done, but why not take it one step further?” He taught me to question if an idea is truly finished.

What was that like for you? It seems like you’d have a general sense of when something's complete.

I've got a pretty good idea when I'm finished with something and when something works. I'll use the song “Violence” for an example. It was a song that we had considered done — like we had pretty much the whole record — before Brian even came into the scene. There was just one bass line in that song. And [Burton] was like, “The song is great. I want to encourage you to write one or two more bass lines for the song, though.” I was like, “No, it's done. We're done with this one.” And he's like, “Yeah, that might be. You might be done with it. Sure. Um, but, uh, you know, write two more bass lines that could potentially go on the song.” And we ended up using them. It’s a completely different song for that reason. 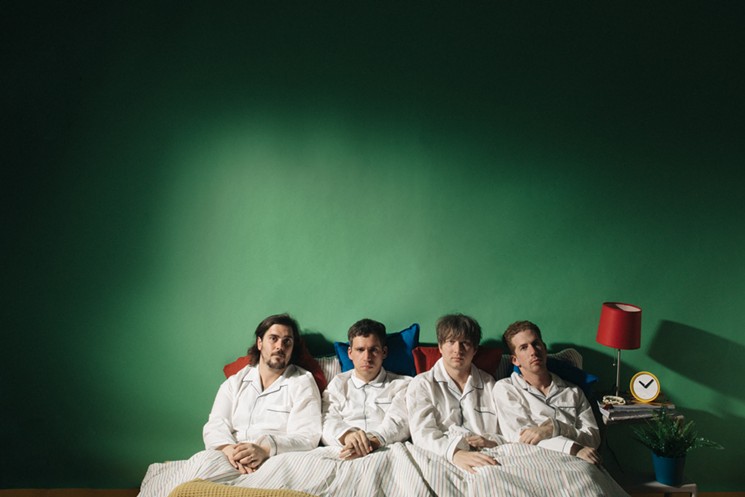 Parquet Courts
Photo by Ebru Yildiz
How much did he influence the sound?

I think a lot of people are going to assume, because it's a more rhythm-focused record, that we sought out this producer to get the sound, when, really, we had the record written. It was a rhythm-focused, punk-influenced record before we really even knew who he was, which was pretty much when we found out he asked us to be a part of it.

What’s more important and more significant is that he's a nuanced producer. The talent that he has is really [being] able to apply himself to the band that he's working with rather than have the band conform to his style. He was coming into our world. It sounds like a small thing to ask the question if an idea is finished, but it actually changed the record a lot. He was able to see certain patterns in our songwriting that maybe we had fallen into and made us question that.